And it is a holy thing, and it is a precious time

And it is the only way

Forget-me-nots among the snow, it’s always been and so it goes.

The gist of it was that “God can do what He wants.” She [this was the Church of Ireland, not a Catholic church] told the familiar Easter story about how the disciples searched for Christ’s body after he was taken down from the cross.

“This was the most important thing that had ever happened in the history of the world, and yet, it is a story of confusion, mixed signals, and false starts. It is a very human story; we never know what is really going on.”

Gravity happens, whether we do anything or not. But if we want to fix the roof, we better get out our tools.

In a recent poll from Gallup, more than half of millennials (people in their 20s and 30s) said they have a positive view of socialism.

The rest seem content with capitalism, provided it is “reformed.” Even The Sunday Times of Dublin took up the theme in an editorial: “Capitalist, it’s time to heal thyself.”

But is capitalism something you make happen, or something that happens to you? And if it gets sick, can you heal it?

We saw last week that the biggest burst of stimulus in the U.S. – $3.6 trillion of quantitative easing (QE), negative real interest rates for 10 years, and deficits of $11 trillion – brought the weakest recovery ever.

The activists wanted faster growth. But they couldn’t make it happen. GDP crawled forward at barely half the rate of the 1950s, ’60s, and ’70s. Wages were basically stagnant. So were pre-tax corporate earnings.

The Japanese couldn’t make it happen, either. Stimulus had no greater effect on the Nipponese Islands than it did in the USA.

In the entire 21st century, so far, the Bank of Japan (BoJ) increased its holdings (monetary stimulus… the base money supply for the nation) some seven times.

During the same period, the Japanese feds increased government debt (fiscal stimulus) from 100% of GDP to 250% – the biggest increase ever seen in a major economy.

The BoJ also stimulated the stock market directly, by buying $250 billion worth of ETFs, and is on its way to nationalizing most of the country’s industries by buying up shares with the money it printed up itself.

Note that nobody knows where this will lead.

But note also that all this Godzilla of stimulus has produced almost no growth. Japan’s nominal GDP is up less than 6%, total, for the entire 18-year period.

The latest stimulus program in the U.S. is the China Deal – the supposed end to the U.S.-China trade war… said to be coming soon.

Will that finally “stimulate” the economy as advertised? Or is economic growth, like the capitalism that brings it about, not subject to gimmicks, deals, and stimulus?

We’ll leave these questions for another day. But before we leave, a quick update from the Irish countryside…

We came back to Ireland to move into our newly renovated houses. But when we visited on Friday, we found workmen still putting in doors and windows. The fireplace had not been built. The floor tile had not been ordered. The painting had barely begun.

Bill checks the progress of his Irish home

We were supposed to move in before the end of the month. Not going to happen. We’ll be itinerant, homeless drifters, at least until the end of May.

“What happened,” we asked.

“Irish time,” said a friend. “No building has ever been finished on time in Irish history. It’s not God’s fault. It’s man.”

We went back on Saturday and got to work ourselves. There is an abandoned cottage on the property. The rafters had rotted and about half the roof had already collapsed into the house.

We pulled the rest down and cleaned out the debris. Our plan is to put on a new tin roof as quickly as possible. At least then we’ll have a place to store our tools.

Bill prepares for construction on the old cottage

When the roof came down, so did the stone wall over the windows. The lintels were rotten, too.

On Sunday, after Easter services, we replaced the lintels with treated wood, mixed up some lime and sand, and began rebuilding the stone work.

Next weekend, we’ll be able to put on the sill plate and begin framing.

That is, if it doesn’t rain.

U.S. public pensions have been drowning in red ink for a decade now…

That’s the story of today’s chart, which maps the gap between public pension liabilities and assets going back to 2002. 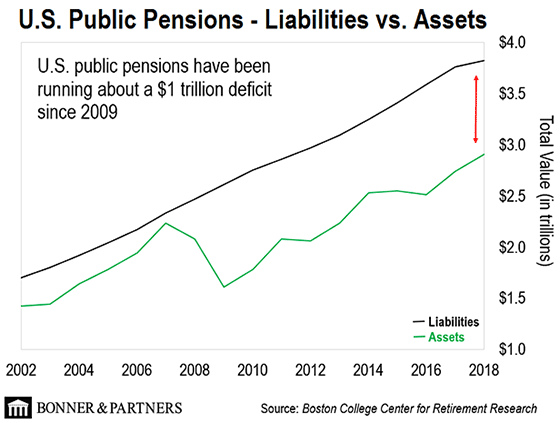 As you can see, U.S. public pensions have run roughly a $1 trillion deficit for 10 years now.

You see, public pensions invest in conservative assets like government securities, investment-grade bonds, and blue-chip stocks. These assets are not usually volatile… except when financial markets meltdown, as they did in 2008.

As you can see from the chart, public pensions took a $600 billion hit as the financial crisis played out. But liabilities kept going up.

What’s more, the looming bear market we have been warning about will make the situation much worse.

After all, if public pensions could not “catch up” during one of the longest bull markets on record… When will they?

That means there are only three potential outcomes to close the pension gap: higher taxes… reduced pensions… or federal government bailouts (money-printing).

Or perhaps a combination of the three…

Why Everyone Believes They’re “Middle Class”
As our editor said last week, the American middle class is finding it impossible to keep up. But what does being “middle class” really mean? For as much as politicians address “middle class” America, you’d think it would be more clearly defined… well, it’s not…

Is Capitalism in Crisis?
There seems to be a growing unpopularity of billionaires and their giant tech companies. And for the first time in decades, capitalism’s future is a subject of debate among presidential hopefuls. Is this all just finger pointing? Or is the U.S. in the midst of a billionaire overthrow?

The “Domino Effect” Will Shoot These Stocks Higher
Regular readers know Bill is bearish on U.S. stocks. But, former Cantor Fitzgerald partner, Jason Bodner, is much more bullish. In fact, he believes big institutional investors have been plowing into stocks at a breakneck speed… and that well-positioned investors will see big gains ahead…

Today, dear readers share their enjoyment of Bill’s “cornucopia of disaster” in Russia…

Bill, I get your newsletter for your writing about life, the world, and economics. Today, I was rewarded in spades. I read Ludwig von Mises when I was in my teens and have been studying, thinking, and writing about economics ever since. I’m now 75 and still going strong. I loved your short definition of capitalism. It said exactly what was so, with nothing fancy or confusing added.

Most of my life, Austrians, libertarians, and free market people talk only to each other. The rest tune this talk out because they don’t understand it. Your definition is right on the money and said in simple language. My writing will be greatly informed by your statement. I’ll be giving you credit for sure.

Your Diary entry, “Our Trip to Soviet Russia: A Cornucopia of Disaster” was one of your most powerful yet. The description you gave of life in the Soviet Union was nightmarish, all the more so, because it was accurate. It should be required reading for AOC, Bernie Sanders, and all other wannabe socialists. It would be a very short elevator ride from where we are in America today, down to where Russia was under the Soviet system. If the radical left has its way, they’ll herd us all into the car and stab the “down” button.

One note about Sanders… Since it was revealed in the media a few days ago that Mister Bernie is a millionaire, I find it very curious that he constantly vilifies the “one percent” when he’s one of them. Of course, most of the jackasses in both houses of Congress are also millionaires, so he’s not alone. No wonder we’re so screwed!

Meanwhile, the socialism vs. capitalism debate rages on after our editor posits: “What if America Tried Capitalism?”

Socialism is not communism. First, it remains democratic. This is important. Change needs to be supported and the greater the change is argued for, the greater the need is for that mass support. Wars concentrate minds. Which is why great changes happened entirely peacefully and without the need for revolution. America has let the logic of capitalism have free reign when it has to have regulation. It’s like an engine revving out of control. What will be the result? America’s carbon footprint is vaster than any other place on Earth, and its economic unfairness has become obvious to the mass of people. If political change is not forced soon, and large-scale social changes enacted, then climate change will do it for man, regardless.

It doesn’t matter whether a system is supposedly a capitalist or socialist one, as corruption will eat the reality out of either, and commonly does. Corruption is also a natural human activity born of the endless competition for scarce resources in subsistence life that dominated human existence for millennia. Simply no true free market system has ever existed, nor does one exist now, unless you can find a truly anarchic society with no rules at all. That is a pure market economy in the raw.

Bill’s points are well taken. We’ve seen what socialism yields: very little. This current round of socialistic talk is opportunistic in nature, caused by the growing disparity in wealth, privilege, education, and who has a future and who may not, at best. Socialism appeals to some… The politicians are happy to exploit that and expose themselves in the process as the bad brains they are. There will always be those caught in vicious social loops. We should be talking about how to get them out of it, not how to put them to sleep with handouts and have these brain-dead politicians keep them there.

And this Wednesday, April 24 at 8 p.m. ET, he is unveiling his own breakthrough system, which he says can spot the market’s fastest-growing stocks up to 30 days in advance – and you’re invited.

As an attendee, you’ll have the chance to claim his No. 1 recommendation. And the profit potential could be enormous – as much as $9,385 in one trading day. Plus, he’s giving away a special three-part masterclass for free when you register now. 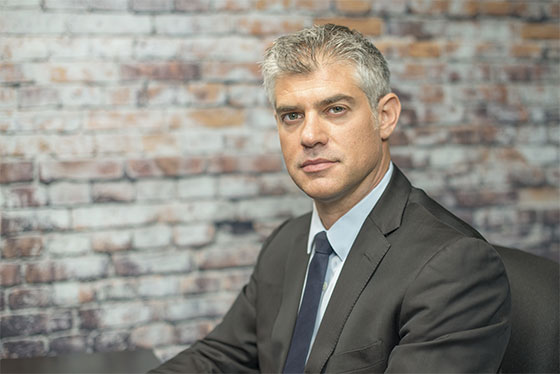