PORTO, PORTUGAL – “I wonder what the suicide rate is in this hotel?”

We posed the question this morning, not expecting an answer.

We had been wandering the dark, labyrinthine corridors in search of an elevator. It is a newish place, designed to be cool. Minimalist. Hip.

Little light – either natural or artificial.

It’s the Hotel Teatro in Porto, in northwest Portugal. If you choose to stay here, be sure to bring an antidepressant.

The view of the lobby in the Hotel Teatro

But aside from the hotel, the more we see of Portugal, the better we like it.

Meanwhile, depression is on our mind… and on the table.

U.S. stock prices are almost 350% higher than where they were at the bottom of the 2008 crisis.

That has created a lot of new paper wealth among the wealthy. The “One Percent” are checking their stock prices and giving each other high fives.

The Bureau of Labor Statistics tells us that new jobless claims are down to levels not seen since the 1970s.

To hear them tell the story, we’re running as close to full employment as ever. Yes, Junior is parking cars… and gramps is greeting shoppers at Home Depot!

Yes, here’s the latest on our Doom Index from our head of research, Joe Withrow. [For more on what goes into Bill’s Doom Index, catch up here.]

After issuing a strong warning last quarter, the Doom Index has cooled down again. Our third-quarter reading was a “5” – one point below our warning level.

This is what happened back at the end of 2015 also. The Doom Index hit a “7” in the fourth quarter of 2015… only to cool back down over the next two quarters.

The Doom Index has never cooled off from an “8” without a major market crash first.

Credit growth and railcar use are the two metrics that improved significantly this quarter.

But U.S. stock market valuations are still high by historical standards. That is not going to change until this bull market finally dies.

In short, doom is guaranteed, but not today.

But what kind of recovery can you expect, when you finance it with fake money?

A fake recovery, of course.

The trouble with numbers is that they are easily suborned. They don’t lie necessarily; they just tell the truth you want to hear.

In the stock market, colleague David Stockman points to Tuesday’s 5% bump-up in Caterpillar stock, which drove the Dow higher. You’d think Caterpillar was doing a land-office business. But profits are no higher than they were 30 years ago.

Averages, too, are misleading. They combine rich with poor and leave the impression of a healthy middle class. Trouble is, it doesn’t exist.

The rich, the well-educated, the insiders, and the Deep State functionaries in favored ZIP codes are doing fine. But most people aren’t. After factoring for inflation, they earn less than they did in the last century.

Dalio divides the nation into the top 40% of earners, and the bottom 60%. Here, Bloomberg summarizes the two parts:

Meanwhile, if you are in the bottom 60% of earners, you’re twice as likely to die prematurely as the top 40%. And you’ll be sicker before you die, too. You’ll probably take opioids – such as oxycodone or hydrocodone – to ease the pain… or perhaps just the boredom.

And you’ll work longer, too.

According to the Economic Innovation Group (EIG), which promotes entrepreneurship in America, about 52 million Americans live in “distressed ZIP codes.” (We doubt ZIP codes are distressed; the EIG must be referring to the people in them.)

Job growth in distressed ZIP codes was negative on average from 2011 to 2015, trailing the average prosperous ZIP code by more than 30 percentage points.

Distressed ZIP codes were the only group in which the number of both jobs and business establishments declined during the national recovery.

Most distressed ZIP codes contain fewer jobs and places of business today than they did in 2000.

If that weren’t bad enough, Bloomberg piles on:

University of Michigan economists HwaJung Choi and Robert Schoeni used survey data to compare middle-age Americans’ health. A key measure is whether people have trouble with an “activity of daily living,” or ADL, such as walking across a room, dressing and bathing themselves, eating, or getting in or out of bed.

Depressing? Apparently. Ninety people per day die from opioids – prescribed by doctors and paid for by the U.S. government.

As Bill mentioned above, he hasn’t raised his “Crash Alert” flag yet.

But one of the eleven indicators that make up his Doom Index is nearing recession territory. 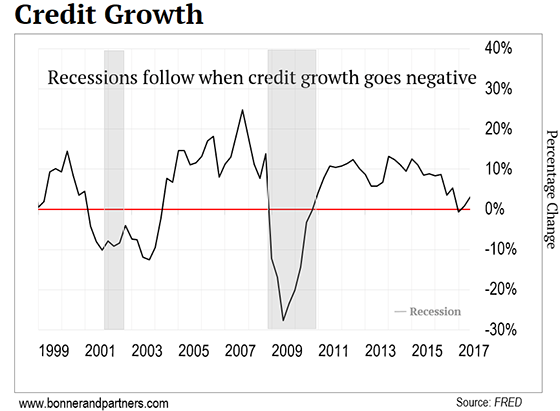 As you can see, annual bank loan growth is now growing at 3% – just above recession territory, in other words.

Portfolio Insurance 2.0?
During the 1987 crash, something called “portfolio insurance” is believed to have made the fall even worse. Now, this bull market has another type of portfolio insurance. And it’s getting clobbered.

How to Spot a “100-Bagger”
A “100-bagger” is a stock that returns $100 for every $1 invested. One of Bill’s top analysts, Chris Mayer, spent years researching these big winners. And he found that they all have three things in common…

The Automation of Everything
Automation has been on a slow march through the economy for over one hundred years. But only recently, automation in some industries has grown at an exponential rate. Here’s why.

In the mailbag, Trump remains a popular topic.

I recently read your book When the ATMs Go Dark, which was a good read. This Diary is a whole different animal.

It appears that your presidential news source comes from the Fake News media. Day after day, you attack our president. Day after day, you spew about increasing debt, the fragile economy, and crooked politicians. Yes, many of us are aware of that, but do you need to bang on the same drum every day? While President Trump is not perfect, he does have some admirable qualities, and I believe he is working to make good on his campaign promises. The guy has been in office for 10 months, working on issues that have frustrated us for at least 100 years. Be reasonable!

Could you discipline yourself to find a little ray of hope, or are you genuinely as disillusioned and angry as your writing indicates? I encourage you to jump off the manure spreader and look for some hope in that Good Book that you like to quote.

Bitcoin had an $18 billion market cap. Now it’s close to $100 billion. If tomorrow somebody decides to buy bitcoin at the market, and given how much they want, the price rises to $7,000 and they pay it, is all the bitcoin in the world now worth $7,000 per coin and that market cap now worth $200 or whatever billion?

If on the next day, 10 times as many coins are offered for sale by people who have decided they’ve made enough to live happily ever after, and the price drops to $2,000, is that market cap now $50 or $60 billion for something that, as you noted, can just disappear?

Not so long ago here in America, the federal government confiscated gold (made it illegal for citizens to hold), presumably to bring otherwise unreachable activity under taxation. Think government is going away? The only value provided by bitcoin other than as a speculation on a possible mania is the ability to do business without regulation or taxation. That’s the only utility that makes it special. Is that price a measure of mania speculation or are that many people trying to use bitcoin to shield wealth from confiscation (which is all taxes really are to a large degree)? I understand there are things public that need to be paid for, but taxation is perhaps the oldest racket known to mankind.

How does the publisher or Bill Bonner himself square Bill’s skepticism about cryptocurrencies with the obvious promotion of Teeka Tiwari?

Editor’s Note: Bill is skeptical of cryptocurrencies. But our colleague Teeka Tiwari is a self-described “bitcoin bull” and is very bullish on the sector. And that’s okay. Not all of our analysts and colleagues always agree with Bill, and we’re happy to share those differing views with readers.

Recently, Bill and Teeka sat down to discuss their views on cryptocurrencies and the future of these crypto assets. We’ll be sharing that interview with readers in the next few days. So keep an eye out on this space.

If you don’t know, Teeka Tiwari is our go-to cryptocurrency expert. He’s helped his readers make windfall profits of 20,000% (not a typo) in just over six months. He’s hosting a free training webinar on Thursday, November 2 to educate crypto newcomers about these assets. Save your spot for this free event, and watch today’s free training video, by simply clicking right here. 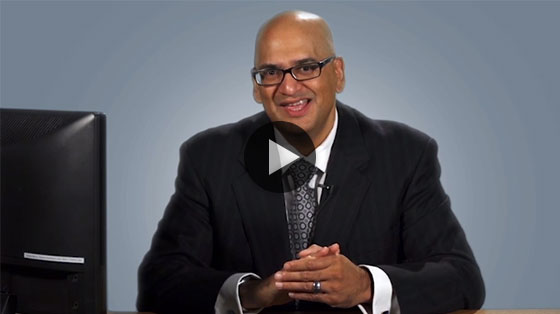