YOUGHAL, IRELAND – About the only nice thing about our sorry métier is that we never run out of targets.

We aim for claptrap. And wherever we go, we throw a beer can out the window; we are sure to hit it.

Here in Ireland, too… A public demonstration over the weekend proved that the Irish are at least as dumb as New Yorkers.

This weekend, we (almost) finished putting the roof on our cottage. The place was so derelict and so tiny, most people thought it was not worth saving.

It was abandoned, like the many thousands of abandoned houses in Ireland. On our little farm alone, there are three of these ruins hidden in the woods – just stone walls covered with ivy, laurel, and thorn bushes.

It was called “The Great Crumble.”

A half-century ago, the Irish were so burdened by derelict buildings – both grand and humble – that the then Minister for Development joked that people menaced the government “by threatening to leave us their houses.”

The little houses crumbled as their owners starved in the famine in the mid-nineteenth century… or left for America, Australia, or Canada. The big houses succumbed to taxes, debt, or IRA bombings.

And then, when prosperity finally came to Ireland, few people wanted to bother with the old wrecks. For the first time ever, Ireland had a middle class that wanted middle-class housing.

Some people think Hitler is living under the North Pole. Some think that Pi (π) should be rounded off to 3… to make it easier to remember.

Many think their government can make their lives better by stimulating the economy, banning drugs, or blocking foreign trade.

Often, claptrap affects only the person who espouses it and draws merely a smirk from the rest of us. But almost all public policy is based on claptrap, too – which invariably makes life less pleasant for us all.

“Oh, it’s crazy here in Ireland,” a friend explained. “The last bubble was a supply bubble. This is a demand bubble.”

Our friend follows real estate trends. He is also a landlord, investing in properties that he rents out.

“I run an ad for an apartment to rent, and I have dozens of people contacting me. And now, they’re offering to pay more than I’m asking.

“We have so many people coming to Ireland to work in the high-tech industries – you know, Google, Facebook, and companies like that, many of whom have based their European headquarters here.

“The builders can’t keep up with demand. The average house in Dublin is now selling for more than $600,000. And, of course, there are so many restrictions on building, it’s not easy to get a permit.”

This phenomenon – a boom in demand and a bottleneck in supply – has led to what the papers are calling a “housing crisis.” The private sector has its seasons of boom and bust. But if you want a real disaster, you need to bring in the feds.

“Eviction banned for long-term renters,” said the headline in the Irish Independent newspaper on Saturday morning. “New laws to prevent landlords from evicting long-term tenants without a clear reason…” begins the article.

Later that day, while we were working on our roof, Dubliners took to the streets; the masses were afoot… and getting up to mischief.

“Housing is a human right,” said the signs. Sinn Fein, the nationalist/socialist political party, has proposed that the “right to housing be enshrined in the [Irish] Constitution.”

The idea of a “right” to housing reveals the faulty plumbing of a leaky mind. In order for someone to have a right to a house, someone else would have a duty to provide it.

Who is this other person, who must be chained to his hammer and trowel so that the soft hands of a Dublin social activist can enjoy the warmth of a nice abode without paying for it?

Yes, that is the meaning of a “right” – it is something you don’t have to bargain for.

There are win-win rights… such as the rights to life, liberty, and property – things we can all enjoy.

And there are fake, win-lose rights, such as the right to a new Tesla. You may get a new car, but someone has to pay for it. Likewise, somebody has to get up on the roof or you’re not going to have a house.

Readers may be curious, as we were. How come Ireland has a housing crisis? Have they no plumbers, no electricians, no carpenters? Have they no stone, no cement, no lumber? Have they no builders, eager to put up houses to meet consumer demand and make a buck?

Of course, they have all of those things – thousands of them. Why, then, don’t they build enough houses? Where’s the bottleneck?

Zoning? Planning? Building codes? Mortgage industry regulations? Why not bring in the likely culprits and ask them a few questions?

Instead, the shyster politicians swing into action with fake rights and win-lose deals.

And there he is… over on page 30. Eoghan Murphy is Minister for Housing, Planning, and Local Government:

This government is not waiting for the market to solve the problem. The market never has. This is not a government restrained by ideology.

We are in the middle of a massive expansion in social housing provision with 50,000 homes being added to the stock between 2016 and 2021.

Well, that ought to do it. Rent control and public housing!

Editor’s Note: Regular readers know Bill is a self-professed “fuddy duddy” when it comes to investing. Our friend Jeff Clark is a professional trader. And when it comes to making short-term market calls, nobody beats Jeff. Today, Jeff sees trouble ahead for U.S. stocks. Read on to see what the charts are telling us.

Trading off the Volatility Index (VIX) over the past few weeks would have been a profitable strategy. It just might produce profits this week as well.

Earlier this month, we told readers of our Market Minute about the low reading in the VIX, and the record speculative short position in VIX futures contracts as a warning the stock market might be in for a rough period. The S&P 500 peaked shortly thereafter, and tumbled more than 4% in two weeks. Meanwhile, the VIX spiked from below 13 to an intraday high above 22 – a gain of almost 70%.

A few days ago, we took another look at the Volatility Index, and noted it was on the verge of generating a broad stock market buy signal. The S&P 500 rallied 90 points from last Monday’s low to last Thursday’s high as the VIX fell all the way back down to 15.

That’s two solid trading signals from the VIX in about two weeks. And it looks like we’re about to get another one. 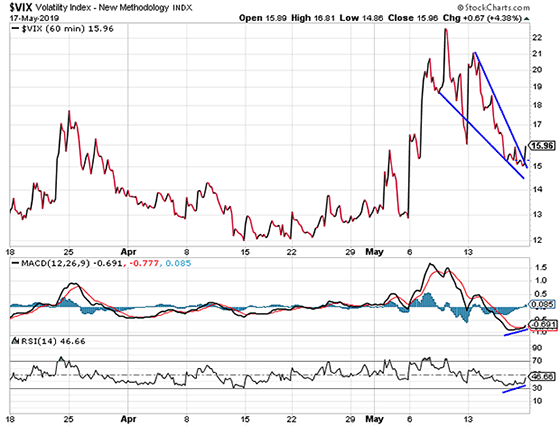 It looks like Friday’s decline in the broad stock market has caused the VIX to break out to the upside of a falling wedge pattern.

Admittedly, this isn’t the cleanest of wedge patterns. It’s a little too steep, and the support line doesn’t connect with all the “dots.” But, since the MACD and RSI momentum indicators both show positive divergence – meaning they’ve been moving higher while the VIX has moved lower – we might want to be a little less strict about the cleanliness of the pattern.

This chart looks to me like it has the potential to press higher again. And a rising VIX is usually accompanied by a falling stock market.

This is a 60-minute chart. And patterns on this timeframe tend to play out within just a few days. So, if the VIX is going to move higher, then we should see that move get started sometime early this week.

Traders might consider taking advantage of any strength in the market early today as a chance to add some short exposure.

P.S. Because you read today’s insight in the Diary, you’re now better prepared for a market crash than the countless investors who didn’t. And I’m glad… because when stocks fall, most investors won’t know what to do.

They’ll panic. So will the mainstream talking heads. But smart traders have the chance to see windfall profits during a market crash… especially if they use my strategy.

In just two days, I’m going to reveal the exact date I believe the market could crash. And I want to show you how you can turn the next crash into a goldmine.

Tune in this Wednesday, at 8 p.m. ET, while I reveal all the details. Reserve your seat now.

Trump’s War on Huawei
President Trump’s trade war is alive and well. The latest target of POTUS’ ire: Chinese tech company Huawei. The president is threatening to choke off access to key U.S. providers. And one of the biggest of Big Techs is already making a move…

America’s War for Tech Dominance
Why is Donald Trump going after Huawei in the first place? Jeff Brown, Bill’s go-to technology expert, has some ideas. America and China are at war. But it’s not the trade war. It’s something else entirely…

Imagine That the Stock Market Is a Game Show…
You’ll never go broke taking profits. That’s what the old-timers on Wall Street will tell you. And as this master trader sees it, when it comes to investing, you take the money… and ignore what’s behind curtain number two.

In today’s mailbag, dear readers weigh in on “The Only Real Way to ‘Fix’ Capitalism”…

I like your analogies of capitalism, especially in noting it is generally morally indifferent. I note that our government today has positioned itself as the moral center of society. Here in America, that is not to be the case, as specified in the federal as well as state Constitutions. It justifies control of capitalism through the monetary and tax systems. Our politicians decide what production is okay or moral, as if they, in the most corrupt of all human positions, are somehow better qualified to decide these issues. This from both the position of what’s necessary for national security and what’s best for the entire society…

Of course, this allows the people of a society to give up morality. As long as you can do it and not be prosecuted by government, it’s okay. This only makes government your god, something our founders fought a war to prevent, and won… only to have it lost in another war 85 years later.

One thing you failed to mention in the subject article is the exorbitant, highway robbery (Congress allowable) interest rates banks are charging on their credit cards. Fortunately, we carry zero credit-card debt, but for those that do… As Gomer Pyle used to say, “Shame, shame, shame” (on you banks)!

Investors will panic. So will the mainstream talking heads. But smart traders have the chance to see windfall profits during a market crash… especially if they use his strategy.

And this Wednesday, at 8 p.m. ET, he’s revealing all the details. This could be your chance to turn the next crash into a goldmine. 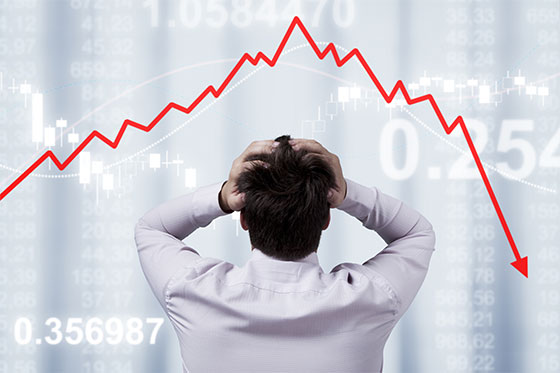