BALTIMORE – We spent a delightful, long Thanksgiving weekend in the country, entertaining children and grandchildren. Not once did we open our laptop computer or look at the headlines.

But now, it is another workweek, and we’re back on the job. As usual, we are looking at dots… and wondering how they got to be so goofy.

This morning, for example, brings a particularly moronic news item from CNBC. The report tells us that the Dow has another 2,000 points left to drop before recovering:

More than half of the members of the CNBC Global CFO Council think the Dow Jones Industrial Average will fall below 23,000 – roughly 2,000 points from its current level – before the stock market barometer is ever able to top the 27,000 level. The 23,000 level would equate to another 8 percent in decline among the Dow group of stocks before the selling stops.

But hey… why stop there?

We’re watching for 4% like one of Custer’s scouts looking out for the Sioux. When it shows up, a lot of investors are going to get scalped.

Of course, we’ve proven that WE can’t predict stock prices. But that doesn’t mean we shouldn’t look for tracks on the ground and dust clouds on the horizon… and try to learn what they mean.

Because while this is a market that can put up with a lot of preposterous dots, it can’t survive 4%.

The whole world economy – in which the 10-year U.S. Treasury is a benchmark – has adapted to 2%. Two additional percentage points doesn’t sound like much… But on $230 trillion of debt, that’s more than $4 trillion in additional interest payments.

The more the world borrows, the higher rates go… and the harder it is to keep up. And guess what? The biggest borrower on the planet has just doubled its demand for credit. Now, the U.S. federal government has lost control of its deficits, pushing up interest rates all over the world.

And it gets worse… because neither Congress nor the president seem to have any idea of what is coming or what to do about it.

First, President T says that he thinks the Fed should reverse course now, even before the crisis arrives:

I’d like to see the Fed with a lower interest rate. I think the rate’s too high. I think we have much more of a Fed problem than we have a problem with anyone else.

Well, yeah… it’s a monetary problem. And the Fed is to blame.

The U.S. dollar is fake money. And the Fed lends it out at fake rates. That’s always going to cause trouble.

But the problem is the Fed’s Mistake #1 (leaving rates too low for too long), not its Mistake #2 (trying to correct its error by “normalizing” them after 10 years of emergency low rates).

Even now, two years after beginning its “tightening” program, the Fed’s key rate is still below the level of consumer price inflation – meaning, the Fed is still lending at less than zero percent of “real” interest…

This is why corporate, consumer, and government debt is so high… and is going higher.

But at least the president is taking the problem seriously. In a Washington Post article from yesterday, we see him struggling with the contradictions of a looney fiscal policy, as well as a BS monetary policy.

That is, the president seems to think the feds can reduce the deficit, but without reducing spending or raising taxes:

President Trump is demanding top advisers craft a plan to reduce the country’s ballooning budget deficits, but the president has flummoxed his own aides by repeatedly seeking new spending while ruling out measures needed to address the country’s unbalanced budget.

Trump’s deficit-reduction directive came last month, after the White House reported a large increase in the deficit for the previous 12 months. The announcement unnerved Republicans and investors, helping fuel a big sell-off in the stock market. Two days after the deficit report, Trump floated a surprise demand to his Cabinet secretaries, asking them to identify steep cuts in their agencies. […]

But even as he has demanded deficit reduction, Trump has handcuffed his advisers with limits on what measures could be taken. And almost immediately after demanding the cuts from his Cabinet secretaries, Trump suggested that some areas – particularly the military – would be largely spared.

The president has said no changes can be made to Medicare and Social Security, two of the government’s most expensive entitlements, as he has promised that the popular programs will remain untouched.

We don’t need the CFO Council to figure out how this will end up.

Real rates will rise no matter what the Fed does. The 10-year yield will hit 4%. And the stock market will crash… far below Dow 22,000.

As Bill wrote above, rising interest rates pose a threat to corporate America’s mountain of debt. For today’s Market Insight, we look at how the quality of corporate debt is deteriorating, making it even more vulnerable to rising rates.

Traditional corporate loans include robust covenants in the contracts to protect lenders from loss by legally requiring the borrowers to uphold certain standards. Common covenants are things like debt-service requirements and limits on total debt, which ensure that borrowing entities maintain reasonable levels of credit quality.

In other words, corporate loans with covenants help ensure that companies will be able to honor their debts in the future.

Covenant-lite loans, on the other hand, are issued with few restrictions on the borrowers. These loans carry more risk than traditional corporate loans.

Today’s chart maps covenant-lite loans as a percentage of U.S. corporate loan issuance going back to 2007. 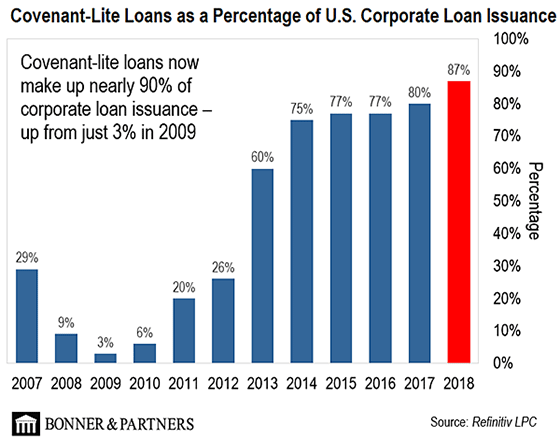 The explosion of covenant-lite loans is a major warning sign that credit quality is deteriorating. Combine this with the effect of rising rates, and you have a formula for crisis, as shaky corporate borrowers have become dependent on cheap credit.

In fact, hedge fund manager Howard Marks – who warned his clients of the pending crisis in a February 2007 memo – just put out another memo warning of the cracks forming in the credit markets.

Specifically, he told clients that BB-rated junk bonds are now being issued with looser covenants than traditional investment-grade bonds.

…the possible effects of economic overstimulation, increasing inflation, contractionary monetary policy, rising interest rates, rising corporate debt service burdens, soaring government deficits, and escalating trade disputes do create uncertainty… Thus, the best we can do is turn cautious when the situation becomes precarious. We never know for sure when – or even whether – “precarious” is going to turn to “collapse.”

Should You Track Your Net Worth?
How much are you worth? Surprisingly, most Americans don’t have an answer to that question. But once you’ve decided that you want to know your net worth, here’s how to go about finding it…

Goldman: Expect Commodities to Soar in 2019
It’s been a rough year for commodities. Oil and several metals are now below important technical “support” lines. But Goldman Sachs sees brighter days ahead for commodities…

How the Trade War Kickstarts This Forgotten Industry
The trade war may ultimately be a drag on long-term growth. But in one corner of the market, it’s setting up a rebound for a long-forgotten industry.

I agree that a bear market is imminent, but not until late 2019 or 2020. In the meantime, I view the market currently is in correction mode. While it slips downward almost daily, I have been selectively buying some very attractive stocks this quarter. Yes, I have a sizable amount of gold and silver stashed away, along with enough cash. Don’t rush the bear, make more money waiting for the bear to arrive (which is probably more than a year away)!

An absolutely excellent piece of writing. As I am now in my sixties and seeing friends depart, the very central point of your article weighs heavily. That said, congratulations on the christening, and thank you for causing me to stop and think.

Are you attending this free event?

On Wednesday, Bill will be sitting down with two other legends in the financial publishing business: Doug Casey and Mark Ford. These men will have a candid conversation on life, business, and their newest projects. Reserve your spot here… 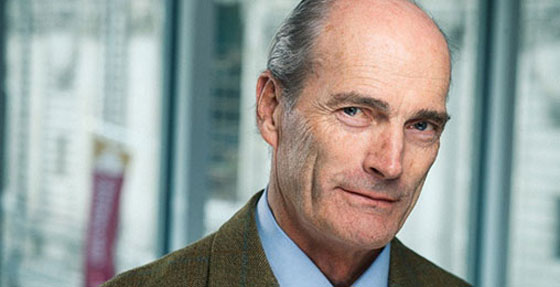