YOUGHAL, IRELAND – Nothing much to report from the markets…

So we gird our loins, put on our armor, and go into battle.

Our guess yesterday was that power really does corrupt. And when you have too much of it – a near monopoly on power – you give yourself permission to do things you otherwise wouldn’t do. Because you know you can get away with it.

What prompted this line of thought may have been the news… or indigestion. As for the news, here is Jeremy Scahill, editor of The Intercept:

Israel has once again conducted a premeditated, full-scale massacre in broad daylight, in front of the cameras of the world. Once again, it took place in Gaza.

On May 14, Israeli snipers and other forces gunned down more than 60 Palestinians, and wounded thousands of others, including civilians, journalists, and paramedics.

Among those killed by Israeli forces was an 8-month-old infant. Her name was Laila al-Ghandour. They also killed at least seven other children and a man in a wheelchair, and that man had lost his legs after they had to be amputated following an earlier Israeli attack.

Here at the Diary, we try to connect the dots. There are the bare “facts,” which are squirrelly enough. And there are the ideas, myths, and delusions surrounding them.

These latter dots, like ball bearings on a sidewalk, are the ones that cause the broken bones.

People think they know, for example, not only what happened, but why it happened. They think they can look into black hearts and see corrupted souls – even from thousands of miles away.

They think they know who the real bad guys are. In the case at hand…

The Palestinians were fiends from Hell, said one Diary reader:

When faced with a screaming horde of fanatics who want to exterminate your existence, do what it takes. Be glad that Mexico is not dominated by Islamists.

They had blood dripping from their hands, said another:

A significant number of Palestinians killed were unquestionably identified by independent sources as terrorists.

They were mass murderers, said a third:

They intend to kill indiscriminately and create a fifth column within Israel to destroy it.

In other words, “Bad Guy” Theory says they all deserved to die. They – not the Israeli gunmen who shot them down – were the evil ones.

No charges were ever filed. No evidence presented. No verdict rendered. And no sentence pronounced. But they got the firing squad anyway.

That’s the advantage of power. You don’t need to hold a trial. And you never need to say you’re sorry. Because, you’re never the bad guy.

Some readers are okay with this. Others are appalled. But look beyond the bare facts. You can see anything you want.

So let’s leave the Holy Land and turn to the question sitting close by, riding shotgun: What about Americans? What does “Bad Guy” Theory tell us about them?

Saints in the Mirror

Dear readers will look again beyond the bare facts and into their hearts and minds. Americans will see saints in the mirror and angels dancing on the White House lawn. Foreigners will probably see something else. But what about the accusing dots?

We could look at the bloody conquest of the Philippines at the dawn of the 20th century, for example.

U.S. troops took over the Philippines after a fake battle with Spanish forces (the two armies agreed to a mock battle in Manila to justify the handover to Americans rather than to the natives).

“Hooray,” said the Filipinos. “America is a beacon of independence. Now we will be independent, too.”

America would have its day in the imperial sun. But it was still only early morning and it was already drinking heavily from the cup; power was going to its head.

Instead of handing over the Philippines to the Filipinos, the Americans chose to hold onto their colonial prize.

Alas, the ungrateful inhabitants resisted. As many as 1.5 million of them died – mostly civilians – from fighting, massacres, concentration camps, and disease.

American soldiers told the tale in their letters home. One wrote to his kin in New York:

The town of Titatia was surrendered to us a few days ago, and two companies occupy the same. Last night, one of our boys was found shot and his stomach cut open. Immediately orders were received from General Wheaton to burn the town and kill every native in sight; which was done to a finish. About 1,000 men, women, and children were reported killed. I am probably growing hard-hearted, for I am in my glory when I can sight my gun on some dark skin and pull the trigger.

Back home, Americans had little doubt who the bad guys were; the natives were “terrorists”… They were “savages”… The devils were caught up in some unholy cause.

But a few had second thoughts. In his diary, Mark Twain referred to American soldiers as “our uniformed assassins.” He described the war as:

…a long and happy picnic with nothing to do but sit in comfort and fire the Golden Rule into those people down there and imagine letters to write home to the admiring families, and pile glory upon glory.

Who were the bad guys then? We flip ahead to preview the answer: maybe nobody.

People are neither always good nor always bad… but always subject to influence. “Bad Guy” Theory may not help.

That’s the story today as we map the iShares MSCI Emerging Markets ETF (EEM) – which tracks a basket of 857 emerging market stocks – from January 2017 through today. 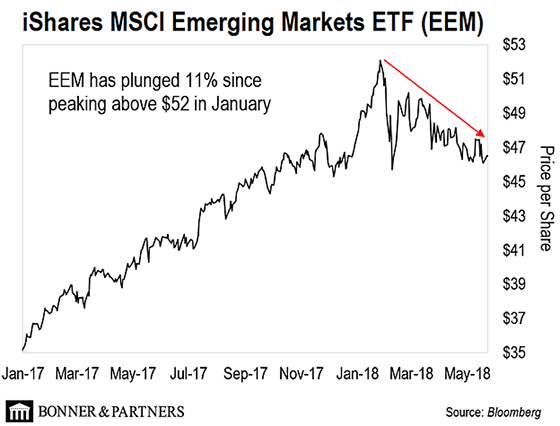 As you can see, emerging market stocks blasted higher in 2017… but they have plunged 11% since their peak in January of this year. For comparison, the S&P 500 has only fallen 5% from its all-time high in January.

There is never a simple explanation for why stocks go down… but in this case, we can point to the U.S./China trade war fiasco as one of the primary factors.

At writing, Chinese stocks, as measured by the MSCI China ETF, are down 10% from their January peak.

How to Know If You’re Rich
Just how much do you need to be “rich”? In the world of the hyper-wealthy, private banking now has an answer: $25 million.

Maybe Algorithms Aren’t That Smart After All…
In countries like China, algorithms are used to determine creditworthiness. Some say it will make credit available to more people. But new research shows that the algos have been making some very human mistakes…

How to Bulletproof Your Portfolio
Stocks appear to be recovering from the volatile days of February. But some investors are still worried about trouble ahead. Chris Mayer, one of Bill’s top analysts, shares a few steps to bulletproof your portfolio for the volatility yet to come.

As Bill mentioned above, some readers have strong opinions about the events unfolding in Israel…

If you have “no dog in the fight,” then stay out of it. Your statement regarding the deaths “only” of Palestinians is just false. I’m sure you know it. A significant number of Palestinians killed were unquestionably identified by independent sources as terrorists. Unequivocally. I also saw direct footage of the Palestinians initiating the attack with grenades and bombs.

There was ridiculous chanting and chaos as they were storming Israel’s borders and throwing these explosives across the line. Footage. Real people. Palestinian terrorists. Are you getting it?! Do your research or stay quiet. Up until now, I enjoyed your newsletter, but I’m now inclined to think that I’ve more than likely been bamboozled before and was just too naïve to know. Thanks for revealing yourself.

You do indeed have a dog in this Middle East fight, as Israel has dictated U.S. foreign policy for decades.

Bill, you disappointed me for the first time with your normally wise insights into the foibles of the world. The “Palestinian” demonstration was an organized self-immolation orchestrated by Hamas and its Iranian masters. See the op-ed in today’s Wall Street Journal by Ronen Manelis of the Israeli Defense Forces. Could his writing be self-serving and justifying? I’m sure it is somewhat slanted to his nation’s interests. When faced with a screaming horde of fanatics who want to exterminate your existence, do what it takes. Be glad that Mexico is not dominated by Islamists.

“Israeli soldiers shot people who couldn’t shoot back.” Ha! Bill, this is not some peaceful “demonstration.” This is a large group of protesters, likely military, who concluded that if they all breach the Israeli border en masse, that they can’t all be shot because naïve people like you will shout out in protest. Their assumption is incorrect; a nation’s sovereign borders cannot be overrun at will. Every nation has the right to defend itself. In this case, these breachers are not coming over the border merely to preach peace on Earth and goodwill towards men. They intend to kill indiscriminately and create a fifth column within Israel to destroy it.

I value and respect your analysis. Your recent essay regarding the Gaza/Israel border is probably the result of your being grossly misinformed. You have fallen for the egesta that passes for reporting, hook, line, and sinker. Your characteristic skepticism is misplaced. It should be directed at the media.

Some, such as HuffPost, are even using this as another excuse to attack Trump. The Gaza riots are not peaceful or spontaneous. They are carefully orchestrated by Hamas. Iran pays $100 to every protester, and $3,000 to the family of every fatality. Terrorist cells are strategically placed throughout the protesters.

I’m not sure how to respond to the Diary I read, but this might work, so here it goes. Is America the bad guy or the lesser of the evils? I love reading your controversial posts. This one, however, is tough for me to sit on. Despite everything you said having more than a measure of truth in it, I do not believe you yet appreciate a world under American domination. I believe that this is the natural correction of evil that you speak of.

We’re living in it. The “gods” may not be fully pleased, but they can tolerate a world under American domination. Imagine a world dominated by Iran, Russia, or Palestine. Do you for one moment believe the world would be a better place then? No, Mr. Bonner, that’s a scary world, and I hope the gods are not yet ready for such a world. (Who are we to speak on behalf of the gods?)

Meanwhile, other readers believe Bill is just “telling it like it is”…

Excellent article! You know exactly what the rest of the world is thinking about Israelis and Americans.

A significant problem today is that the media provides just enough information for the average person to be uninformed while thinking they know the whole story. I try not to draw conclusions from the limited and often biased information that I read in the media, both liberal and conservative.

Thank you, Bill. Please keep telling it as it is.

That was excellent. I hope everyone in D.C. – and all the news outlets – reads it, even though no one will have the stomach to make any changes or even begin civil discussions.

If you’re easily offended, do NOT buy this book…

Doug gives his unfiltered view on everything from genderless babies… last year’s NFL protests… and even President Trump. This book will likely offend some readers. But if you’d like to get your own copy, you can go right here. 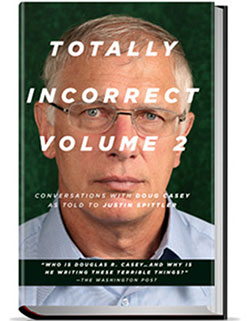