We tried to make the story interesting.

“We were in a market in Riyadh, and when I reached for a kumquat to see if it was ripe, the owner cut my hand off.

“‘Allahu Akbar!’ he yelled. ‘That is how we deal with shoplifting here.’

“Looking on the bright side, it was my left hand.

“We rushed to the hospital, but in the excitement, we ran over a street urchin.

“‘Quick, throw him in the back,’ I yelled to Elizabeth. ‘He might come in handy… heh heh.’

“But when we got to the hospital, we found he was already missing his left hand.

“‘Must have gone shopping at the same stall,’ Elizabeth noted.

“Fortunately, the Saudis had just executed someone with a good left hand… which he had demonstrated by strangling his wife with it.”

I held up my hand to show our friend. “This is a hand-me-down from him.” 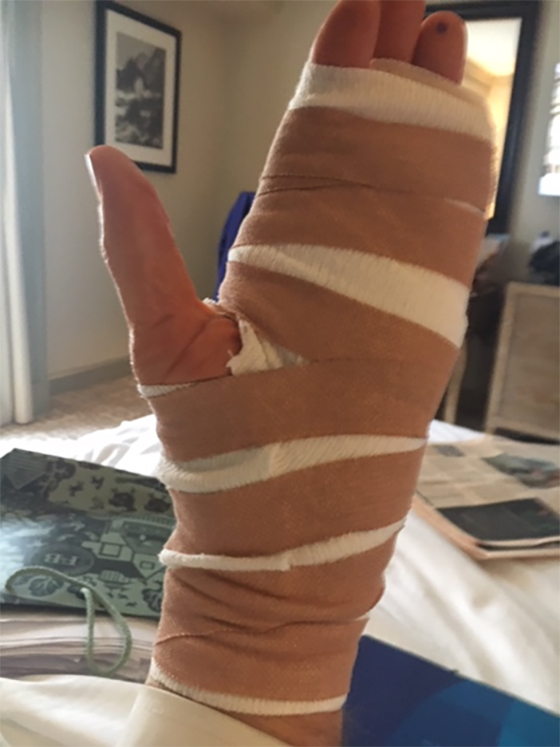 “Stay away from me with that thing,” said Elizabeth.

“Seriously,” our friend did not seem amused, “DIY accident?”

Now back on the job, we are handicapped. Crippled.

Typing is tough, so we’ll keep it short!

What goes around and comes around.

Specifically, on Monday, we were looking at how the “Inflate-or-Die” trap has moved from Germany to Zimbabwe to Venezuela… with many stops along the way… and where it will show up next.

“Almost everywhere” is our guess. All the world’s major economies are now trying to inflate their economies with fake money.

“Everybody’s doing it,” says the U.S. president. And since everyone is doing it – lower rates, quantitative easing, deficits, etc. – everyone HAS to do it to keep up.

Mr. Trump wants the U.S. to do more of it (more on that tomorrow). Which puts the whole world in an Inflate-or-Die trap.

Nobody wants his currency to go up – unless he’s on a vacation abroad, or shopping for investment bargains.

Nobody wants his economy to go down, either – which is why you can count on more stimulus. Barron’s:

The U.K. pound recently hit a 34-year low against the dollar… which means, if you have a long-term outlook, it’s time to go shopping in the U.K. market.

If you believe the pound might rebound at some point, then pound-denominated assets are on sale. You could get quite a lift just from the currency.

Of course, I’m not the only one thinking along these lines…

Hong Kong’s richest family just bought a 220-year-old U.K. pub and beer company, Greene King, for 2.7 billion pounds. This was a price 50% above the stock market price at the time.

It didn’t surprise me that a family made that deal. Families don’t worry about playing quarterly earnings games. They can think long-term, beyond current troubles. (Perhaps they also want to get out of Hong Kong!)

This is partly why, according to a variety of research, family-owned firms outperform in the stock market.

Getting back to the U.K., many people overlook that U.K.-based companies are international in focus. About 70% of the earnings of companies in the FTSE 100 [an index of the 100 companies listed on the London Stock Exchange] come from outside the U.K. Even if you think Brexit could hurt the U.K. economy, U.K.-based companies could still do very well…

We recently picked up a U.K.-based company that does most of its business outside of the U.K. It is set to generate more than half its market cap in cash over the next five years.

Another big currency market accident this year was in Argentina, where an election just knocked both the peso and the stock market for a loop.

We’re going down in a week or so to gawk. But tomorrow we take a peek at what we’re getting into.

In preview: That country, too, is in an Inflate-or-Die trap. The pro-business president, Mauricio Macri, tried to resist inflating. He died.