POITOU, FRANCE – The U.S. economy… all $20 trillion of it… explained in a single tweet (any similarity between this and one you might get from the president of the United States of America is pure coincidence):

The tax cuts ARE WORKING! The trade war, too! And those who say otherwise are just jealous SOBs!

In reality TV – and performance art of the wraslin’ genre – you add dramatic tension by creating simplified, cartoon personalities and then allowing them to get into snits with one another. The audience tunes in to find out how the spats will be resolved.

In professional wrestling, it is pretty straightforward.

One of the wraslers insults or challenges another one. Wives and girlfriends are brought onstage to stir up animal passions. There’s some pushing and shoving in the dressing room – caught by security cameras! And then, the stage is set for a resolution in the ring.

A tweet is not long enough to elaborate on a policy, an idea, or a complete thought. But it is great for this kind of feud-building.

President Trump uses tweets effectively. For example, he tweeted that the lawful head of North Korea was a “bad dude,” a “maniac,” and a “rocket man.”

Gauntlets were thrown down… leading to a rumble in the jungle – in Singapore – where the U.S. president said he would be “honored” to meet with Kim Jong-un.

Upon completion of the meeting, the U.S. president announced victory and declared that North Korea was “no longer a nuclear threat.”

The celebrity feud is part of the entertainment world’s advertising strategy.

In both politics and entertainment, the feuders appear to be going at one another with hammers and tongs. But they are really on the same team.

In the entertainment world, ratings and name recognition for both sides generally go up.

And in the political world, though elections give the win to only one of the contenders, they are all playing the same game.

The political system transfers money and power from the public to politicians, their handlers, their cronies, and their zombie clients.

Various moving coalitions of these people fight over who gets what… But they all favor big, ambitious government… with themselves at the head.

The celebrity feud has proven very effective as a political tool, too, because it offers voters a shortcut.

Complex subjects are reduced to simple popularity contests. Trump or Hillary? Choose your champion; no need to think about it any further.

All of which makes us look forward to the coming tweet feud between The Donald and Fed chair Jerome Powell.

The president already set it up when he said, during an interview with Reuters earlier this month, that he was “not thrilled” by rising interest rates. When the crash/recession arrives, the complex issues will be simplified into a personality battle.

The president will accuse Powell of destroying his beautiful economy. Powell may have no idea what game the president is playing. He will respond with well-reasoned arguments… and ultimately cave in when the going gets tough.

Perhaps the pressure’s already getting to him. Powell’s remarks in Jackson Hole last Friday were interpreted by some as being “dovish.” Powell says, “…there does not seem to be an elevated risk of overheating,” signaling that interest rate hikes might be put on hold.

Wall Street knew what to do: buy. The S&P hit an all-time high. [More in today’s Market Insight below.]

But the real clash is still in the future… perhaps a year or more out. So let’s just look a bit beyond the tweets… at why it’s just a matter of time before the showdown occurs.

To that end, we have the latest numbers on the tax cut.

Proponents, led by Mr. Trump, claimed it would add growth and jobs, and inflate incomes. Critics – including your editor – claimed it was a cheap trick that would merely increase the deficit (thereby shifting the burden of paying for government onto a future, unknown, unborn, and unaware public).

The final results won’t be in for a while, and even then, they will be subject to much dispute. But the initial figures may be fun to look at.

In order for the tax cut to “work,” it had to generate enough extra GDP (jobs, incomes, tax receipts) to pay for itself. That was the promise. But tax cuts – like debt, invasions of Russia, and bad marriages – are easy to get into and hard to get out of.

Most often, you wish you had never gone in.

First, personal incomes have, so far, not gone up. They’ve gone down. From Bloomberg:

Once the impact of inflation is included, ordinary Americans’ hourly earnings are lower than they were a year ago.

That hasn’t happened. And though Trump regularly boasts of the economy’s performance, many Americans don’t feel they’re sharing in the gains – a risk for Republicans as they seek to defend their House and Senate majorities in November elections.

A majority of voters believes their personal financial situation has remained the same or gotten worse over the past two years, said Tim Malloy, assistant director of the Quinnipiac University poll.

How about the “paying for itself” claim?

The feds take about 16.5% of GDP in taxes. That means that for every $6 the economy produces, $1 goes to the government. But that works in reverse as well. For every $1 the government loses in tax revenue because of the cut, the economy must produce an additional $6 just to keep tax receipts steady.

Otherwise, tax receipts would fall and the debt would rise; we would be spending our children and grandchildren’s as-yet-unearned money, in other words.

From the get-go, that seemed a very unlikely bet. And now we see, in the latest quarter, tax receipts fell by almost exactly the amount of the tax cut – 6%. There was no apparent offset from a growing economy; the tax cut did not even make a down payment on paying for itself.

As predicted, too, the deficits and debt continued to grow. June accounts showed a $75 billion deficit, with $607 billion year-to-date, up 16% from the previous year.

In July, the monthly deficit rose again… to $76.9 billion. Total net government debt has risen $1.3 trillion over the last 12 months.

In short, nothing so far suggests that the economy is ready to dance a new jig. The party’s been going on a long time. The revelers are worn out. The ashtrays are full. The Fed is putting the liquor away. And the police have set up a DUI roadblock down the block.

Pretty soon… someone is going to turn out the lights.

Then, as the drunks stagger to their cars… the stock market crashes and the economy comes tumbling down…

And even before the sun rises… or the markets open… Mr. Powell will find himself the target of an early morning tweetstorm.

Fed chair Jerome Powell’s speech at Jackson Hole seems to be the catalyst that sent stocks higher. The market interpreted his speech as “dovish” – in favor of keeping interest rates lower for longer. Thus, investors saw it as a bullish signal.

In Venezuela, Bring Your “Fatherland Card” Before Filling Up the Tank
As Bill showed recently, thanks to incredible government subsidies, gasoline in Venezuela is basically free. But in order to take advantage of low prices at the pumps, Venezuelans will have to sign up for a “fatherland card.” But “Big Brother card” might be a better name for it. The message is clear: Get in line behind the government, or suffer…

How Trump Legalizes American Cannabis
In the next few weeks, a particular strain of cannabis could be made legal in the United States. But we’re not talking about pot. Casey Research’s Nick Giambruno shows how one of America’s favorite cash crops steps out of the shadows.

What Does a Musk-less Tesla Look Like?
Earlier this month, Tesla CEO Elon Musk tweeted his intention to take the Silicon Valley carmaker private. Now, Musk says the plan has been called off. The abrupt U-turn has left the company drowning in lawsuits and federal investigations… and jeopardizes Musk’s once-unassailable position at the helm.

In the mailbag, readers have more to say about Trump, “Stool Pigeons,” and the legacy of John McCain…

If they can’t get President Trump to quit because of all the false stuff they put on the national news, then they should go for the throat and try to tear him down by attacking him personally! But the Lord is on his side. I don’t think they’ll win there. The next threat could be assassination; but I don’t think they’ll win there, either. Mueller goes where he doesn’t belong; he got people that were wrong, but I’m just waiting to see who’s going to get him. He doesn’t have a good past!

Trump has lied over and over. He has always left his people hanging, and never does the right thing for anyone but himself. He is his own stool pigeon. And all at the cost of the American people. He wants to pass laws that will help him; he doesn’t give a rat’s ass about anyone else.

He’s our president, and we, the people, are glad he wasn’t invited to McCain’s funeral because he would not have gone anyway. So what’s your point? He was a treasonous traitor and a backstabber. You’re lucky our president didn’t say what’s on many of our minds about that RINO!

You might try asking if the other people incarcerated with McCain thought of him as a “war hero.”

I think you sized up John McCain pretty well. But there’s more to the story. Trump isn’t going to lose any sleep over the lack of an invite to McCain’s funeral. I wouldn’t, either. McCain was a genuine war hero, and I admire him for enduring five and a half years of torture, isolation, and pure hell at the Hanoi Hilton. That’s as far as my admiration goes.

He returned from Vietnam to find that his wife, a former model, was disfigured in a terrible car accident, and proceeded to cheat on her in numerous adulterous affairs until meeting a beautiful former cheerleader named Cindy, 17 years his junior. McCain’s indiscretions during this period of his life are self-described as his “greatest moral failure” for good reason.

History may push these sordid facts into the shadows of his life. I’ll remember that McCain reveled in the power of the U.S. Senate, and often used its pulpit to denigrate his fellow Republicans.

Such a “maverick” was he that the liberals praised him with many accolades… until he ran for president against Barack Obama in 2008, and the left showed its true colors. McCain realized too late that he was just a snake charmer. The tail that had been waving at him from across the aisle turned out to be a viper’s head full of fangs and venom.

I appreciate your service very much. It is refreshing to hear facts about the financial world without the constraints of advertisers and political hacks. I look forward to your continued success; your success could mean my success. Thanks.

The plan would have taken control away from the Federal Reserve, and put money squarely in the control of the people.

The plan never came into effect. And these “Reagan dollars” were forgotten. 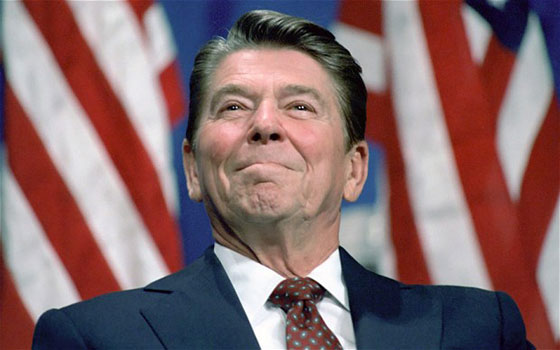