Maria’s Note: Maria Bonaventura here, managing editor of the Diary, with a special two-part edition for you. As our editor mentioned yesterday, he recently sat down with his Bonner-Denning Letter coauthor Dan Denning in Baltimore. And they came up with 13 things you should do before the mother of all crises falls upon us.

You want to take that selfie from the top of the Empire State Building? Or go to a jazz club on Bourbon Street in New Orleans? Or pay homage to the King and visit the Eternal Flame at Graceland? You’d better hurry!

Below you’ll find a short list Bill and I compiled this week while working together from Baltimore. It’s a project we began last year. But it’s taken on new urgency this week with the outbreak of the coronavirus in China…

Chinese officials have quarantined over 50 million people to prevent the spread of the virus from cities in Hebei province, including the city of Wuhan, where the virus originated. There are officially over 6,000 reported cases of infection in China (with cases reported in Australia, India, Thailand, France, and the United States.). The official death toll is at 132.

As global pandemics go, the coronavirus isn’t terribly lethal (not yet). But it appears to be spreading. And that’s got authorities restricting travel to and from China. British Airways recently suspended daily flights from Heathrow to Shanghai and Beijing. United Airlines followed suit shortly thereafter, suspending flights to Beijing, Hong Kong, and Shanghai due to low demand.

Meanwhile, stocks in China haven’t traded since January 23, when they fell 2.8% ahead of the Lunar New Year. Since then, Chinese authorities have extended the stock market “holiday” until Monday, February 3. That’s when exchanges in Shanghai and Shenzhen are scheduled to open again.

It’s entirely possible that a week from now all of this will have blown over. Accordingly, any “panic selling” on pandemic fears is really a buying opportunity…

Over in the U.S., the economy has expanded for a record 43 quarters in a row, according to data from the National Bureau of Economic Research. That makes it the longest expansion (without a recession) in American history.

Buy the dip, you idiot! 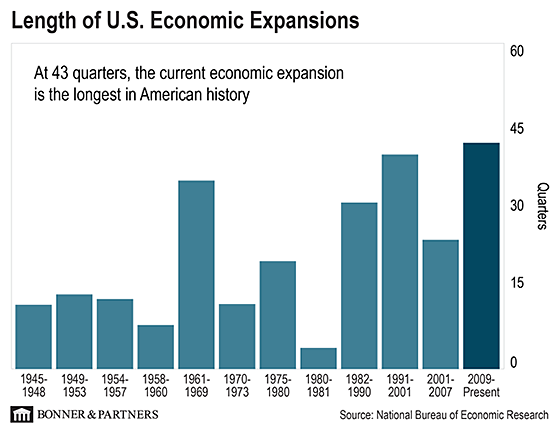 But ever the contrarians, Bill and I got to wondering just how much of world trade, financial activity, and even your daily life could be interrupted by a pandemic. And it doesn’t even have to be a pandemic, although that seems most timely at the moment.

It could be a financial panic (FDR declared bank holidays in the Great Depression to prevent bank runs). It could be terrorism, a natural disaster, an electromagnetic pulse, or what I’ve called Financial Martial Law…

There’s an old saying that civilization is only nine meals away from anarchy. When the trucks stop running and the food doesn’t hit the supermarket shelves, it will take about 72 hours before people go from hungry to desperate. The physical flow of goods will slow and stop. And then financial flows will stop, too.

Accordingly, I’ll kick off our list with three money-centric things to do. These come from Bill. And the main point is that financial independence is your best defense against any kind of emergency.

At a base level, that means having money, or whatever people might use as money, on hand when you need it. Bill advises you to:

Readers of The Bonner-Denning Letter will know that we advise you to always have enough cash safely stored at home to pay for six months of expenses. This assumes the ATMs go dark, the banks are closed, and you can’t get at whatever money is in the bank.

Our baseline assumption here is that if you don’t physically possess it, it’s no good in an emergency.

But please! We’re not advising you to take all your money out of the bank. And in a true emergency – or a prolonged one – cash itself might cease to be useful after a while. This is why we’ve written three reports for new Bonner-Denning Letter readers on what you can do to protect yourself.

If you’re a paid-up reader of our Letter, you can access them through these links: Five Straightforward Ways to Protect Your Cash, When the ATMs Go Dark, and The Crisis Money Guide. (If you’re not a subscriber yet but want to know how you can get immediate access to our full library of reports, go right here.)

Those are practical precautions for any kind of emergency. But they’re not the only things you can do before a crisis hits. Tomorrow, in a special Sunday edition, I’ll give you my top 10 things to do if we’re in what our old friend Jim Kunstler calls a “long emergency.”

P.S. If you don’t know, our mission at The Bonner-Denning Letter is to protect your wealth from “the big loss.” We look for the big trends coming our way and put you on the right side of history. And right now, we’re seeing a disturbing development taking place.

Call it socialism. Call it Financial Martial Law. Call it the death of win-win capitalism. It’s all the same. And it’s coming faster than you think. Full story here.

P.P.S. Tom Dyson is here in Baltimore with Bill and me at the moment. It goes without saying that converting some of your financial wealth into physical metal is at the top of our list for financial prepping. If you’ve been reading the Diary – or Tom’s Postcards From the Fringe – you’ll know Tom has done the radical version of that, selling all his stocks and converting it into gold.

Tom believes that’s the best way to get you, your money, and your family to the other side of any crisis. You can hold the gold or trade it for goods and services. Eventually, having preserved your purchasing power, you can use it to buy up cheap stocks or real estate when the crisis dies. It ALWAYS does.

But it could be awhile. And it’s likely to get worse before it gets better, even if it’s not the coronavirus that causes it.