It is more proper that law should govern than any one of the citizens.

PORTLAW, IRELAND – Yesterday, we took a look at what was happening in Argentina.

A shorthand version: Argentina seems like it is on the way up… President Mauricio Macri really is draining the swamp – or is trying to.

But after 70 years of Peronism, there is a lot of swamp to drain. And the slithery creatures don’t like to see the juice dry up.

Meanwhile, the media yesterday reported on rising water in Washington.

Among the news items was one about an old friend, Chris Ruddy. He is reportedly considering an investment offer of $90 million in his publishing business, Newsmax.

Chris is a Trump ally. The media speculates that the money is coming in from the government of Qatar for the purpose of gaining access to, or finding favor with, the U.S. president.

But this sort of thing does happen…

For instance, CNN tells us that Trump’s personal lawyer has been selling his connection to the White House as if he were a shyster on late night TV:

Michael Cohen served loyally as Donald Trump’s right-hand man for more than a decade, taking care of anything and everything the New York real estate baron needed to get done.

On November 8, 2016, Cohen’s stock suddenly soared: He was now the personal attorney to the President-elect of the United States, with unique understanding of a man that everyone was scrambling to get access to.

Cohen quickly got to work. According to multiple people familiar with Cohen’s conduct following the election, he aggressively pitched himself to potential clients, reminding them of his proximity to the most powerful man in the world. Those efforts landed Cohen lucrative consulting deals. New reporting this week revealed that in the months following the 2016 election, Cohen received hundreds of thousands of dollars from powerful entities based in and outside of the United States.

We only bring it up to illustrate how the swamp works: If you need things fixed, you go to a fixer.

If you have a real government of laws, and not of men, no one bothers to buy “access” to the president or the ruling party – because access doesn’t get you anywhere.

Since the 16th century, Justicia – or Lady Justice – is depicted as blindfolded. She deals out justice impartially; she doesn’t care whether you have access or not. Justice is meant to be applied equally, regardless of wealth, power, or status.

But when the swamp takes over, the blindfold is the first thing to go. That’s when it pays to make connections.

We’ve reported previously that lobbying expenses are among the best investments a company can make. Campaign contributions, too, are good ways to get ahead in the swamp. We’ve already illustrated this here.

But you’ve got to bet on the right horse. In the fall of 2016, most of the swamp money was going to Hillary; most people thought she would win.

So when the ballots were counted, all of a sudden, the swamp critters had to find a way to get to The Donald.

That proved easy to do. The president-elect and his entourage were already very experienced with the wet world.

They’d been on the make in the New York swamp for decades. All they had to do was take the Acela train down to the Okefenokee on the Potomac, where the swamp was bigger, deeper, and even more foul.

Almost immediately following the election, Michael Cohen was on the phone. CNN:

“I don’t know who’s been representing you, but you should fire them all. I’m the guy you should hire. I’m closest to the president. I’m his personal lawyer,” was how one GOP strategist described Cohen’s sales pitch.

And the money rolled in.

This last company was angling for a crony contract from the U.S. Air Force. It turned to Cohen, who has no apparent knowledge of the aircraft industry or federal contract procedure.

His legal experience is limited to the kind of thing you find on billboards – “Injured on the job? Denied disability? Call Michael”… and, of course, controlling the damage from Donald Trump’s misadventures.

Nevertheless, Korea Aerospace Industries turned to him for what it called “short-term legal advice.”

But heck, it’s good work if you can get it.

The papers are reporting a total of about $4.4 million for his firm, Essential Consultants.

That’s the way the swamp works. Put enough complicated laws on the books and what you really have is a government of men who help you get around them.

Having the right connections is… well… essential.

By Jeff Brown, Editor, The Near Future Report

Regular readers of Bill’s Diary will know that I follow developments in the cryptocurrency market very closely.

I’m actually preparing for a blockchain and cryptocurrency conference in New York City as I write this.

But I wanted to take a minute to give you an insight on the developments playing out in the industry.

As you’ll remember, I wrote to you late last year to warn that the crypto rally we were seeing was unsustainable. I said that, while the long-term direction of the market was up, we would “undoubtedly experience some pullbacks along the way.”

And the pullback in the overall crypto market we saw at the start of this year certainly didn’t disappoint.

From a peak of $830 billion in January, the market capitalization for all cryptocurrencies fell to $250 billion in early April, a 70% drop.

There were a few reasons for this. Profit-taking by large hedge funds and regulatory uncertainties around cryptocurrencies and crypto exchanges were two reasons.

Another, maybe surprising, reason was profit-taking leading up to Tax Day. Many were forced to sell off a portion of their digital assets to pay their 2017 cryptocurrency-related tax obligations.

But the good news is that there are still plenty of reasons to be optimistic for the future of the blockchain and digital asset market.

Consider this: We’re only in the fifth month of the year, and the amount of money that’s been raised in initial coin offerings (ICOs) has already exceeded what was raised in the full year of 2017.

Have a look at the chart below. 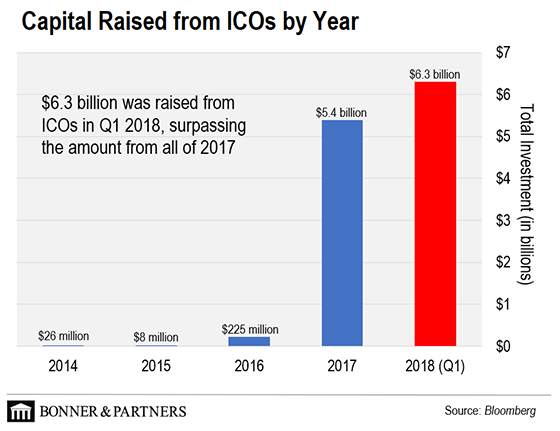 We’re not even halfway through 2018, but capital raised from ICOs has already hit $6.3 billion.

More and more hedge funds are being established on a weekly basis. More investment capital is flowing into the marketplace.

And get this, earlier this month, Goldman Sachs announced that it is establishing a bitcoin trading operation.

You read that right. This will be the first traditional Wall Street bank to take the plunge.

Imagine what will happen when every major investment bank establishes trading operations not just in bitcoin, but in other major digital assets as well.

At writing, the total cryptocurrency market cap stands at $438 billion, a 75% gain from the year-to-date low in April.

I fully expect the total market cap to at least hit $1 trillion before the end of the year.

P.S. Goldman Sachs opening a bitcoin trading operation… hedge funds piling into digital assets… and ICOs raising record amounts of capital… all of these developments tell me one thing: Wide-scale adoption of blockchain technology is imminent.

And if you want to profit from this booming trend, you don’t have to purchase bitcoin. I’ve found ways to profit securely from the cryptocurrency explosion without ever logging on to a crypto exchange. Here’s how.

Cracking the Buffett Code
Legendary investor Warren Buffett has cemented his place in history as one of the best investors of all time. Now, researchers have cracked Buffett’s secret code for success.

Yes… Big Tech Wants to Control You
As Dan Denning has warned in the past, your data is the prize for every big tech company. But to what end? The endgame of acquiring your data can be summed up in one word: control.

Buy Your Home on the Blockchain
If you’ve ever purchased a home, then you know that closing costs are typically in the thousands of dollars. And it can take months to settle all the paperwork. But according to Jeff Brown, Bill’s top technology expert, this process could soon be completed in minutes… and cost pennies on the dollar. Here’s how.

In the mailbag, more talk of myths…

The myth is that there’s more to life than nature generating as many different varieties of life as it can. There’s nothing more. No good or bad. No society. No God. Just nature trying to find some form of life that will survive the next apocalypse – whether it’s an asteroid strike, super volcano, solar storm, magnetic field “flipping,” or whatever. The theory of infinity.

Have you ever read Alasdair MacIntyre’s After Virtue? It is all about myths – a historical view of philosophies and how traditions (myths) are the foundations of everything, and a discussion of which one is best. He was originally an activist Marxist in the UK; but now, after a lifetime of studying myths, he has decided that Aristotelian Thomism is the best myth. You would enjoy it.

When a culture deems the absurd and outrageous as “normal,” said culture is not only decadent, it is one of death. I am appalled that the government goons treated your wife the way they did! Especially knowing that they are like a tenured professor after their probation time is up; they don’t work and cannot be fired. Perhaps the lackey was still on probation and had to put on a good performance. Regardless, the entire hoax should be scuttled. But wait, “they” will be needed for the oligarchy’s army – mindless soldiers armed to the teeth.

And President Trump remains a popular topic of conversation…

If you have a chance to read Charles Krauthammer’s commentary on President Trump, it is worthy. The short version: Trump is neither a liberal nor a conservative. He is a pragmatist. He sees problems and wishes to fix them. He is willing to try different things, and if they don’t work, he is willing to try something else. He is probably what we need. It appears Krauthammer did not vote for him, but believes he is the right man for the job at this time. He said it much better and more completely than I, of course. Keep writing!

I enjoy your Diary. You wrote “And the Christian conservative votes for Donald J. Trump!” Do you envisage a Christian voting for Hillary R. Clinton?

Triple-digit gains will be made in days, not years…

That’s the message from master trader Jeff Clark. Jeff sees heightened volatility in stocks as a way to lock in fast profits in a matter of days. Here’s how you do it. 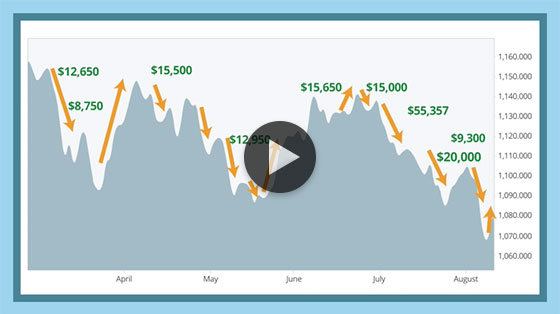