Editor’s Note: Something remarkable is happening in the early stage tech market, and hardly anybody notices. That’s the message from Jeff Brown, today’s guest editor in this special evening edition of the Diary.

Tonight, Jeff reveals a major distortion in the financial markets. He shows why investing in “the next Amazon” has been almost impossible over the last 10 years, and he reveals what investors can do about it.

It’s a bit different from our usual fare here at the Diary. But Jeff’s insights were too intriguing not to share. Read on…

A small company founded in Bellevue, Washington was set to go public. With the modest ambition of selling books online, Amazon (AMZN) listed for just $18 a share.

We all know what happened next… 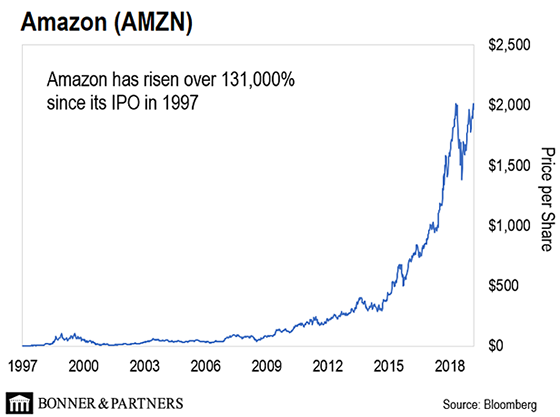 The best part… every retail investor had an opportunity to “get in” on those investment returns. Anyone that had a brokerage account could have enjoyed those kinds of gains.

But sadly, the opportunity to invest in the “next Amazon” has all but disappeared today.

You see, something extraordinary has changed during the last decade. And very few investors know about it…

The pace of technological innovation and new company creation is one we have never seen before. But the opportunities to invest in the next Amazon or Google have all but disappeared.

Back in the late 1990s or early 2000s, if a private technology company had $20-$50 million in revenues and was generating free cash flow (i.e., its cash balance was growing, not shrinking), it was time to go public.

Companies sold shares via initial public offerings (IPOs). This gave them the capital they needed to reach the next stage of growth.

These companies can fund research, development, and revenue growth without the scrutiny and expense of being publicly traded companies.

The chart below gives you some idea of this trend. 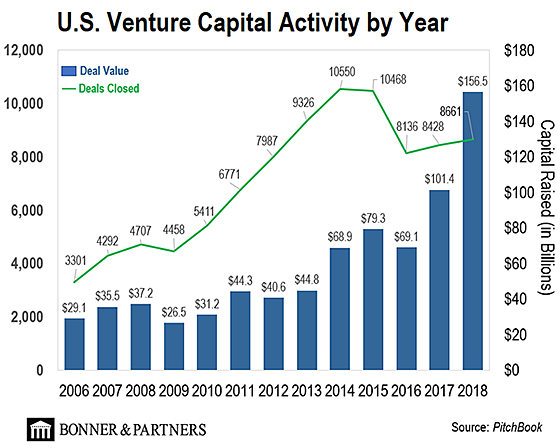 And it’s not just venture capital funds. A flood of private money has been funneled toward early stage tech companies. Since 2009:

These investment flows into technology companies led to 10s of billions of funds in technology annually that never existed before.

That was great news for tech startups that needed capital to grow and develop their businesses. But there was a downside for the average investor…

The private financing of technology companies caused the entire technology IPO market to dry up over the last few years. After all, why would a company go public if it can just raise round after round of private funding?

The below chart shows this trend perfectly. 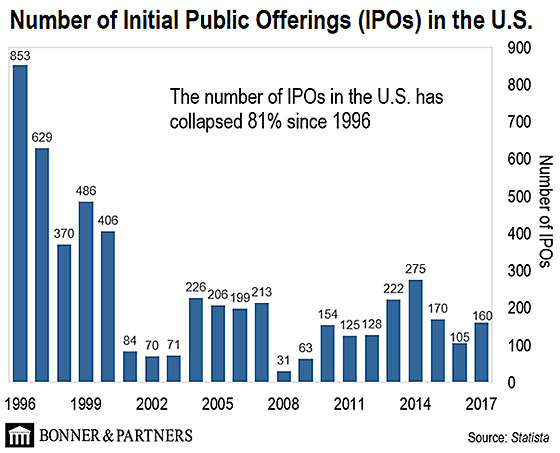 The flood of private capital let leading-edge technology firms stay private for much longer than they normally would. They could have “easy” access to round upon round of new capital to invest in and grow their businesses, without ever needing to go public.

But it also meant that regular, Main Street investors couldn’t profit from these transformational companies. The biggest returns went to connected venture capitalists. Everyday investors were left out in the cold.

But I have good news…

After more than two decades of locking regular investors out of the most exciting technology investing opportunities, the trend is finally reversing.

There are hundreds of “digital-first” tech companies ready to IPO in the near future.

These are companies that were born in the ashes of the 2001 dot-com bust and remained private for a long time because of the flood of private capital into private technology companies.

Collectively, the 2019 IPO boom is expected to set the record for total capital raised by U.S. IPOs in a single year… 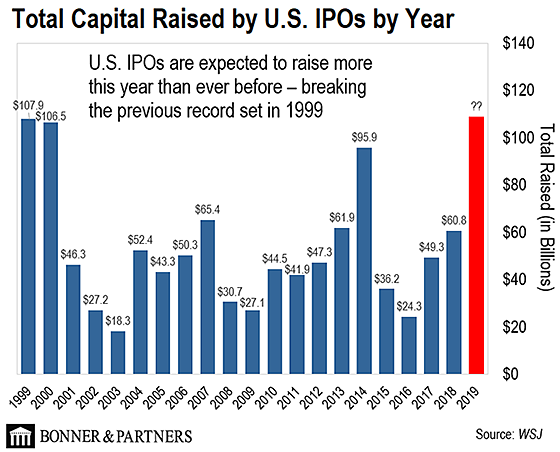 Ultimately, 2019 will be a banner year for tech IPOs. And that will give investors the chance to invest in the most exciting companies on the planet.

Already, companies like Uber, Lyft, Pinterest, and Slack have gone public. For the first time in years, average investors will have the chance to invest in leading-edge technology companies by simply clicking a button in their online brokerage accounts.

And this trend is only picking up. Take a look at total capital raised from IPOs broken down by month: 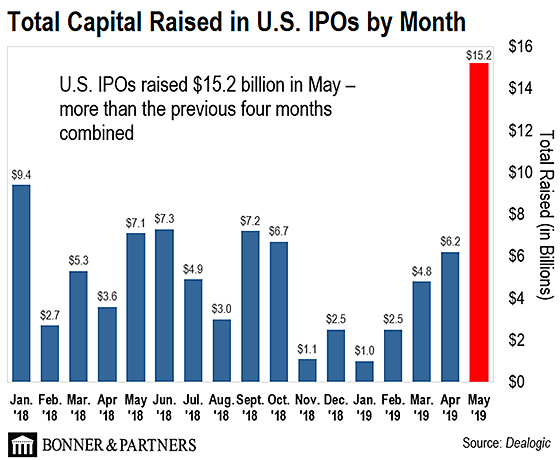 As you can see, May was a great month for IPOs. In fact, U.S. IPOs raised more money during the month of May than they did from January to April combined.

What does this all mean to you as an investor?

It means that, for the first time in years, everyday investors will be able to invest in the best technology stocks on the market.

You’ve likely already heard about some of these blockbuster IPOs, like Uber and Lyft.

But make no mistake. This trend is much bigger than just Uber and Lyft.

There is a backlog of technology deals right now waiting to hit the public markets.

In fact, the largest, fastest returns won’t be found in large IPOs like Uber and Lyft.

For five years, I’ve been quietly developing a system to pinpoint small tech stocks on the verge of explosive moves higher. And I’m finally ready to reveal my research.

If you want to make money in weeks, not years, from early stage tech, this is the best way I know how.

And before you ask, no. I’m not talking about buying pre-IPO shares.

It’s something else entirely. I’ll reveal all the details in a few hours. I’m hosting a free investing webinar tonight at 8 p.m. ET. During the event, I’ll lay it all on the line.

There’s still time to save your spot. Go right here.