GUALFIN, ARGENTINA – Politics – whether local or national – is always a con game.

And the con generally increases with the scale.

Recall our second observation from yesterday:

The old “us versus them” is always a scam. People are unique, with thousands of different cultures… hairstyles, religions… hobbies… businesses…
prejudices… trades… and financial interests. Playing off one group against another merely allows another group – the one with the real power – to gain at the public’s expense.

Policy proposals by Republicans and Democrats set off intense political firestorms – setting “us against them” – but they leave the real distribution of power and wealth untouched.

According to the theory, voters – through their elected representatives – share out the privileges and benefits of political power in a give-and-take, in which one group is the “us” and another the “them.”

Then, by “political horse trading” the tension is resolved, a consensus reached, and “we the people” come out ahead. Democracy works!

There is enough truth to this to keep the theory alive. But the public rarely comes out ahead. Because the real horse trading takes place on a whole different level.

“We” get the nag; somebody else gets the thoroughbred.

Your editor is down here at the ranch. Should he be included in the group of “ranchers”? But wait, no respectable group of cattlemen would have him.

For he is a rank amateur… a greenhorn in every respect… far more at home in front of a computer than on a horse.

And if he had to support himself from a cattle business, well, he’d eat a lot of rangy beef, and not much more.

And yet, there is a cattlemen’s association, lobbying the Argentine legislature on behalf of “we” beef herders. But the “we” is false. The rules are laid down for the benefit of the big professionals on the flat pampas, not the struggling cowmen up in the hills.

In matters of hygiene, paperwork, and pricing – we are forced into practices that are completely inappropriate to an old-fashioned, open-range, mountain cattle business. To make matters worse, young kids – fresh out of college – who know even less than we do, are sent by the government to tell us what to do.

But that is the way it is for everything in public policy. Every individual is unique; every business is different; every “we” is a lie.

You can easily see how the “we” behind tax measures is a fraud. “We want equality,” say the tax mongers. “We” will be better off if we sock it to the rich, they add.

Obviously, we won’t all be better off. The only way they can redistribute wealth is by taking it away from the people to whom it was distributed in the first place. Some win. Some lose. There is no “we.”

Tariffs are similar. They’re supposed to help “bring back jobs.” We all want more jobs, right?

But break down the “we” into its component parts. Imagine that a tariff actually did save a job in Milwaukee. What good would it do the guy in Medford or Memphis? He would gain nothing. Instead, he would have to pay higher prices (if the Milwaukee guy were competitive, there would be no need for a tariff).

Overall, millions of consumers pay more so that a few people gain higher incomes and profits.

All up and down the line, it’s the same thing. One person wins. The other is a chump.

Yesterday, we looked at stimulus measures. Surely, “we” all benefit from a stronger economy, right? And surely we’re all better off, thanks to the Fed’s stimulus policies of the last 30 years, right?

But the feds can only “stimulate” one part of the economy by unstimulating another. They can lower interest rates, for example. But then, savers earn less. Stock market speculators earn more. They can buy bonds. But what about people who don’t own bonds?

Wait, you say. The saver just has to get with the program. Nothing is stopping him from speculating on stocks and bonds, too.

But the typical wage earner has neither the time, the experience, nor the deep well of cynicism needed to compete with the pros. Imagine that millions of moms and pops took their savings and piled into the stock market. God help them! The sharks would eat their lunches and drive away in their pickup trucks.

Stocks would go up to even more absurd heights – while the real economy, where real goods and services are produced – would be as lame and limp as before.

And now that you mention it, the wage earner is doubly cheated. Not only does he earn nothing on his meager savings, he also suffers from the inflation that “stimulus’’ measures cause.

He hasn’t been able to keep up with it; his real income is down 5% over the last 40 years. And that’s by the official figures. The real damage is worse.

Take our example of purchasing a common middle-class item: a Ford F-150.

Did “stimulus” policies help him? No… They hurt him.

All public policies are win-lose, in other words. The feds can only give something to one group by taking it away from another. Some win. Some lose. The “we” is a fraud.

But some people always win, don’t they? Who?

We can see you squirming in your seat, Dear Reader… your hand in the air… eager to shout out the answer. But hold that thought…

P.S. Before you go, one last thing. Many of you are readers of our monthly letter, The Bill Bonner Letter. Longtime readers may even recognize the name E.B. Tucker. Our arrangement with E.B. was simple. We would connect the dots, and E.B. would provide the investment analysis. He’s one of the few analysts we ever trusted to make recommendations in our Letter.

I mention this because E.B. is hosting an online event tomorrow night. He believes he may have uncovered something that would be of interest. At the very least, dear readers are certain to learn something new. You can get the details right here.

Estimates for company earnings are on the decline in 2019…

Publicly traded companies are required to file earnings reports every quarter. Earnings for the first quarter of 2019 won’t be released until after March.

But both company and Wall Street analysts estimate quarterly earnings months in advance of those reports. Today’s chart maps their earnings growth estimates for Q1 2019. 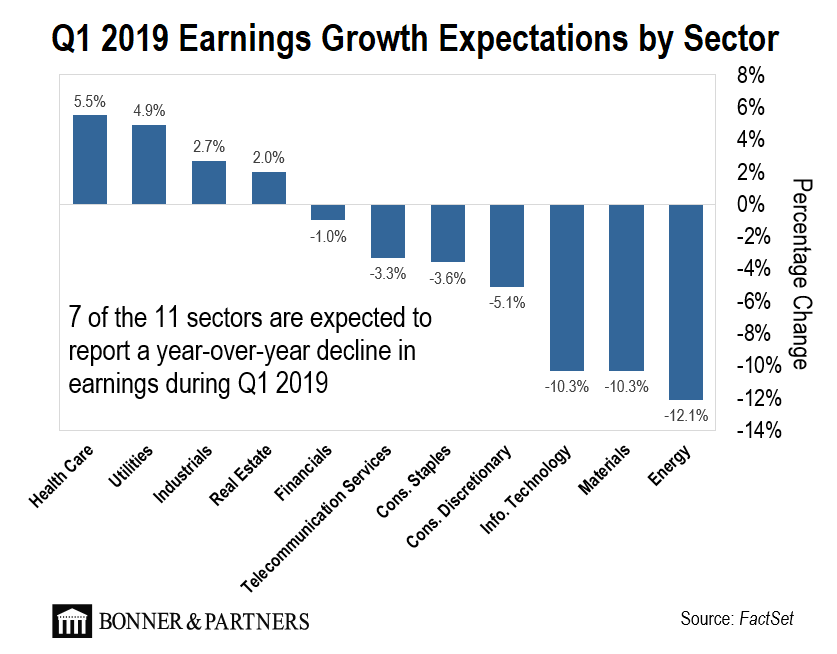 In other words, the expectations of Q1 2019 are a remarkable about-face from the actual results we saw at the end of last year.

This is yet another warning signal for stocks in 2019…

Investors tend to respond emotionally to earnings announcements. Stocks jump if earnings are upbeat, and they fall if earnings decline.

Big Tech’s Worst Nightmare Is Going to Washington
The average person probably doesn’t know the name Lina Khan. But if you’re a Silicon Valley executive, the name might give you nightmares. Khan is the author of a Yale Law Journal article that outlined how Big Tech could be broken up on antitrust grounds. And she looks to be headed to D.C…

How to Burn $100 Billion in Six Days
The U.S. Department of the Treasury faces a strange dilemma. This Friday, the federal debt ceiling will go back into effect. But there’s a strange catch. The U.S. Treasury must get its cash balance to the same level it was at when the debt cap was lifted back in February 2018. Translation: Uncle Sam has to find a way to shovel more than $100 billion out the door by week’s end.

The Best Way to Hunt for Gold
Gold is the “one thing” you need in a market like this, Bill says. But what’s the best way to buy gold? How do you know you’re getting a good price? Casey Research’s E.B. Tucker shows dear readers the way…

In the mailbag: “mafia capitalism”… what one dear reader would say to the politicians in Washington… and why there’s no turning back from this “play-money decision.”

Well, Bill, you got a lot of it right, but I’m not hearing anything about how our constitutional government has actually been replaced in a silent coup, allowing mafia capitalism to govern the economy. In a real capitalist system, the winners are expected to reinvest in the economy. What’s happening instead is that the winners are simply taking their chips off the table and hiding them offshore, or putting them into the Wall Street economy to create artificial bubbles, which they can control and milk to their heart’s content. Reinvestment does create jobs and can result in real profit and surpluses. That’s clearly not happening. I challenge you to an honest discussion about why that is not happening.

Here’s what I would love to say to a politician in a public forum:

Me: “Mr. Politician, would you agree that our current monetary-economic system requires perpetual growth to avoid collapse?”

Me: “I’m curious to know how a system that requires infinite growth, can sustain on a finite planet, with finite resources. It seems to me, that it cannot sustain itself. Therefore, it’s not a question of if the system will collapse, but rather a question of when. So when it does collapse, what plans are in place to replace the current system?”

Of course, it’s highly unlikely that a conversation like this would ever be shared by the bought and paid-for mainstream media. After all, the primary idea behind politics is to keep the masses divided and distracted, pointing their fingers at each other, while the owners of the system keep the trickle-up economy on steroids.

When I lost my first house I built as a real estate agent in 2007, I vowed to figure out this sh*t show going forward. I was 21 years old, building a half-million-dollar house – with a degree in economics – which I soon realized is only a half-real world. You’ve said it before. There is no turning back from Nixon’s play-money decision. We aren’t getting out of debt. But the show must go on! As long as “someone” keeps buying our debt…

Bill, you and Trump both want no barriers to trade. So, why do you keep dumping on him? It is China, Europe, and others who have barriers to free or fair trade, and he is trying to even the playing field. This is a hard task, as previous administrations have allowed them to get away with it for 40 years. So, if negotiations take a bit longer than you like, so be it. What matters is the result, not the rhetoric or posturing.

I enjoy hearing of your escapades. I am a fourth-generation rancher from Nebraska. Your story rings so true. You can see why we love our way of life, and fight so hard for it. We endure many obstacles in the process.

If you’re done with cryptos… weed stocks… or options, then go right here.

Our friends at Casey Research have uncovered an entirely different way to potentially make 1,000% this year. Get the full story right here.