POITOU, FRANCE – This just in…

The man who made America great again in record time – only 18 months – with unemployment at half-century lows and stocks at all-time highs… now says he is “not thrilled” about the Fed’s tightening policy.

Trump said in an interview with Reuters on Monday that he was “not thrilled” with the Fed under his appointee, Chairman Jerome Powell, for raising rates and that the U.S. central bank should do more to boost the economy.

When it comes to increasing rates, Donald J. Trump is not loving it.

We think we see where this is going. In preview, when it leads to where we think it leads, we’re not going to be loving it much, either.

Remember, the Fed now claims to be making Mistake #2: raising rates to try to stop the damage it caused with Mistake #1 (leaving them too low for too long).

It is actually still making Mistake #1, since the federal funds rate is still below the Consumer Price Index (inflation).

Net, it is still lending to member banks at negative rates – nearly 10 years after the “emergency” that caused it to panic in the first place.

But even the thought of raising rates (Mistake #2) troubles the sleep of the president, who described himself as a “low-interest rate guy.”

But the Fed knows it can’t stick with Mistake #1 forever. If it did, the markets would balloon up and burst… Then, the Fed would have to make Mistake #3 (cutting rates in a panic)… with no rates to cut.

This sometimes puts the pols at odds with the Fed.

Lyndon B. Johnson was not thrilled by Fed chief William McChesney Martin’s tight money policies; he thought the Fed needed to help finance the war in Vietnam.

Nixon pressured Fed chief Arthur Burns to keep the money flowing through the election of 1972.

Jimmy Carter was an exception. With his sweater and his Whip Inflation Now button, he was not loving the inflation that his Fed chief, G. William Miller, had caused.

He replaced Miller with Paul Volcker, the only honest, sensible Fed chief in the last 40 years. Volcker enacted his own form of “shock therapy,” and boosted the federal funds rate to a peak of 20% in 1981, effectively squashing inflation.

But after Greenspan (probably unwittingly) ruined Bush’s re-election chances, he teamed up with the Clintons.

We turn to a 1993 report from The Washington Post:

The book, The Agenda: Inside the Clinton White House by Washington Post assistant managing editor Bob Woodward… recounts what Woodward calls a crucial meeting between Clinton and Greenspan in Little Rock, Arkansas in December 1992, the month before Clinton’s inauguration.

Greenspan outlined to Clinton an economic policy Woodward calls the “financial markets strategy,” in which policy was constructed to send a message to Wall Street, which responded by driving down long-term interest rates that allowed Greenspan to keep short-term rates down as well.

According to the theory, the economy would then improve, and Clinton would have more to spend on favored domestic programs in later years and ultimately would be re-elected.

The plan worked. EZ money got Bill Clinton re-elected. And at Clinton’s first economic address to Congress, who should get the place of honor next to the First Lady? None other than the architect of the plan, Alan Greenspan.

The financial world we live in today is essentially the result of Greenspan’s EZ-money strategy. And it almost got Hillary elected, too.

Every president and key advisor knows how the game is played. Fed policy is put to work like presidential press conferences and fake news – to mislead the voters.

Generally, the Fed makes Mistake #2 early in the election cycle. That will bring on a recession/bear market that can be blamed on the previous president.

Then, the Fed needs to move to Mistake #3 in time for the new credit to make its way into the economy so it will be running hot for the next election.

In this regard, Obama hit a home run. The crash/recession of 2008–2009 was clearly the fault of the Bush Team.

Then, soon after taking office, the Obama Fed, still under the leadership of one Ben Bernanke – the biggest dunce to lead a central bank since Gideon Gono in Zimbabwe – was able to begin making Mistakes #3 and #1 again… with the EZ-est money ever seen.

Now, with the economy still running hot, Donald J. Trump is at bat. And coming soon is a curveball.

That is, it appears Mr. Trump did not understand the game at all. In January 2017, he should have insisted on Mistake #2, bringing on a recession that he could have blamed (rightly so) on Obama.

That would have allowed him to get the hurt out of the way early, so he could then pass a tax cut… lower interest rates… and take credit for Making America Great Again by 2019, in time for the next election.

Instead, Mr. Trump passed his tax cut at the wrong time in the cycle… and took full credit for the results of the Obama-era Mistake #1 (leaving rates too low for too long).

Instead of putting the pain behind him, he has left it in front. And now, he is encouraging the Fed to stick with Mistake #1 for even longer.

How this will play out – in Mistake #4 – will be the subject of tomorrow’s Diary.

Small-cap stocks are on a tear this year…

That’s the story of today’s chart, which maps the “small-cap” Russell 2000 Index from August 2017 to today. 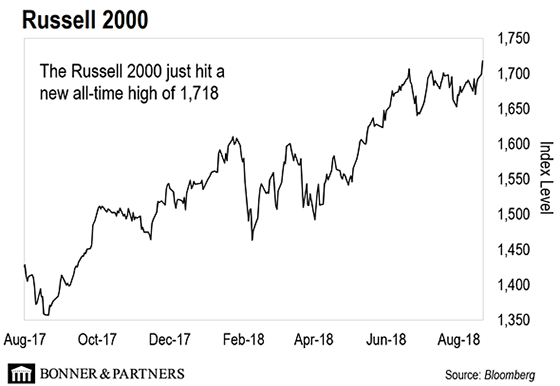 As you can see, the Russell 2000 just hit a new all-time high of 1,718… eclipsing its previous high set back in June.

One explanation for the run-up in small caps is the ongoing trade war. Tit-for-tat tariffs tend to impact big companies, like those found in the S&P 500, that do the bulk of their business overseas.

But small caps, like those in the Russell 2000, are less impacted by tariffs because they do most of their business domestically.

Hoarding Is Big Business
It’s never been easier to buy things. Thanks to e-commerce giants like Amazon, Americans can now shop whenever for whatever. Some even do it in their sleep. It’s a boon for e-commerce companies… But is it turning Americans into hoarders?

Oregon Senator: Platforms That Don’t Remove “Bad Actors” Should Be Punished
Alex Jones, the Infowars host with a penchant for conspiracy theories, was temporarily suspended from social media accounts like Twitter and Facebook last week. According to one U.S. senator, there are plenty more like Jones who need to go. And he’s got a plan to remove them…

What Ends Civilizations
As Bill reported above, the political ideologies of many Americans are shifting further and further left. A majority of millenials – people in their twenties and early thirties – now identifies as socialist. Casey Research analyst Nick Giambruno thinks he knows what’s behind this trend…

Will Trump be the next Herbert Hoover? Dear readers take up the question…

Comparing President Trump to Herbert Hoover – that’s a really great use of your readers’ time. It’s obvious that President Trump isn’t your cup of tea, but unless you have turned socialist, you should wake up and read the numbers. Maybe being in socialist-like France and/or spending time in socialist Argentina has messed up your mind. Buck up, ole boy!

You forgot to mention that – like the orange face in the White House – Herbert Hoover started a trade war with tariffs, which probably caused the crash of 1929.

Bill, it’s policy that matters. President Trump would never make the mistake of implementing wage controls and other reactions that Hoover did. Hoover’s policies made the Great Depression three times worse, according to a recent study by a professor at UCLA. Tax cuts, border security, ending ridiculous agreements with foreign governments, cutting regulations, fair trade agreements, fair share of defense spending in NATO, cleaning up the swamp… these are policies that have made America great again.

Many people inherit millions from their parents – to many, this is a curse, like winning the lottery. President Trump, however, does not drink or do drugs, and has worked very hard to grow his inheritance to $4 billion rather than squander it like so many children of wealthy parents do.

Ah Bill, I pity your poor readers. There are so many of them, safe and secure in their Hoovervilles… er, Trump-branded matchstick bungalows… watching all those truth bombs you’re flinging throw shadows on the ground as they approach for landing. Trump brought to us by the one living God? Trump mobilizing the downtrodden and rebuilding the infrastructure? Come now, he’s done no such thing.

At best, Trump is a two-bit carnival barker. At worst, well… I don’t think your readers are even close to ready to hear about that yet. They have fallen for his shenanigans hook, line, and sinker – like a doe-eyed, Midwestern girl leaning on a Manhattan cocktail bar. Here you are trying to warn folks not to go home with the fella. And they’ll have none of it. I hope they have fare enough for the shameful cab ride home in the morning.

OUR CALL WITH JEFF BROWN…

We just got off the phone with Jeff Brown, Bill’s go-to tech expert.

Jeff told us how Magic Leap, one of the most richly valued private companies in the world, just released its first augmented reality (AR) product for the consumer market…

Jeff thinks AR devices could be “the next iPhone.” But in order to work to their full potential, these futuristic goggles will need this one piece of technology first. 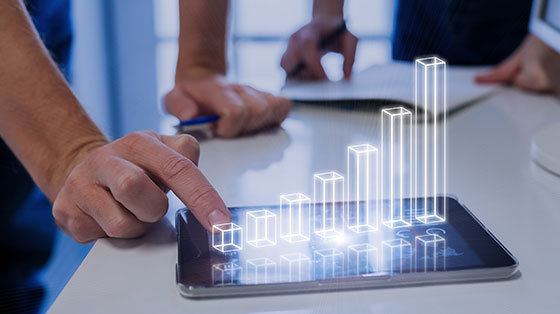