LONDON – We first came to London a half-century ago. Back then, the city was tired and drab.

We stayed in a hotel, where we had to put coins in a heater to get any warmth and use the bathroom down the hall.

Now, London is a different city, full of young people, energy, and money.

Streams of people flood across Blackfriars Bridge in the morning – heading for one of the many daring new office buildings. As T.S. Eliot put it, we did not think death had undone so many.

Then, in the evening, the tide reverses; people return to the train stations… or wash up in one of the thousands of chic restaurants or trendy bars throughout the city.

“There is nothing like this in any other city in the Western world,” said a friend. “Paris is a museum. New York and San Francisco are tired and pale by comparison. This place is so dynamic.

“There are so many new buildings… so many people coming in from all over the world… and so much money pouring in, too.”

Where the money comes from is the dot we’re looking at today.

But before we get to that, we pass along a provocative suggestion from a dear reader:

Bill, you’re right about how capitalism is supposed to work. But you don’t work that way. You don’t give your customers what they want. You give them what you think they should have. As many of my fellow readers have pointed out, you’d make a lot more money if you got on the Donald Trump bandwagon and stopped annoying us by criticizing him.

We’re going to think about that overnight…

In the meantime… whence cometh London’s amazing wealth? And who cares?

Approaching the issue from the other end… let’s look at a place that has made itself desperately poor.

The New York Times is on the case:

Zimbabwe’s collapse under Robert Mugabe. The fall of the Soviet Union. Cuba’s disastrous unraveling in the 1990s.

The crumbling of Venezuela’s economy has now outpaced them all.

Venezuela’s fall is the single largest economic collapse outside of war in at least 45 years, economists say.

In the last five years, Venezuela’s GDP has fallen by nearly two-thirds. Inflation is running over 10,000,000%.

And today’s Financial Times tells us that “Venezuelans queue up for petrol, despite sitting on huge oil reserves.” Motorists are waiting in line for up to 20 hours to fill their tanks.

Venezuelans are living… or dying… through the most hellish economic catastrophe of the 21st century.

But the century has 81 more years to go. Our guess is that there are bigger disasters ahead.

There is nothing particularly novel about the Venezuelan debacle. It’s the kind of thing you can get when you mix bad politics with bad money.

Venezuela, we remind readers, was recently the richest country in Latin America, with vast reserves of the world’s No.1 resource – energy.

So, what went wrong?

There are many plots and subplots in the story. The Chavistas nationalized key industries, replacing capitalists and capable engineers with party loyalists and cronies. Output declined.

All of this alone would have been bad enough. But then, there was the money. Or rather, the fake money. The same kind of money that Americans borrow… and that American tourists spend in London.

As far as we know, no disaster of this sort has ever occurred without fake money being involved.

You can have wars without fake money, though the two often go together.

You can have inflation without fake money, but it is rare and much less destructive.

You can have a depression, too. Even in the case of a depression, it usually ends quickly… unless the feds step in and block the correction, as they did in the 1930s.

You can have bad food, bad public policies, bad breath, and even bad weather.

Inevitably, in both cases, it goes to their heads.

Not only has fake money been an essential part of every financial disaster, it always leads to some sort of societal disaster, too.

Which is why we suspect a bigger disaster is coming later in the century… and why we suspect it will be centered in the Fake Money Capital of the World – the USA.

Fake money is as old as the hills. But it usually only takes a few years before the fakeness of it is exposed… the financial system blows up… and real money is brought back.

But what makes fake money bad? And why, if it’s such a bad thing, does nobody notice but us?

Today, we have another sign that the snapback rally in stocks is on shaky ground…

Despite the strong rally we have seen this year, bank stocks are still in the red.

That’s the story of today’s chart, which compares the S&P 500’s performance to that of the Dow Jones U.S. Banks Index since the start of 2018. 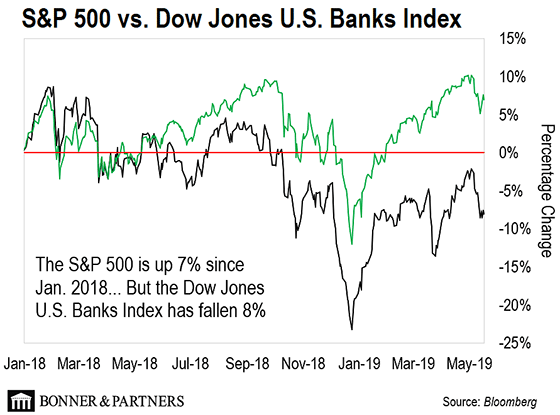 This is important to note because financial stocks make up 13% of the S&P 500. And they tend to lead the market. That’s because banks are a key cog in the flow of money. And the flow of money is crucial to the economy.

If you recall, the S&P 500 dropped about 20% from September 20 to December 24 last year. Meanwhile, the Dow Jones U.S. Banks Index plunged 27% in about that same time.

This is an ominous sign. If bank stocks continue to struggle, the S&P 500 is likely headed lower in the coming months.

P.S. We’re not the only ones concerned about the future of U.S. stocks. A friend of the Diary, Jeff Clark, has been ringing the bell on this bull market. And tomorrow at 8 p.m., Jeff will reveal the day he believes will mark the end of this snapback rally.

But rather than be worried, Jeff is looking forward to the volatility. That’s because his Delta Report readers stand to make a lot of money when stocks fall. And no, Jeff’s not “shorting” stocks. Get all the details for yourself here.

Quantitative Easing Forever?
Analysts project that, as soon as next year, the Fed will continue gobbling up U.S. debt – this time, in the form of U.S. Treasuries. The Fed’s buildup of U.S. Treasuries is projected to exceed the quantitative easing (QE)-era levels. While this round won’t be called “QE,” experts warn the effects will be largely the same…

Today’s Tech Giants Are Burning Cash at a Breakneck Pace
The days of frugality in the technology sector are gone. While long-established Big Tech darlings like Amazon and Apple rank among America’s most valuable enterprises, they didn’t get there by burning through cash. Newcomers like Tesla and Uber are devouring cash… making it harder and harder to reward investors…

Imagine That the Stock Market Is a Game Show…
You’ll never go broke taking profits. That’s what the old-timers on Wall Street will tell you. And as this master trader sees it, when it comes to investing, you take the money… and ignore what’s behind curtain number two.

In today’s mailbag, readers talk about the “idiot in the White House,” your editor’s wisdom, and the death of America…

You often write about win-win and win-lose tactics, but in reality, there are only win-win and lose-lose. If both sides don’t feel they have won something in a trade, the losing side is encouraged to also play win-lose, and no one really wins when anyone feels they have lost something. The idiot in the White House is really a lose-lose believer. And he could get us involved in war on several fronts, which is the epitome of lose-lose.

Thank you for your wisdom, Mr. Bonner. We need to be challenged and now! Thank you for this website, it gives me hope that there are some in the business world who are thinking about people, i.e. families, children, grandparents, those who have struggled to build this incredible country. It brings tears when I see what has happened to us. We put babies/children in cages as political pawns because a psychopath has conned us into thinking a dictatorship is good for the economy. Where are the children of those who have worked so hard to bring this country to caring for others?

It breaks my heart to remember the 1960s, when we marched for the good of the people. Keep helping us realize what’s happening to us and those who will be born into a society where money, fame, and mental illness in our top leadership are voted in and families are split asunder because paranoia, greed, and breaking the law are now top priority. Keep up the balance, Mr. Bonner!

Greed is the problem. Most people are greedy to some extent because they all want as much for themselves as they can get. But no country or people embody greed with more perfection than America and Americans.

America was founded on greed and has embraced greed throughout its history with fanatical fervor: Wholesale slaughter of the native indigenous peoples in order to steal their land; the enslavement of blacks; razing the forests for timber; hunting and trapping animal species into extinction; companies murdering their own employees during strikes because they tried to organize labor unions to demand safe working conditions and their fair share of the company’s profits; hordes of immigrants, who came to America in search of “a better life” (i.e. more money); banks consolidating until they are “too big to fail;” corporations moving their operations and the jobs they provided to China, Mexico, India, or wherever in search of cheaper labor, etc. etc. ad infinitum.

Is it any wonder that things are so bad now… that they look so hopeless? Is it any wonder that short-sighted fools elected Donald Trump to office to save them from the greed of the Deep State, its cronies, and a system rigged against them, all the while ignoring the fact that Trump is the greediest and most corrupt of them all? R.I.P. America. But I fear that your demise will not be a peaceful one.

You’re not going to hear this from the mainstream media. And most investors will panic. But traders have the chance to potentially make a fortune… especially if they use Jeff’s strategy.

This could be your chance to see windfall profits as the market crashes. Tune in tomorrow night, at 8 p.m. ET, for all the details. Reserve your seat for this event, now. 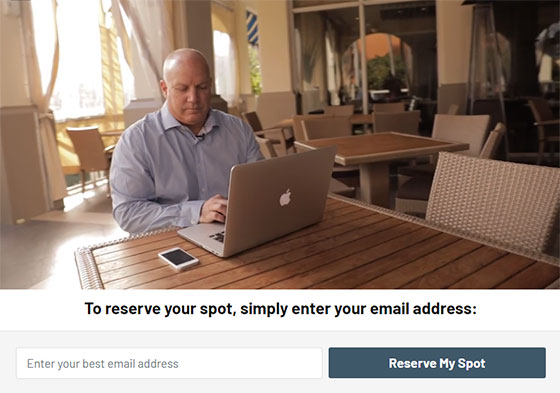