Note From Bill: Dear readers will be familiar with our “Doom Index.” It’s an early warning system designed to track the health of the Main Street and Wall Street economies… and raise the alarm when cracks are forming.

The index is monitored by the able Joe Withrow. As Joe will show you below, after reaching our “extreme warning” level earlier this year, the Doom Index has cooled off. But that’s only half of the story. Read on…

Today, we check in on our Doom Index reading for the second quarter of 2018.

Regular Diary readers will remember that the Doom Index is made up of 11 key indicators. These indicators track the health of both the Main Street and Wall Street economies. [For a full review of the Doom Index, go here.]

After reviewing all the data from Q2, here are the results…

For the second quarter of this year – from the start of April through the end of June – the Doom Index level is at 6. That’s down from 7, where the Doom Index ranked for Q1.

The cooling off of the Doom Index was fueled mostly by positive results from the Main Street economy.

For instance, we pay close attention to the ISM Manufacturing Index. This is a survey of more than 300 U.S. manufacturing firms that gives us a snapshot of the overall health of the manufacturing sector. It monitors employment, production, and inventory levels, among other things.

The ISM Manufacturing Index rose 5% in the second quarter over the first quarter. Manufacturing is picking up, in other words. Plants are humming. America is producing more stuff. 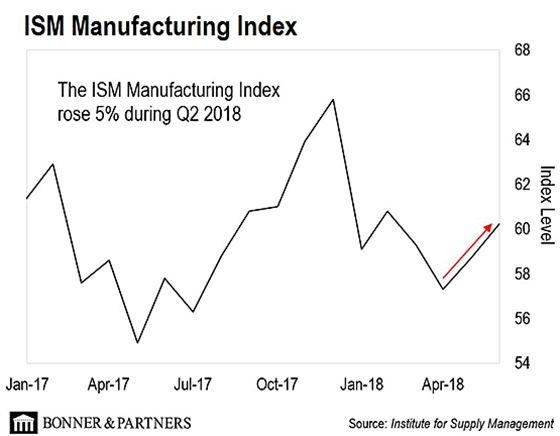 Then we have railcar traffic.

That may seem like a strange thing to monitor. But super investor Warren Buffett says that if he were stuck on a desert island and was allowed only one indicator to tell him how the U.S. economy was doing, he’d pick railcar traffic.

Trains move about one-third of all U.S. exports. And they move about one-quarter of all U.S. freight. So when railcar traffic is picking up, we know that American businesses are shipping more goods. That’s a positive sign for the economy.

Railcar traffic was up 4% in the second quarter over the first quarter. 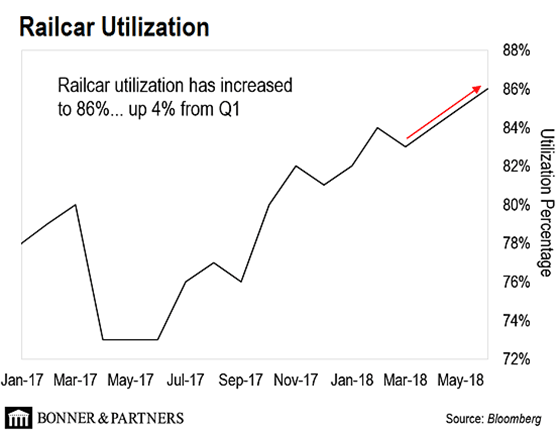 Finally, wage growth for nonfarm payrolls – which refers to any job other than in farming – jumped 1.9% in the second quarter over the first quarter. That’s the largest quarterly increase going back to 1998.

Americans are making and transporting more stuff. And overall, wages are rising. Those are all positive signs for the economy.

The Doom Index doesn’t just monitor the health of the Main Street economy. It also looks at what’s happening on the financial side on Wall Street.

The really bad news is that U.S. stocks are at nosebleed valuations.

One way we gauge this is by looking at one of Bill’s favorite metrics, the cyclically adjusted price-to-earnings (CAPE) ratio.

The CAPE ratio looks at the price of stocks relative to their average earnings, adjusted for inflation, over the past 10 years. This allows us to “smooth” out the year-to-year swings in earnings to get a better “big-picture” view.

And as you can see from the chart below, the S&P 500 is now more richly valued on a CAPE ratio basis than it was in 2007 – just a year before one of the worst stock market crashes in history. 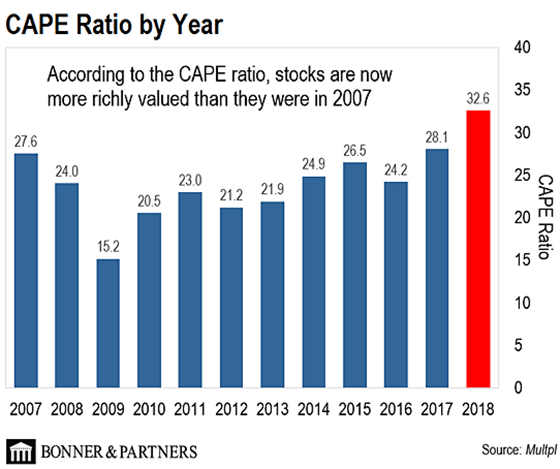 But the CAPE ratio is still well below its all-time high of 44.2 set in 1999, during the peak of the dot-com boom.

That said, the CAPE ratio is not without its detractors. For instance, Bill’s ace stock picker, Chris Mayer, doesn’t like the CAPE ratio because it looks too far back into the past. As he points out, what matters most to investors is what future earnings will be like, not what past earnings were like.

Nevertheless, when you crunch the numbers, you see that when the CAPE ratio has been under 10, the average 10-year return for the S&P 500 has been 11%.

But when the CAPE ratio has been above 25 – where it is now – the average 10-year return for the S&P 500 has been less than 2%. So we believe it’s still an important indicator to look at. 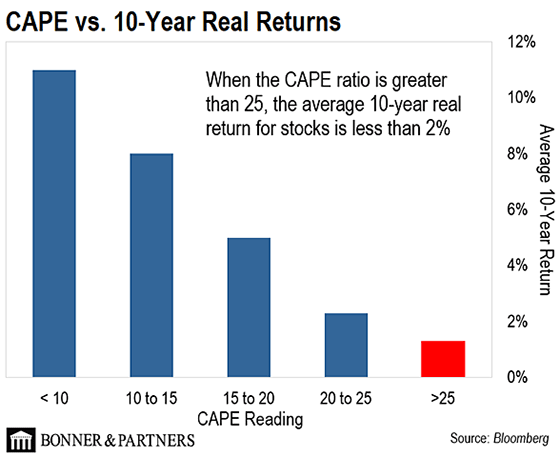 The kind of elevated reading we’re seeing today doesn’t mean that a stock market crash is imminent. As economist Lord Keynes noted, the stock market can stay at irrational levels for long periods.

But with stocks as expensive as they’ve been in 17 years, it’s reasonable to expect disappointing returns on the horizon.

Finally, two more things stand out on the financial side…

First, we’re seeing weakness in the market for “junk bonds.” Also known as high-yield bonds, these are bonds issued by corporations considered to be at a higher risk of default.

We include junk bonds in the Doom Index because they’re a good indicator of investors’ appetite for risk. If folks are gobbling up junk bonds, they’re not too worried about defaults. When junk bonds sell off, it signals that investors are nervous about getting their money back.

One of the indicators we’ve been monitoring is the iShares iBoxx $ High Yield Corporate Bond ETF (HYG). It’s one of the largest and most-traded U.S. junk bond funds. And it’s been trending lower all year so far.

HYG is down about 3% since January. That may not seem like much. But it reveals that investors aren’t fully confident in the strength of the bull market.

They’re not gobbling up junk bonds like they were throughout 2016 and the first half of 2017.

The second thing that stands out is the ratio of corporate bond downgrades versus upgrades.

When a company wants to raise money, it can issue bonds. And it’s the credit rating agencies – Standard & Poor’s, Moody’s, Fitch, etc. – who determine the creditworthiness of those bonds.

For 11 of the past 12 quarters, we’ve seen the ratings agencies issue more downgrades than upgrades.

This doesn’t mean corporations will default on their bonds, but it does mean they are more likely to. It’s a sign that cracks are forming in the credit markets.

It’s not a problem – yet. But it could soon become one, since interest rates are on the rise.

As Diary readers will be aware, the Fed has already hiked short-term interest rates twice this year, by a quarter of a percent each time. And Fed chair Jerome Powell says we’ll see two more rate hikes before the end of the year.

Meanwhile, U.S. corporations have $4 trillion in corporate debt coming due over the next three to five years. If these companies can’t pay off this debt load in full, they’ll have to roll that debt over at higher rates.

This will push up their debt servicing costs… and push down their profit margins, as more of their revenue goes to pay the interest on their debt.

And if companies are unable to refinance at higher rates, they’ll have to fess up to the fact that they can’t pay their debts.

Then, you will see bankruptcies and defaults. That sort of panic could easily spread to the stock market and the broader economy.

We’re seeing what I call a “tale of two economies.”

The Main Street economy is relatively robust. Manufacturing is picking up… more goods are being shipped… and more people are getting back to work and earning more – at least, according to the official numbers.

But the Wall Street economy is looking sickly. Stock valuations are stretched to the point where it’s hard to see them delivering strong long-term returns. The creditworthiness of America’s corporations continues to fall. And rising interest rates pose a potentially lethal threat to their $4 trillion corporate debt load.

The Main Street and Wall Street economies are diverging. And that’s cause for worry.

This can be summed up by the so-called “Buffett Indicator.” It compares the market value of all U.S. stocks to U.S. GDP. 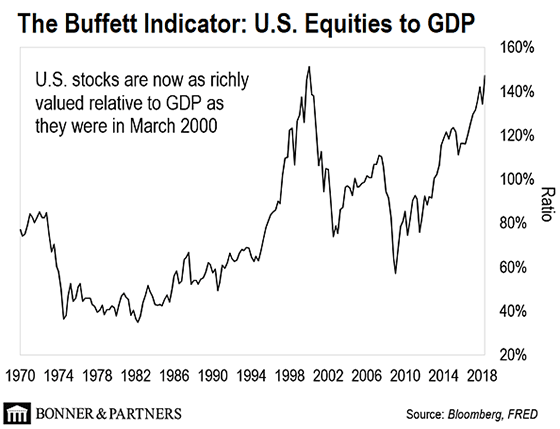 From here, two things can happen…

Judging by what we saw in 2000 and 2008, we believe the latter is the most likely outcome.

We’ll provide another update on the Doom Index next quarter.

P.S. We recently added a dedicated Doom Index page to the Bonner & Partners website. We’ll post regular updates on the index and provide updated readings every quarter. You can view it right here.