Editor’s Note: As Bill showed you all week, the Fed’s policies haven’t done much for the real economy… it simply juiced stock and bond prices.

And as Casey Research’s Nick Giambruno shows below, all of this “stimulation” has set the stage for something even worse… an “everything bubble.” And when it pops, it could send the economy into a recession. Today, Nick reveals what could topple today’s bull market, and what investors need to do right now…

As regular readers of the Diary already know, the Fed responded to the 2008 financial crisis with unprecedented amounts of easy money. It claimed it would “stimulate the economy.”

But as Bill has been showing you all week (catch up here, here, and here), all that “stimulation” did absolutely nothing for the real economy. All it did was push up the price of financial assets, specifically stocks and bonds.

The $3.7 trillion created by the Fed for its “quantitative easing” (QE) ended up creating not just a housing bubble, or a tech bubble, but an “everything bubble.”

And within the everything bubble, the bond market is the most warped part. It’s where the biggest distortions are.

And I believe it’s in danger of toppling…

Let’s start with the basics. Corporate bonds are debt issued by companies to raise money. They include regular interest payments and a principal payment when the bond matures.

Remember, the Fed responded to the 2008 financial crisis by printing over $3.7 trillion to buy bonds. This manipulated interest rates to historic lows.

Corporations took advantage of these historically low borrowing costs by issuing mountains of debt. This, in short, inflated an unprecedented corporate bond bubble.

As you can see in the next chart, total U.S. corporate debt is up 83% since the 2008 financial crisis (which, itself, was caused by too much debt). 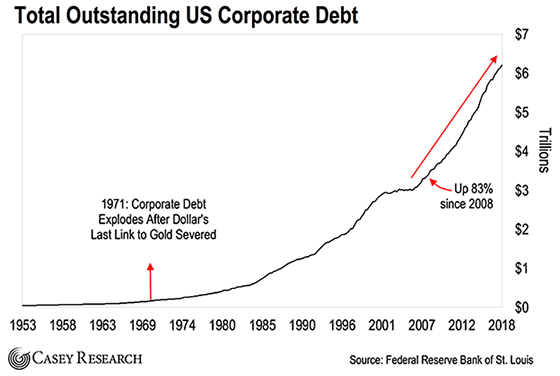 As a result of this borrowing binge, U.S. corporate debt is at a record high, at over 45% of gross domestic product (GDP). It’s worse than it was at the peak of the tech bubble, the housing bubble – and at every other credit cycle peak, as the next chart shows. 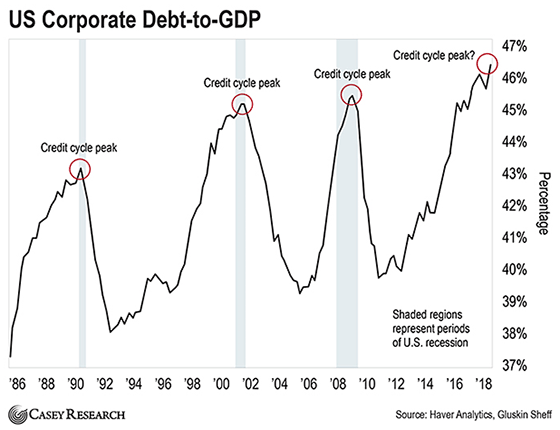 Historically, when companies are this saturated in debt, things don’t end well. This time won’t be any different, except companies are even more leveraged, so the bust will be even more severe.

And there’s more… The true situation is actually worse.

In the U.S., government spending accounts for a whopping 36% of the entire economy. Strip that out of the equation, and the debt to productive GDP ratio shoots to over 70% – an all-time high.

Now, that all might not be a problem if American corporations were on sound financial footing.

They could pay their debts if things got rough and move on.

But that’s not the case for many American companies…

The Bank of International Settlements has calculated that about 16% of U.S. firms are “zombies” – meaning they can’t cover the interest payments with their current profits. They have to borrow more just to pay the interest on their debts.

In other words, without access to cheap credit they wouldn’t be zombies… they’d be dead.

You can think of these zombie companies as the freakish offspring of the Fed’s money-printing programs (QE). They’re just one result of the malinvestment made possible by the trillions of dollars in post-2008 easy money.

Then, there is the sorry state of corporate bond ratings…

Credit ratings agencies like Moody’s and Standard & Poor’s (S&P) review and rate bonds. They issue different ratings depending on the creditworthiness of the issuers.

S&P issues ratings from AAA – the best rating – to D – the worst.

With that in mind, look at the chart below. It shows the size of the market for different investment-grade debt over the past 20 years.

Note that the overall investment-grade market has more than doubled in size since the influx of post-2008 easy money. This growth came disproportionately from BBB-level debt… just one notch above junk. 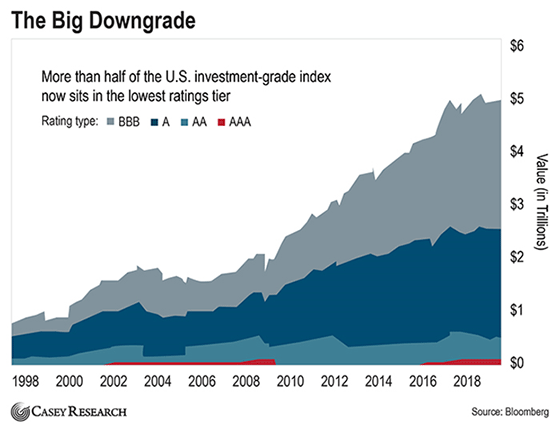 Today, BBB makes up more than 50% of the overall so-called “investment grade” market, an all-time historical high. It’s also now larger than the entire corporate bond market was in 2008.

Why does that matter?

Many big-money investors, including pensions, insurance companies, and other entities, must pay attention to their ratings. That’s because these entities can’t legally own anything below “investment grade.”

So when S&P downgrades a bond issuer from investment grade (the BBB level) to high-yield or junk (BB), these big-money investors must offload them on the market.

That means downgrades from BBB to junk, perhaps caused by a looming recession, could easily flood the high-yield market with new supply and crash it.

In past credit cycles, around 34% of the BBB market was downgraded to junk during a recession, on average.

And remember, when a company’s bonds get downgraded to “junk” the borrowing cost of the company goes up. That makes it more expensive for corporations to borrow and refinance when their bonds mature. That increases the risk of default.

And as history has shown us, rising defaults lead to a tighter credit market. Stocks fall. A recession hits. Everyday investors get wiped out.

Gold is unique. It is hard, honest money, par excellence.

Central bankers and mainstream economists have ridiculed gold for, going on, 50 years now.

Central banks can’t create wealth or anything of value. The only thing they can do is manipulate the money supply. And, as I showed you above, that always has destructive effects.

When the everything bubble “pops,” likely as a result of a crash in corporate debt, you’ll want to make sure all of your wealth isn’t trapped in stocks and bonds.

Gold has protected wealth during financial crises for thousands of years. It will do so again during the next calamity.

P.S. When the everything bubble finally pops, I fully expect gold to soar to all-time highs. You’ll want to own physical gold when that happens. But if you’d like the chance to lock in 1,000% or more from soaring gold prices, then you need to see this.

My team and I have uncovered a unique speculation that I believe could soar 10 times or more when gold takes off. And no, I’m not talking about gold miners. It’s something else. We’re calling it “Casey’s Gold,” after legendary speculator Doug Casey. I guarantee you’ll never read about this on the front pages of Bloomberg. But if you’re willing to stomach a little risk for the chance at life-changing returns, then go here.