First, a report from a friend in Paris:

We were out for a Saturday stroll and rounded the corner to a police van that was getting smashed by… um… freedom fighters, or protestors, or idiots with nothing better to do (not sure which)…

I went closer to get a picture, and just then, the police came flying down the street behind me and the crowd scattered, but not before someone hit the smashed-up police van with what must have been a Molotov cocktail.

But as our friend reports, “Nobody knows what the heck they’re protesting anymore.”

Argentine inflation in February, 3.8% and 51% in twelve months

Inflation rose 3.8% in February, the National Institute of Statistics and Censuses (INDEC) said, as President Mauricio Macri struggles to bring down prices ahead of key national elections this year.

The rise marked the second straight month where inflation has accelerated, underscoring the challenge facing Argentina’s leadership who are battling to stem a slide in the peso, rein in inflation and dig the country out of a recession […] The February inflation increase, the sharpest since October, took 2019 year-to-date inflation to 6.8%, and rolling 12-month inflation in the month was 51.3%, INDEC said.

Fueled by a weak peso, consumer prices in Argentina rose 47.6% in 2018, which analysts said was the highest annual rate in nearly three decades, hitting the country’s spenders as wage growth failed to keep apace.

Earlier this month economists raised their forecast for 2019 inflation to 31.9% from a previous estimate of 29.0%.

“Thank God we don’t live in Paris or Argentina,” you might say to yourself. But that’s just the point; you may soon. Herewith, one observation and one prediction.

First, it’s not so bad. Most Parisians had barely any idea there was smashing and looting going on downtown.

And here in Salta Province, Argentina, even with 50% inflation, life goes on. Our steak was juicy good last night. (A dinner for six… two bottles of wine, included, was only $120.) Our hotel room is clean. The traffic still flows. Fifty percent inflation is not the end of the world. It’s a challenge; but it creates opportunities, as well as disasters.

Second, we suggest a visit to both locales.

Our prediction is that both skills may one day prove as useful on the banks of the Hudson or the Mississippi, as they are now on the Quai du Louvre or in Puerto Madera.

The reasons for the violence in Paris are obscure and largely unfathomable – even to Parisians. So, let’s turn to Argentina.

How did Argentina come to have 50% inflation? Its central bankers and politicians are no dumber than their American counterparts. Its politicians know how to get votes. And the insiders here know as well as elites everywhere how to get into the first-class seats. What went wrong?

Government, as you’ve seen us remark on more than one occasion, is many things to many different people. It is a source of power for some. It’s a source of protection for many. It claims to keep planes from colliding and make sure a quart is actually a quart and not a liter.

It is thought, by some, to boost innovation… and to guide the economy by others. But almost all those things are simply collateral to its basic mission: providing a way for the few to rip off the many.

Taxes, tariffs, regulations – they’re all ways to transfer wealth and power from the common man to the elite who control the government.

But there is an inevitable tendency (driven partly by competition among the insiders themselves) to overdo it.

Rather than satisfy themselves with what they can squeeze out of the turnips in honest taxation, the feds borrow from the future. And then, they bend the financial system – by suppressing interest rates, for example… to make it easier to finance their deficits.

Soon, everyone is deeply in debt. And then, the system arrives at “peak debt,” when the economy no longer produces enough revenue to pay the interest.

All debts must be repaid, sooner or later, one way or another, either by the debtor, the creditor… or someone else. No exceptions.

In the case of government debt, there is no question of the debtor paying. The feds have no money. They talk about “stimulus” and “growing our way out of debt.”

But when debt is increasing twice as fast as GDP, as it has for the last 30 years, “growing your way out” is not an option. Also, as the debt burden increases (along with the phony-baloney price signals that created it and the jackass financial shenanigans that accompany it) GDP growth goes down, not up.

Current real growth is only about half what it was 30 years ago… and may actually be zero.

And, no, the Trump tax cut didn’t really change much. The latest numbers tell us that trends of the Obama era continue as they were before… but worse.

The trade deficit, for example, was $531 billion in the last Obama year. Now it is almost $900 billion. Manufacturing is still below its level 12 years ago.

Sales got a little bump from the tax cut, but now they’re falling back to trend, too. Single-family-home sales have fallen since DJT took office and are now back to a level set in 1991… with the lowest household/home sales ratio ever recorded.

Hiring collapsed in February (possibly a fluke). And GDP growth for this quarter appears to be flatlining.

Which is to say… there is no chance the feds will pay the debt with increased tax revenues. So, who will?

Last month, we suggested that the Federal Reserve was about to make “Mistake #3” – cutting interest rates in a panic.

Now, it appears the mainstream press is gradually coming to the same conclusion: The Fed’s next move will be a rate cut, not another rate hike.

The Wall Street Journal surveys a group of economists each month to find out what they expect the Federal Reserve to do next. Today’s chart maps the percentage of those economists who expect the Fed to cut interest rates later this year. 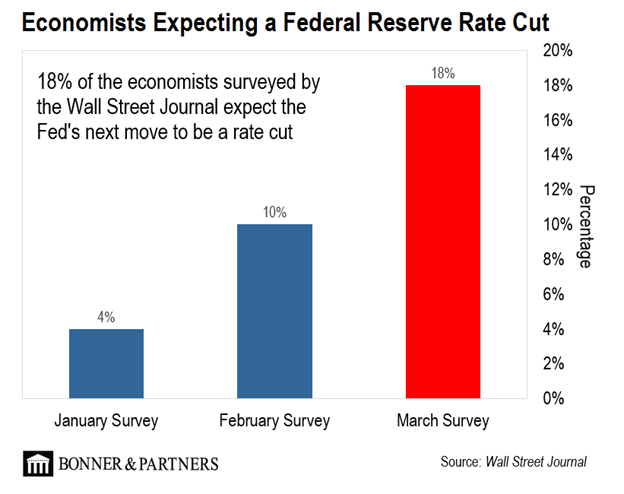 As you can see, 18% of economists surveyed now think the Fed’s next move will be a rate cut. That’s up from 10% last month and just 4% in January.

Eighty-four percent of these economists said they are worried about slowing growth in Western Europe, China, and now the United States. They also see the ongoing trade dispute with China as a major headwind that could linger longer than expected.

Given these risks, they think it is becoming more likely that the Fed will cut rates.

And history suggests that’s what will happen. The last two times the Fed “paused” a rate-hiking cycle, they followed up with rate cuts, not more hikes.

What’s more, the United States fell into a recession within 12-18 months of the Fed pausing its rate hikes on both occasions.

So, if history rhymes, the Fed’s next move will be rate cuts. But they will come as the U.S. economy is staring down a new recession.

Big Agriculture: The Next Data Harvester
It’s no longer just Big Tech harvesting data… When it comes to Big Agriculture, data is the new currency. But, it’s not necessarily your data these agricultural companies are after. In a heated race to get ahead, companies are amassing data on thousands of farms to get the whole story of how crops are raised. The goal? To be the winner in a market that is soon expected to be worth billions of dollars a year.

This Is the Next Space Race
Two of the world’s great superpowers are in an all-out race for global dominance of one type of technology… And Bill’s go-to tech expert, Jeff Brown, reveals the next big trend you won’t hear from the mainstream media. One that’s already pervasive in our everyday lives… and one that most investors are overlooking…

I will keep this short and sweet. To all who want socialism and have more than say $20,000 income, I would like to see them spread their worth to the masses. Prime example is former President Obama. He is worth more now, than when he was in office and he is a socialist? AOC is worth more than I am. I am on Social Security and would be glad to be a recipient of largess from her pocket. Socialists, please put your money in my mouth and not your pockets.

You talk about the funny-money system as if it were the most egregious example of government mandate benefiting the rich at the expense of everyone else. What about the corporate system just in general? A corporation, an organization formed with governmental approval to act as an artificial person. The entire purpose of which is to privatize gain while limiting, and thereby, socializing loss, as evidenced by multiple corporations that go bankrupt, leaving pensioners without their earned retirement monies; and landscapes strewn with abandoned factories, pipelines, and polluted lands.

After reading today’s comments, all I can say is, “They have dumbed down all of America.”

It sounds like you are looking for libertarians. I want law based on the Constitution backed by biblical philosophy. Government that concerns itself in keeping the country safe and a congress that is in session three months a year. He who governs least governs best.

Washington is filled with criminals and traitors. While everyone talks a good game, no one is doing a damn thing. We have people that now openly reject our constitution and the laws of the nation, and no one does anything about it. Some of us put our lives on the line for this country and we don’t have elected officials with the moral fiber, integrity, or the balls to stand up for what’s right. The far left’s position are things that 40 years ago would have put them in jail. Now, in the interests of political correctness, we turn our heads and spend billions and trillions of dollars to out maneuver them. Wake up, America. We are going to revert to armed militias to regain control of this nation. And, that is not right.

And some responses to Friday’s Diary about a ramshackle at Gualfin… should Bill open a “dude ranch”?

About your road that needs to be rebuilt – be like Tom Sawyer – have people pay you so they can have “fun” building the road (open a “dude” ranch).

Bill, if you really need… and want the road, I expect the best way to go about it is, of course, going to require some investment: A used skid steer with several interchangeable implements, a fuel, lubricant tool, and provisions “trap” wagon… A vehicle (sturdy jeep or truck) to tow the above to the start of the construction site… Someone to train the foreman gaucho and a select team of youngins how to operate it all. (Perhaps, bring in a subcontractor with experience.) In the end, crunching the numbers re: cattle heath, weight gain/loss, superior grass/water and improved market price amortized over “x” years will set your thinking right… but you knew that.

The reason we cut the horns off the cattle, with Bolt Cutters, is because that kept them from horning each other. I really enjoy reading your stories of the Ranch. I also like your house restoring in Ireland and France. I’m able to do such also.

Palm Beach Research Group guru Teeka Tiwari and his research team have uncovered a new way you can collect fast cash if the market goes up, sideways, or even crashes… making you money no matter what happens.

To see these payments start hitting your account, read on here. 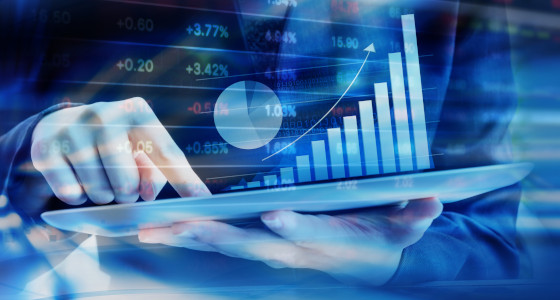