Maria’s Note: Maria Bonaventura here, managing editor of the Diary. In this weekend’s guest edition, Bonner-Denning Letter coauthor Dan Denning shows just how broken the world’s financial system has become… and the best place to put your money to prepare for what’s ahead…

The U.S. Federal Reserve has now become a central bank to the entire world. That’s how broken the world’s financial plumbing is.

A huge surge in demand for U.S. dollars is causing foreigners to sell the only assets they have (stocks, U.S. bonds, and gold) to get those dollars.

Last week, the Fed stepped in again with another fix.

Foreign central banks and other Foreign International Monetary Authorities (FIMA) can now post U.S. Treasuries as collateral to get much-needed U.S. dollars through the “repo market.”

(The repo market is where, typically, banks go for short-term loans.)

The Fed calls this new fix the FIMA repo facility. As many as 170 central banks and foreign monetary authorities would have access to new repo windows.

This is on top of the “dollar swap” lines the Fed already has with five major central banks – the Bank of Canada, Bank of Japan, European Central Bank, Bank of England, and Swiss National Bank… and nine other central banks – Australia, New Zealand, Brazil, Mexico, South Korea, Denmark, Norway, Singapore, and Sweden.

Those other nine were added last month, giving those banks access to $450 billion in liquidity.

Why the demand for dollars?

A lot of the world’s financial system runs on dollars. Foreign corporations issue debt denominated in U.S. dollars. It has to be refinanced or repaid in dollars.

In addition, some foreign central banks may want to add dollars as a reserve asset to their balance sheets. (They do it as a way of managing the value of their own currency in foreign exchange markets.)

Long story short: Financial stresses and volatility have led to more demand for dollars than the Fed could provide.

As a result, there’s been massive selling in the U.S. Treasury market (the most liquid bond market in the world).

But that’s a problem for the Fed. Why?

Treasury selling sends prices down and yields up. (Bond prices and yields move in opposite directions.) That’s the exact opposite of what the Fed wants.

Thus, the Fed has to prevent more selling in the bond market.

Letting foreign central banks and other institutions use Treasury bonds and notes as collateral in the repo market solves both problems. It caps yields on Treasuries, and it puts much-needed dollars in overseas pockets.

It’s also why the Fed added another $625 billion to its balance sheet two weeks ago, buying Treasuries and mortgage-backed securities.

The Fed added more than $1 trillion to its balance sheet in March alone.

As you can see in the chart below, after the Fed added more liquidity this week, the balance sheet is now at more than $6 trillion and counting – or almost 27% of U.S. GDP. It should easily hit $10 trillion by the end of the year. 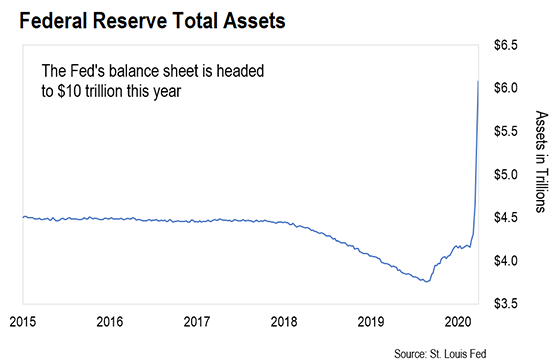 What the Fed’s Moves Mean for Investors

For the stock market, it’s now a case of whether the Fed can defeat the forces of deflation by expanding its balance sheet. We think the Fed will lose the battle but win the war.

That is, with the shocking unemployment figure out this week – over 6.6 million Americans filing for unemployment – stocks, bonds, and even gold may all go down before the Fed can put in measures to pump up prices.

In the August 2019 issue of The Bonner-Denning Letter, we described it as Tokyo first, Buenos Aires later.

In other words, deflation first. Then much higher inflation. From that letter:

In a typical financial crisis, liquidity begins to disappear in the assets at the top of the pyramid. It moves “down” the pyramid toward safety.

The pyramid I’m referring to in that passage is John Exter’s liquidity pyramid. You can see it below. 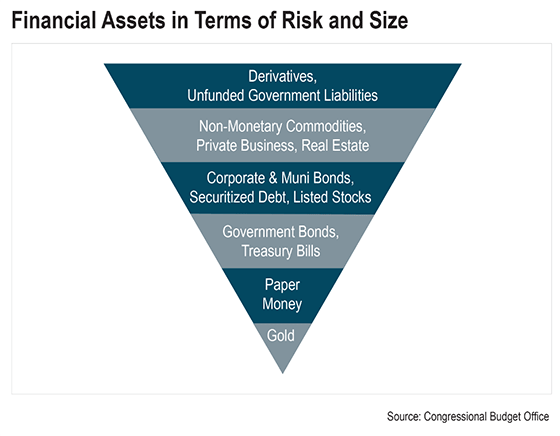 The important point for this discussion is that bonds, cash, and gold are at the bottom of the pyramid. Stocks are right above them, as you can see in the graphic above.

If the deflationary bust continues, liquidity will keep flowing down the pyramid. Stocks and bonds will be traded for cash, then gold.

Gold is at the very bottom of the pyramid for a reason. It’s the apex – or bedrock – of asset quality in the financial system.

The bad news is you may have a hard time getting your hands on physical gold in the market right now. It may get a little easier if central banks and other large players sell gold to raise cash.

In the meantime, we’re biding our time. The selling has longer to go. The money-printing and deficit spending will continue at a breakneck pace.

If Bill, colleague Tom Dyson, and I are correct, this will eventually result in runaway inflation.

At that point, gold mining stocks – the companies that have physical gold in the ground – will become the best performers in the market.

P.S. Bill has been busy in isolation in northwest Argentina. He just finished a detailed review of the political, economic, and monetary consequences of the COVID-19 crisis. It’s called After Armageddon. And it’s a MUST read. If you haven’t yet, read it right here…