YOUGHAL, IRELAND – Yesterday, as predicted by after-hours trading, Facebook lost $122 billion in market value, more than the GDP of 145 of the world’s economies.

The Zuck alone lost nearly as much as Iceland’s annual GDP.

USA Today was on the story:

The massive one-day loss pushed the 34-year-old out of the top 5 in Forbes’ list of the world’s billionaires as he drops from the #4 spot to #6 with a net worth of $67 billion.

Morocco, Venezuela, Ukraine, Ecuador, Angola, Guatemala – none of them have an annual GDP of more than $120 billion. And there are about 140 even smaller economies.

One hundred and twenty billion dollars is enough money to make 120,000 millionaires. That’s more millionaires than you can find in the entire state of Indiana, for example.

Our dots to connect today: What happened to the money? Where did it go? Are there 120,000 ex-millionaires singing the blues?

We will also wonder what it means. Is it the beginning of a trend? In 2000, two big tech giants – Intel and Microsoft – each registered big single-day losses, too… $90 billion and $80 billion, respectively. What followed was a long period of hand-wringing and finger-pointing, with the Nasdaq down 80%.

We’ve been spending less time connecting the dots this week than usual. Instead, we’ve used the sunny afternoons to connect stones.

The top section of the wall on our old barn here in Ireland “fell” down last weekend.

We then found ourselves with a pile of stones on the ground, which we had to levitate, putting them back in place before we could begin framing out the roof. It took us all week to do the masonry work. We’ll do the framing this weekend.

Bill gets to work “levitating stones” with the tractor

With luck, we’ll be ready to put the tin on before we leave on Tuesday.

Back to the subject at hand… the meaning and consequences of Facebook’s big loss.

As you may have guessed, there is more to the story than just Facebook’s own profits and sales. You know already that Facebook is now having a hard time growing; its user growth in America and Canada was flat. In Europe, it declined.

The company projected decelerating revenue for the rest of the year. One analyst called it “nightmare guidance.”

Our young relatives tell us they are reducing the amount of time they spend on Facebook, or giving it up altogether. And as we pointed out yesterday, Facebook is fundamentally in the entertainment business.

It is a diversion… a leisure activity… a way to spend time. The trouble is, there is only so much time to spend. Eventually, you run out of it.

And here we find a convenient metaphor for the entire shebang… of phony money and the fake wealth it produces, in collision with the real world of time, resources, skills, and discipline.

Facebook was worth $630 billion on Wednesday. By the close of business on Thursday, it was only worth $508 billion.

From the time the market opened on Thursday morning to the sounding of the bell at the close, wealth vanished at the rate of about $20 billion per hour. And what about the 120,000 million-dollar fortunes? They must have been obliterated, too. Easy come; easy go.

At 34 times real earnings, Facebook investors were not buying the company for the dividends. The company never paid dividends. And it never could pay enough in dividends to justify the price.

That is true not just of the time-waster Facebook, but of the whole FAANG group. There are only 24 hours in the day. Assuming the number of leisure hours is more or less fixed, the only way people could spend more time on Facebook… or watch more films on Netflix… or spend more time Googling for salacious gossip… would be to spend less time on traditional, old media time-wasters.

But the growth never came from expanding time… it came from taking market share – and advertisers – from other entertainment industries.

No New Era, in other words… just the same old era of dog-eat-dog competition in a slow-growth economy. Advertising spend depends on sales. And sales depend on available income.

Household incomes in the U.S. have barely budged for the entire 21st century. So every dollar the new FAANGs got in advertising revenue had to come from the old entertainment industries.

Net… the economy was no better off. No tech miracle occurred. No hyperdrive for GDP. No boost for employment, wages, or productivity. No pie-in-the-sky… or anywhere else.

But wait… we offer a further annoying reflection.

The FAANGs got a lift from the fake economy in several ways. The companies grew at extraordinary rates (taking market share from others) because they had access to billions in fake money lent at fake rates.

They were able to invest capital to increase sales – or at least traffic – without having to show a profit. Companies could advertise on their platform with fake money, too.

And investors bought their shares at absurdly inflated prices, thanks to the $20 trillion of fake savings pumped into the economy by central banks worldwide, through various quantitative easing programs, since 2000.

Ah yes, that is another noxious fruit of the fake economy – it has given people another way to waste what precious little time they have.

While Team Trump reports the lowest unemployment levels in 50 years, a hundred million people – young people living in their parents’ basements… gig workers with time on their hands between jobs… part-time workers… middle-aged men, turfed out of good-paying jobs in the manufacturing sector – spend their idle hours checking their email, Facebooking their “friends”…

…and waiting for the Next Big Thing in the tech sector that will finally make them rich.

The U.S. housing market is weakening…

That’s the story of today’s chart, which maps the iShares US Home Construction ETF (ITB) – which tracks a basket of 47 U.S. homebuilders and construction-related companies – over the past 12 months. 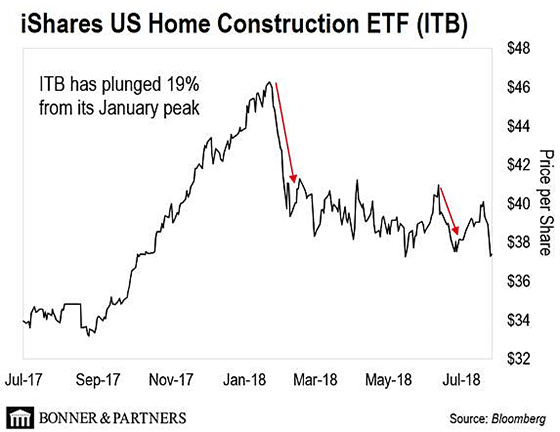 As you can see, ITB has plunged 19% from its January peak of $46. Notice also how ITB sold off hard after the Federal Reserve announced rate hikes in both March and June of this year.

Rising interest rates appear to be having a material impact on demand in the U.S. housing sector.

U.S. home sales fell to an eight-month low in June, and sales forecasts were revised sharply lower. This indicates that the housing market is slowing down, as is demand for new homes… resulting in the sell-off in ITB.

And with the Fed expecting to raise the federal funds rate twice more before 2018 is out, there’s a good chance this trend in housing will continue.

Millennials’ Big Investing Mistake
Millennials – people in their twenties and early thirties – are expected to become the largest generation in the coming years. Unfortunately, many of them are making a costly mistake… one that could cost them their financial independence.

Why Trump Blocked the Biggest Tech Merger in History
In March, President Trump blocked what would have been the largest tech merger in history. The official reasons are classified. But Jeff Brown, Bill’s top technology analyst, think he knows why POTUS took this unprecedented step…

Wages Are Rising… Just Don’t Ask Why
In the decade following the financial crisis, wages around the world have barely budged. The exception is in Europe, where wage growth is picking up. Just don’t ask economists why… They have no idea.

In the mailbag, more talk of Trump… and Russia

Trump is an ignoramus with no knowledge of history or historical context. He gets his information from Fox News, apparently, and the Hannity/Ingraham/Carlson tripartite are living in an alternative universe and dragging a whole slew of gullible and ignorant people with them. Facts are facts, and they are not on Fox News.

While Russia was not the threat it was deemed to be during the Reagan years, it was still vying for geopolitical control and influence. It wanted nothing more than socio-political justification. Still today, it resents our global power and wants to discredit our values, form of governance, and general ‎stance in the world. I cannot believe your blindness these past few days to Trump’s hyperbolic, contradictory stance to everything that America has built over the last 60 years.

The institutions of freedom, justice, and classical liberal economics are all disregarded by a narcissistic, self-serving fool who admires “strong men” with childish adoration and is being played by dictators, despots, and rising global powers – who want nothing more than to see America’s dominance, influence, and power on the world stage diminished.

I am neither a U.S. voter nor a Russian voter, but in a run-off between Trump and Clinton, I would have voted for Trump in a swing state and for Jill Stein in a marginal state – as Ron Paul was no longer a choice. If those were three mail-order brides, I would remain single.

Putin would get my vote in Russia because he acts in Russia’s interests. He has the mafia to contend with; Trump has the Deep State. The world is very far from a world I would enjoy living in; but if I had to vote, I would choose Putin and Trump.

Remember Plato’s “aristocracy, timocracy, oligarchy, democracy, and tyranny”? Russia is progressing from oligarchy toward democracy. The U.S. and UK are exiting democracy, heading straight toward tyranny – not something anyone in either strident mainstream camp wants to hear right now. It is music to billionaire, totalitarian ears, however.

Thank you for your many insightful comments on the Trump phenomenon! The different viewpoints (love him or hate him) are illustrative of how the two factions employ their versions of their mental models concerning what’s going on politically. To that end, I’ve written a paper describing how we use mental models, starting with the simplest ones that we can pretty much all agree on. The more complicated political models are subject to propaganda and fake news.

Reader John W. says, “Trump can change his mind in an instant, and back again the next minute. That’s what we respect about him.” That is what many of us fear about the man. He seems to have no real principles, except what seems good for him in the moment… and that is always changing. A five-year-old child thinks much the same way. Of course, most politicians have a bit of that quality, but he seems to carry it to an extreme.

The trade war continues to dominate headlines. But behind the scenes, Trump is waging another war with China… and America is losing.

Now, leaked White House documents suggest that Trump is pulling out all the stops to fight off this threat to our country. Bill’s top tech expert, Jeff Brown, has all the details in this brief video presentation. 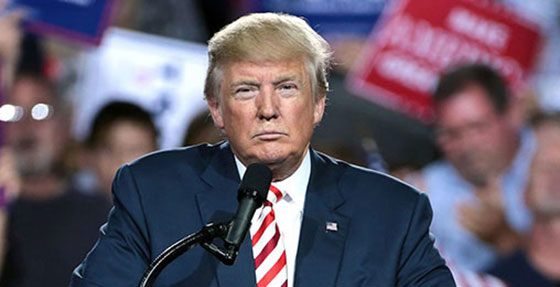