GUALFIN, ARGENTINA – We live in an age of miracles, to be sure. Even here in the remote Andes, we can turn on our laptop computer and get messages from all over the world – with photos!

If we wanted, we could even tune into reruns of Stormy Daniels’ Sunday interview or watch one of her many charming movies.

We can get in our air-conditioned truck and drive, too, without having to worry about wind or weather… and, after a couple of hours, pull into a decent restaurant where they serve fish brought all the way from the Pacific Ocean.

And here’s a miracle for you. For thousands of years, the best price was discovered by willing buyers and sellers. It was messy. It was unpredictable. And they always got it wrong, because they changed their minds by the minute.

Well… now, a group of academic economists thousands of miles away has come up with a better way.

When stock prices plunged in January 2000, for example, they knew that those prices were incorrect – or at least, unwelcome. So they went to work to change them.

Then again, in 2008–2009, they knew better than all the world’s stock analysts, traders, and investors… They knew that stocks should be trading at higher prices. And within a few months… they were!

And now, they know – to two decimal points – how much borrowers should pay for funds.

They’ve got a whole program underway designed to raise interest rates. By the end of the year, they’ll be dumping bonds at a rate of $600 billion per year – to get prevailing yields back to where they know they ought to be.

They know, too, how much consumer prices should move… and in what direction.

And along comes the Trump Team, piling on more miracles. How is it possible for a reality TV star, aided and abetted by a crackpot economist (Navarro) and a vulture investor (Ross), to know where Americans should buy their steel – Canada, okay… China, no – and how much they should pay for it?

Back in the old days, buyers and sellers would be stuck making the best deal they could. But now, in come the geniuses… offering a better deal. At least, better for someone.

And how about the people who buy cars and trucks?

In the bad old days, they just had to work it out themselves. The buyer would look for the best available deal… and take it.

But in come the miracle workers. Forbes reports on the Trump administration’s trade deal with South Korea:

The actual deal has not been released, but per reports:

Over thousands of years of experience, people learned that they can’t do better than old-fashioned win-win deals. But that was before the Age of Miracles. Now, we have a better deal.

Neither the theory nor the practical evidence of this has yet been offered to us… but that’s what makes this so miraculous.

But that’s the thing about miracles… like the Virgin Birth or the Mets’ 1969 victory over the Baltimore Orioles, they don’t have to make any sense.

We should add the latest “ominous” federal budget to the list of miracles, too.

For generations, people believed that the best government was one that governed modestly, that did not spend money it did not have… and that benefited from the two-party system.

Each party served to restrain the other, forcing each other to compromise… to make concessions… to cut out unnecessary programs and justify spending the public’s money.

But now… we have another big step forward for mankind. Now, in Washington, we have what is effectively a one-party system: the Deep State Party.

The latest “ominous” spending bill includes big increases for both parties’ boondoggles. As near as we can tell, there was not a single program so goofy and so woebegone that it did not find favor in the eyes of Republicans, Democrats, insiders, the elite, the Deep State, and Mr. Trump.

Even the agencies that Trump promised to cut are still there… and getting more money!

We turned to our trusty research chief, Joe Withrow, for evidence:

A list of the most ridiculous and wasteful government programs is put out every year, usually by one of the senators from Oklahoma. They call it the federal “Wastebook.”

Here are some ridiculous items to get you started from the 2017 “Wastebook.”

Cut Some of This Grease

The spending bill was 2,300 pages long. Naturally, it was written by lobbyists, careerists, insiders, and elite carpetbaggers. We doubt that a single member of Congress – and certainly not Donald J. Trump – read it.

As for the president, this is a miraculous turnaround. He campaigned on a “drain the swamp” platform… We doubt that he really meant a word of it.

Still, it is remarkable that he didn’t at least veto the measure… and toss it back to Congress.

“Cut some of this grease,” he might have explained in a tweet. “Balance the damned budget. It’s YOUR JOB!!!.” He would have been a hero – at least, to us.

Instead, when chief-of-staff Kelly reminded him that if he vetoed the bill, he would have to give up his golf weekend at Mar-a-Lago, he may have replied:

“Aw… the hell with it; deficits don’t matter.” And signed.

Paris was worth a mass to Henry IV, who converted to Catholicism to take the crown of France. America’s solvency, apparently, is no longer worth 18 holes of golf.

That must count as some sort of miracle, too.

The president signed a 2,300-page, $1.3 trillion spending bill that he had threatened to veto on Twitter several hours earlier. He called the bill “ridiculous,” but said signing it was necessary to fund the government (our military) and avert a shutdown.

Even if he gets the Army Corps of Engineers to use some of the $700 billion in defense spending to build a wall on the Mexican border, the spending bill is a betrayal of exactly the mission his voters sent him to Washington to accomplish. He let Nancy Pelosi, Chuck Schumer, Mitch McConnell, and Paul Ryan win.

He was somehow convinced that there was no other option but to sign the spending bill (which included a $200 million funding INCREASE for the IRS, ostensibly to make it simpler to fill out the tax forms required under the new law).

Or maybe after a year and a half of being immersed in the swamp, Trump agrees with the Congress critters.

But the politics are not the issue here. The issue is the debt.

The feds have racked up another $1 trillion in debt in the last six months. The United States now has a total debt of over $21 trillion.

And as you can see from the chart below, the interest payments on federal debt have nearly doubled from 2008 to now. 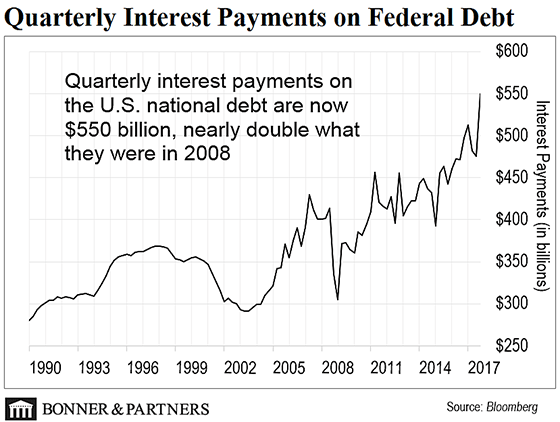 The United States government spends more than half a trillion dollars paying interest on money it borrowed and spent long ago.

This is unforgivable if you’re a fiscal conservative or believe in sound money. The markets will focus on the 10-year Treasury yield, with the belief that, when yields move over 3%, it will spell trouble for the bond market.

You should also keep an eye on credit spreads. When it becomes more expensive for higher-risk corporate borrowers to borrow, the credit markets are telling you that the end of the bull is near.

But by refusing to veto the omnibus spending bill – which would have forced Congress to override it and “own” the result – the president proved to his base that Washington is fundamentally unreformable. The swamp can’t be drained. He is powerless, and so are the American people who sent him there.

P.S. If the events of the last few months prove anything, it’s that Washington is beyond saving. And that makes it vulnerable to attack.

You may not believe it, but I believe a group of unelected D.C. insiders may be planning to seize control of the country’s most important resource: its money. You may find my conclusions controversial. But read the whole story right here… and decide for yourself.

How to Win a Trade War
President Trump famously tweeted that winning trade wars is “easy.” But is it? Here’s a breakdown of what it would take to win a trade war.

Trump’s Next Target?
President Trump has gotten tough on foreign trade. But the president may soon turn his attention to an American company. Could this business be Trump’s next target?

What Will Trigger the Next Crash
U.S. stocks are on a shaky footing. And Dan Denning, Bill’s coauthor on The Bill Bonner Letter, says things will only get worse. Here’s why.

In the mailbag, Bill’s story from the abandoned valley has gotten readers thinking…

I love your narratives; keep up the good work.

Hello from up in Vancouver, Canada. Thank you for your thoughtful and heartwarming essay today. You are the best.

How do we prepare for all this? One reader posits a dreadful reckoning for humanity in an overpopulated, overdeveloped Earth. If his dystopian, dysfunctional vision obtains, his best preparations might very well be to come to grips with the nature of mortality. One might recall this scene from Goldfinger (1964): As the laser beam approached James Bond, he inquired of Mr. Goldfinger whether the latter expected the former to “talk.” Mr. Goldfinger answered, “No, Mr. Bond, I expect you to die.”

But you want the bubbles to burst! It’s your biggest dream! For if they don’t, you look like an old fool or a very early boy-crying-wolf again. By the way, did you see the interview of Jason Zander, the corporate vice president of Microsoft, on CNBC today? Amazing. Basically, Silicon Valley realizes they created a monster they can’t control, which warped billions and endangered governments, and there is a huge realization going on that it was a huge mistake.

Just because science and technology make something possible doesn’t mean it should happen. In the middle of the 20th century, there was a development called solovox. Or was it sonovox? I don’t remember exactly. Anyhow, pressing a transducer against the throat of a vocalist, who mouthed the words of a song without using his or her own voice, produced the words as if sung by the transduced sound. With great fanfare, a movie featuring Kay Kyser’s orchestra climaxed with the orchestra “singing” the song “I’d Know You Anywhere.”

There was a Chicago radio advertisement in the 1940s: an electronic organ “singing” to the tune of the Strauss waltz “Artist’s Life” with the “words,” “Drink Edelweiss, it tastes so nice.” More recently, did a rock group do something with singing instruments? Apparently, these all got the reaction: OK, that’s cute, but I don’t care to spend any more time listening to it.

But while most traders have given up on bitcoin, Teeka Tiwari believes it’s just getting started. See why here. 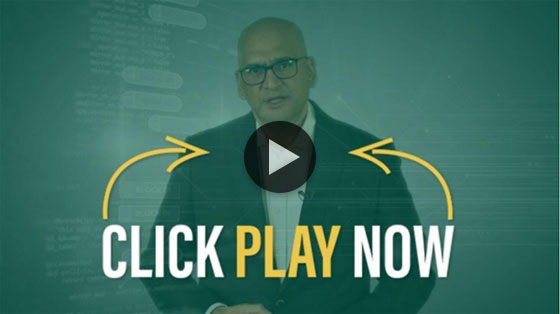