With global markets taking a coronavirus beating, you may be wondering just how low stocks can go. In this special excerpt from our February issue of the Letter, Dan shows why the worst is yet to come for the broad stock market… and where you can look to put your money instead…

A month ago, it seemed like a dead-set certainty that the Dow would hit 30,000 sometime in the first quarter. But now, I’m not so sure. Why?

Well, first, Bill and I have shown how the market has been divorced from fundamental measures of value for a long time. The S&P 500 trades at 2.4 times sales, for example. At 30.63, the CAPE Shiller P/E – a common valuation metric – is higher now than it was before Black Thursday in 1929.

And even the market-cap-to-GDP ratio (Warren Buffett’s favorite way to gauge whether the stock market is over or undervalued) stands at a high 156.7%. By comparison, the ratio was 136.9% before the market crashed in 2000.

All of these metrics are financial “pre-incident indicators” that something isn’t right. That danger is severe and most likely imminent. It was only the radical intervention of the Fed beginning in 2009 that prevented the kind of mean-reverting crash we’ve been looking for.

And based on the chart below, it’s going to take something equally radical now to prevent a bear market and a recession. 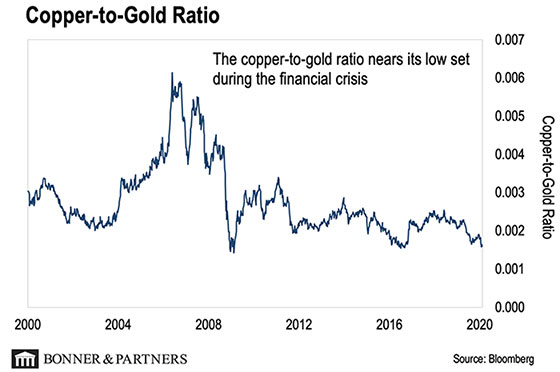 The chart above shows you the world is more worried about a depression and a stock market crash than at any time since the dark days of 2009.

On the one hand, I can see how some people might view that as a great reason to be optimistic. I have smart colleagues who believe we are on the verge of a last final “melt up” in stocks. I have smart trader friends who think you should buy big dips like we just saw on the Dow.

These are smart people. They believe that pessimism is overdone. That you should be greedy when others are fearful. But I respectfully disagree with them. Why?

The chart is the copper price divided by the gold price. Or, in simpler terms, it’s greed divided by fear. When the ratio is high, greed is winning. When it’s low, fear is on top.

That may sound simplistic. But copper – sometimes referred to as “Dr. Copper” by traders – has always been a proxy for growth. Builders use it for electricity and plumbing. When an economy grows, copper booms. Copper is optimism. And at its extreme, optimism turns to greed.

Conversely, gold isn’t an industrial metal. It’s a monetary metal. It’s a reserve asset for bankers. It’s real money. Gold is a teetotaler. It’s the designated driver who gets you home safely when the punch bowl has been smashed to pieces.

When the demand for safety goes up, the price of gold goes up (or the dollar goes down in gold terms). And that’s exactly what we’re seeing now. Gold is on the rise to new highs in every currency except (for now) the dollar, the renminbi, the yen, and the Swiss franc. Copper has fallen out of bed onto the floor, flat on its face. A drooling mess.

Put the two together, and you’ve got the chart above. It’s exactly what you’d expect during the first reaction to a global pandemic.

That said, is the chart telling you the worst is over? Or that the worst is to come unless there’s a major intervention from the monetary and fiscal authorities? I’m going with the latter. Here’s why…

Companies and CEOs are going to use the coronavirus as an excuse to warn on earnings and revise downwards. It’s a tailor-made excuse. Too good to pass up for stocks that are trading well ahead of earnings. And now you have a rock-solid case for explaining a decline in earnings to investors and Wall Street.

The 30-Year Treasury yield went under 2% for the first time ever in February. The bond market is telling you that it prefers safety and liquidity over momentum and growth. It’s telling you that absent something extraordinary from the Fed or the Treasury, you’re going to get a recession.

That “something extraordinary” could be huge fiscal stimulus. The U.S. government is already running annual deficits of over $1 trillion. And as Tom pointed out recently in his Postcards From the Fringe e-letter (read that issue here), the feds are dusting off their playbook from the 1940s to run a policy of “curve control.” That’s when you cap interest rates on government bonds because you know you’re going to borrow huge amounts in the near future.

Back in the 1940s, the borrowing was for the war effort to defeat Nazi Germany and the Empire of Japan. What’s it for today? On the deficit side, to pay for the American Empire. And to fund the huge entitlement obligations owed to the retiring Baby Boomers.

On the quantitative easing (QE) side, the Fed will buy Treasuries to keep the financial system liquid and the stock market high. As Warren Buffett recently quipped, why would you buy bonds with nominal yields under 2% when the central bank has a stated inflation target of OVER 2%? You’d have to be stupid. Or high.

Gold knows all this. That’s why it’s broken out. It will soon make a new high in U.S. dollar terms, notwithstanding the attempts to suppress the price in the paper futures market.

And do be aware that no matter how strong the case for gold is, it won’t move up in a straight line. There will be some chop. But look for it to make new highs in yen and renminbi, too. The more “stimulus” the bankers promise, the more valuable real money will be.

Don’t Try to Chase a Melt-Up

Of course, the coronavirus isn’t responsible for any of these underlying conditions in the financial markets. The stock market was already overpriced. Bond yields were already low. And gold was already breaking out. It has simply picked up speed now.

That’s why Bill, Tom, and I believe you shouldn’t chase a possible melt up in stocks. Don’t be the dog that catches the bumper of a passing car between your teeth.

But can you become a “meltdown millionaire”? The answer to that is yes. It’s going to take a lot of leverage and much higher gold prices. But this may be the best time in the last 20 years to make a bet on gold mining stocks, especially the juniors.

In the meantime, it’s certainly possible that a quick resolution to the coronavirus – say with the introduction of a vaccine from a pharmaceutical company – could lead to a huge relief rally. Maybe even Dow 30,000, like I expected by now. But it’s far more likely that markets are headed down from here and that gold is headed up.

P.S. Even if we manage to dodge a bullet this time and avoid a real pandemic, this episode should serve as a warning. Complex global systems are fragile and vulnerable to disruption. And you need to make sure your portfolio is prepared.

If you’re a Bonner-Denning Letter subscriber, you can start by reviewing our strategy for reducing risk through asset allocation. You can never eliminate risk from your calculations. But diversification is a good start. In our latest asset allocation guide, we break down the five asset classes we believe belong in every investor’s portfolio today… what percentage to devote to each… and why.

If you don’t have a subscription to The Bonner-Denning Letter yet, read on here. I explain why it’s not too late to protect, and even grow, your wealth in the bigger crisis Bill and I see coming.