When the mob turns against the rich, some of the rich put on rags and join them.

The granddaughter of Roy Disney, co-founder of The Walt Disney Co. with brother Walt Disney, said [last] Thursday on CNBC’s “Squawk Box ” that she thinks “CEOs in general are paid far too much.”

“The problem is that there’s a systematic favoring of people who have accumulated an enormous amount of wealth,” she said.

We’ve never met a CEO who was worth even 10 times his median worker’s pay. Then, again, we never met Jesus Christ.

But if owners want to pay their CEOs even 1,000 times what they pay their median worker, it’s none of our business.

But wait… what if the money itself has been fiddled? If a corporate CEO can borrow at near-zero real cost… why not pay himself millions… and bribe the shareholders too, by buying back their shares and goosing up the stock price?

It is a wicked world, Dear Reader. And wickedness takes on many shapes and disguises.

And now, in one of the most elegant and subtle scams in history, the elite (pseudo-capitalists) get the gains, while the losses are put onto the backs of the working classes – either in the form of a depreciated currency (as losses are monetized by the Fed), or in the form of the national debt (in which they are socialized by the federal government).

But whoa… that’s a lot to take in.

So, go at it step by step, as if we were dissecting a dead Democrat or a live Republican.

Yesterday, we were connecting the thigh bone of anti-capitalism to the leg bone of a corrupt U.S. financial system.

You’ll recall that anger against the rich seems to be rising. You’ll remember too that the mob believes there’s something wrong with “capitalism”… that it is to blame for the wide gap between rich and poor.

Ms. AOC, for example, said income “inequality” was caused by capitalism and said the system was “irredeemable.”

But let’s get out our scalpel and take a look. Maybe we will see how this thing really works.

To simplify, there are only two ways to do things. Either voluntarily, by win-win deals… or involuntarily, by telling others what to do. Capitalism only makes sense as a voluntary, win-win system.

Socialism is different. An elite decides who gets what, by imposing win-lose deals – price-fixing, involuntary employment, tariffs, taxes, regulations – at the point of a gun.

Of course, there is no such thing as pure capitalism or pure socialism… Even in a communist system, people generally try to get along and go along, making whatever black-market deals they can get away with.

Over time, either the rulers loosen up so more win-win deals can take place (China)… or the system tends to fall behind (North Korea) and eventually, falls apart.

Since we live in what is basically a capitalist system, we will turn our knife to our own sclerotic arteries and calcified joints – to see what has happened…

In a free, capitalist system, poor and middle-income people sell their time. That’s all they have.

Then, if they manage their finances prudently, they accumulate savings and eventually have enough capital to retire comfortably… perhaps passing the house and the family silver on to the next generation.

The rich, typically, have capital – either inherited or earned – in the form of stocks, bonds, or real estate. This capital is often a bigger source of income than their time.

Even those without much capital of their own can get in on the action. They get jobs as managers – CEOs, for example – and benefit from performance-related compensation, far beyond the actual value of their time.

A young man, right out of law school, for example, may help put together a merger or an acquisition… or paper over a share-buyback scheme… and earn a windfall.

That’s why, for more than 20 years, every mother’s son has been urged to go neither into manufacturing, nor sales, nor mining, nor law, nor agriculture – but to Wall Street. Why? That’s where the money was!

Is there anything wrong with that? Nope. It’s just capitalism in action.

But what if the feds had queered the whole thing by introducing a new kind of money that wasn’t real capital? A money that represented no savings, no invention, no output, no labor, no profit, no forbearance, no sweat, no innovation, and no real increases in GDP?

And what if, when the markets tried to correct the outrageous asset prices… in 2000, and again in 2008… the feds simply added more fake money, and turned Wall Street into a “heads I win… tails you lose” deal… a win-lose deal, where the capitalist insiders won big and the working stiffs were left with $13 trillion more in debt?

…but we’re not finished. The autopsy continues… tomorrow.

That’s the story of today’s chart, which tracks the CPI-adjusted growth in annual wages for the average worker and the top 1% of wage-earners, compared to productivity gains (the output of goods and services in the American economy). 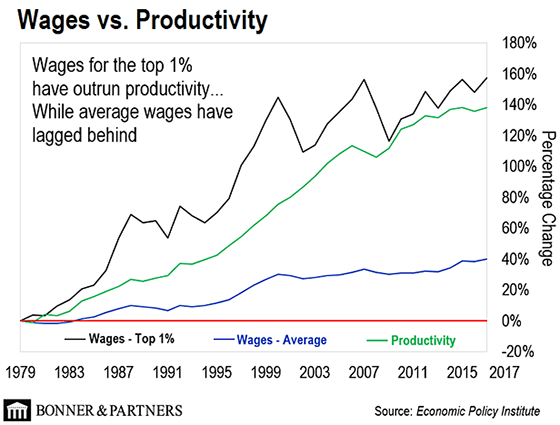 As you can see, productivity in America has grown 138% over the past 40 years. And the wages of the wealthiest Americans have consistently kept pace and exceeded that growth. Wages for the top 1% are up 157% over that time.

Meanwhile, average wages have been left behind. The average worker saw his pay increase only 40% since 1979. And that’s adjusting wages for inflation based on the Consumer Price Index (CPI)… Which understates inflation, as Bill has said before.

This chart tells the story. The top 1% of wage-earners have participated fully in the massive productivity gains we have seen… But the average worker has not.

This wasn’t always the case. From 1948 to 1973, average wage growth kept pace with productivity growth. But now, that’s all changed.

The funny money system that Bill has been reiterating every day for years now.

By creating trillions of dollars from nothing to spend on crony projects, the feds (and the Fed) transferred those productivity gains from middle America to The Swamp.

It is no coincidence that five of the eight richest counties in the country are within an hour’s drive from Washington, D.C. – where the federal government is the largest employer. These counties are the beneficiaries of the funny money system.

And that means the people who receive the newly created dollars first get to spend them before the dollar’s purchasing power falls. That is how wage growth for the top 1% outran productivity.

And that is why there is no political solution to so-called “wealth inequality.” Raising the minimum wage… implementing a universal basic income… giving people free college or medical care… None of those things address the root problem: the fake money system.

The Socialism vs. Capitalism Debate Heats Up
Socialism and capitalism seem to be the current buzzwords of the political talking heads. And a recent poll reveals some 56% of Democrats said they would be “satisfied” with a presidential candidate “who thinks the country should be more socialist.” What has caused this increase in fascination with socialism? It could have something to do with the Great Recession of 2008…

Will Digital Privacy Be What Erases Party Lines?
Party lines in the U.S. are set in stone. And as Bill has said, our most disastrous human programing is that idea of “us vs. them.” But, with Big Tech companies like Facebook and Google guzzling up consumers’ personal data, it seems both Democrats and Republicans may finally agree on something… this train needs to be stopped.

This Is the First Serious Threat to the iPhone…
Consumers are holding onto their smartphones longer… the newer models simply aren’t innovative enough to compel consumers to run out and buy them. Not to mention, they’re expensive. Bill’s go-to tech expert, Jeff Brown, shows why the “something big” we’ve been waiting for in the smartphone world is finally here… and why that spells trouble for Apple’s iPhone.

Your points are pretty much on target, señor. But “crony” capitalism is “irredeemable.” Not that AOC has the answers. But Modern Monetary Theory is simply a response to the ghoulish spectacle of quantitative easing and its sick relations that printing money does not cause inflation. So why not $60 trillion more to benefit the “people,” instead of the 1% crowd? Of course, there will be inflation (serious) at some point, but the internal logic is not inherently wrong and the theft from the people is palpable.

Capitalism, as you would like to see it, is dead and probably always has been. People are corrupt to the core and the psychopaths always rise to the top, so no decent system could ever work. Win-win, as you like to envision it, rarely (if ever) works on a large political and social level for that reason.

The wealthy need to be taxed fairly, not given tax breaks that they only pass on to themselves. It never even trickles down, which is a very low expectation as it is. Eisenhower taxed them 90%. I think she is saying 70%. Keep property taxes low and tax the wealthy at least 50%.

I’m a hard core conservative but I think a 1% tax on all financial transactions would be a painless way to raise revenue. We have to do something about the $22 trillion debt. It’s the most important problem we face.

There’s no freedom. The government does what it takes to screw the poor.

Dear Bill… The breadth and depth of your thinking are appreciated, but the judgments you are making need a little guidance. Specifically, AOC proposed a non-binding resolution to get people of your abilities to start focusing on this subject. The good news is: mission accomplished! The bad news is that treating her vision statement as a platform, rather than an inspiration to give the subject some mental horsepower, merely demonstrates that the Republican party’s efforts to distract from the big issues are working. The shenanigans of the tea spillers and the narcissistic stupidity in the administration are all being employed to distract from the criminal negligence, or worse… that they are indulging in.

I cannot take AOC seriously. I believe she is a front or just a smokescreen to get her on the front pages and TV, and brush over the other nasty stuff evolving around the Democratic National Committee.

What’s going to happen to us people that only live on $750 a month because they lowered our Social Security so much?

This insider worked within the belly of Wall Street for 16 years, placing trades for the richest institutions in the world…

But, he came across a little-known “loophole” that allows him to see what Wall Street’s biggest titans are buying. 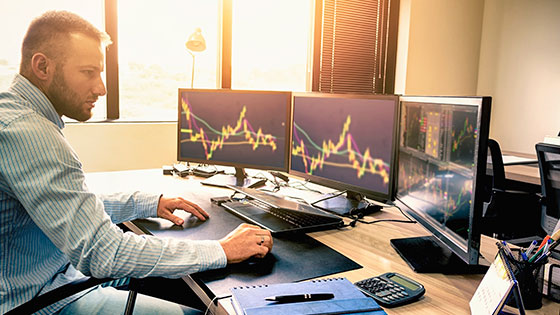