POITOU, FRANCE – Today, we will look at a handful of dots.

You’ll have to connect them yourself.

First, we went to a lawn party yesterday. It took place in a little village about 20 minutes away, where two couples each celebrated 50 years of marriage.

Towns in this area were built on hilltops, surrounding a castle. Often, the castles were later demolished so the villagers couldn’t protect themselves from the royal army.

But this château still stood, looking out over the countryside like a lonely, old sentry who never learned that the war was over.

Near the castle were the remains of a louveterie – a place where wolfhounds were kept.

According to researchers, wolves killed more than 7,000 people in France since the 1300s. And according to local legend, the last wolf in France was killed near here, early in the 20th century.

Naturally, the conversation at the party turned towards Le Roi des Loups himself, Donald J. Trump. As Americans abroad, we are expected to have an insight… or at least an opinion.

“I don’t know what to make of him,” said a local doctor. “But I think overall, so far, he’s been good. Not intentionally, perhaps. But he calls into question things that should have been questioned years ago.

“Such as: What are U.S. troops still doing in Europe? Why shouldn’t Germany buy gas from Russia? And why should Europeans spend more money to defend themselves against Russia, which has only a tiny economy and poses no real threat of invasion? America might be a much bigger threat. Homo homini lupus.”

“Man is wolf to another man.”

But “saving face” is a big deal in China. And the Chinese – in our experience (we have an office in Beijing) – are even more jingoistic dumbbells than Americans.

When it comes down to an “us versus them” trade fight… we would put our money on the Chinese.

Real trade barriers between the two countries have been coming down for years… and would probably continue to come down if left alone. So the trade war between the U.S. and China may be just a silly political stunt.

But stunts go wrong from time to time.

The Chinese and American economies are mutually dependent… and both depend on fake money lent at fake rates. Today, commercial and financial transactions between China and America represent about a third of the entire world’s GDP.

Over the last 30 years, investment in China has increased 50 times. Nobody, nowhere, no how could invest all that money wisely. Instead, the Chinese overdid it, and now have excess capacity in a whole range of industries… and empty cities all over the country.

A major shock to U.S.-China trade might cause the Chinese economy to tumble first… sucking the U.S. and the whole world down into a depression with it.

Brett Kavanaugh seems like a safe choice. He’s not an extremist. He’s Catholic, but not a religious zealot. He’s a “conservative,” but not too particular about what is conserved. All in all, he seems like a reasonable, decent human being.

Why, then, would Donald J. Trump recommend him for the Supreme Court?

Our hypothesis is that Trump has no personal regard for the Constitution… nor does he care about Roe v. Wade.

What he does care about is the power of the office he now inhabits; he doesn’t want anyone on the court who might get in his way.

Further fleshing out our hypothesis: The Deep State runs the country. But the Deep State has competing factions, with different ideas about how to divvy up the spoils.

Mr. Trump champions one faction and embarrasses another. But his main achievements – bigger budgets, bigger deficits, more wars – always find favor in the eyes of the Deep State itself.

Big Data is becoming a big tool for the Deep State to manage, modify, and manipulate the public.

If we’re right, it is teaming up with Google, Facebook, and Amazon to gather data… and use it to identify and marginalize troublemakers.

The HuffPost has the answer:

In 2015, Kavanaugh wrote a concurring opinion with the U.S. Court of Appeals for the D.C. Circuit affirming the constitutionality of the National Security Agency’s warrantless phone records collection program. The controversial program had been revealed in 2013 with the help of Edward Snowden, a former intelligence contractor who had leaked classified documents about the government’s surveillance of the American public to the press. The NSA, it turns out, had for years been secretly collecting telephone metadata – allowing the government to see whom a person calls, but not what was said – from major American phone companies.

Kavanaugh wrote at the time that he felt that the “critical national security need outweighs the impact on privacy” and joined other judges on the court in declining to rehear a case challenging the program under Fourth Amendment grounds.

Brett Kavanaugh is a Deep State guy… of, by, and for the Swamp.

Our final dot: What’s going on in Nicaragua?

Regular readers know that we have property on the Nicaraguan coast. So we tend to keep an eye on developments in the country.

News reports tell us that 100 people have been killed, mostly on the streets of the capital city, Managua. Protestors want to get rid of Daniel Ortega and his wife, the president and vice president, respectively.

His supporters – including, apparently, Deep State paramilitary units – attack the protestors. And criminals and cutthroats may be using the unrest as cover for robberies and murders of their own.

How far this will go is anyone’s guess. But things go wrong.

Often, reform movements begin with reasonable objectives. Then, they come under the spell of the most ruthless and radical of the reformers.

Like Donald Trump’s trade war, the protests in Nicaragua could turn into something much more lethal.

For now, our sources at Rancho Santana – the Pacific resort we helped start 20 years ago – tell us that the sun is shining, the surf is up, and people are calm.

Yet it’s quiet, with few visitors from North America. With luck, the problems in Managua will sort themselves out… and life will go back to its normal, pleasant pace.

As Bill reported on Wednesday, the big technology companies are firmly in control of the market. Today’s chart puts that into perspective…

That’s the story today, as we chart the contributions of those six stocks to the S&P 500’s year-to-date performance. 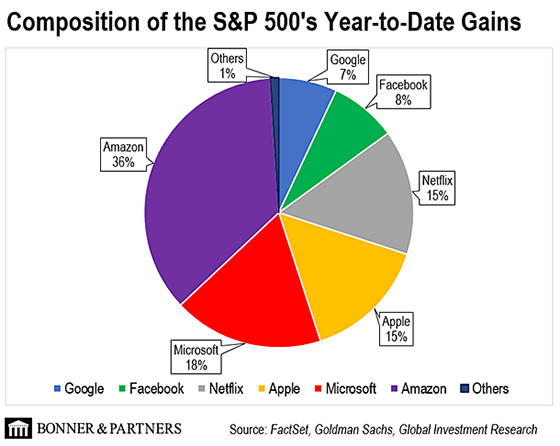 As you can see, Facebook, Apple, Amazon, Netflix, and Google’s parent company Alphabet – the FAANG stocks – plus Microsoft account for nearly all of the S&P 500’s gains in 2018.

The big technology companies can make up the bulk of the year-to-date gains because the S&P 500 is a cap-weighted index. That means that gains from companies with a larger market cap, such as the FAANG stocks, contribute a greater share of the gains for the overall index.

Amazon alone constitutes 36% of the S&P’s year-to-date performance… followed by Microsoft with 18%… Apple and Netflix with 15% each… Facebook with 8%… and Google contributing 7% toward the S&P’s gain.

One concern is that since the big techs contribute the largest share of gains to the index, they would also drag the S&P down if there was ever a major drawdown in these stocks.

That means anybody with exposure to U.S. stocks would be impacted in the event of a tech sell-off.

Titans of Junk
Global markets have been “binging on debt.” It’s estimated that corporations have borrowed some $11 trillion over the last decade. It’s led to a global equity market that is addicted to debt… and vulnerable to withdrawals.

Was Bitcoin Manipulated?
A recent article from The Wall Street Journal claims that bitcoin’s meteoric rise in 2017 was partly due to financial manipulation. But renowned cryptocurrency expert Teeka Tiwari shows what the papers failed to report…

Hedge Funds Should Be Thriving… But They’re Not
Actively managed hedge funds are supposed to thrive in times of heightened volatility, when the broader stock market can’t be relied on to consistently climb higher. In 2018, volatility is back, but hedge funds are not. Here’s why.

I’m disappointed in you! Our economy is really rolling. Our president – a billionaire – gave it up, and now, trust in the Lord, our country is profiting from it. I’m an 82-year-old, average American living very comfortably, even on Social Security. I’m totally out of debt, just bought another piece of property, and sold out. I’m trusting in the Lord God, who saved my soul from hell after I crashed a plane in the Sierra Madre in old Mexico.

I know of your success in life, your ranch in Argentina, and all your other riches, but you can’t take it with you. I think a lot of you, and I’m on the same level – nowhere close to your riches, but that doesn’t bother me. God bless!

Gosh, Bill, you should have been president. Then everything would just be perfect.

Meanwhile, the composition of America’s Deep State comes under question…

Hillary? Rudy? Elizabeth Warren? But I see no mention, much less applied criticism and implication, of the president who is riding, if not driving, this algorithmic tsunami.

And which party has been controlling the cameras, the IRS, the FBI, and the Justice Department for the last eight years? And still, many of their cronies are in positions of great power. I don’t think many of them are Republicans. Trump is trying to get them out, and they are fighting like cornered bobcats. You refer to Trump as an idiot; it seems to me he’s doing his best to shake up the Deep State. But I can see you’re not helping.

I definitely have a love-hate relationship with the Diary and with you, Bill. I agree with just about everything you tell us, but then get so damn depressed because you are right. What the hell happened to this country that I used to think was the best? If we were able to take greed, in all of its forms, out of the equation, then maybe we would have a country that is worthy of our faithfulness and pride once again.

Back to you, Mr. Bonner. Thank you for at least making anyone that cares aware of the sewers of morality that our elected officials are more than willing to dig down to. May they gorge themselves to death…