BALTIMORE – Bitcoin blew by another milestone.

This morning, the world’s first cryptocurrency hit a new record of $9,680.

It started off the year trading at just $997.

“I can’t believe what happened,” said a friend.

“I bought $1,000 worth in 2012. Bitcoin was trading at about $8 at the time. Then one of the big cryptocurrency exchanges, Mt. Gox, was hacked and almost $500 million worth of bitcoin was stolen. I got out.

“If I had just held onto my stake, it would have been worth more than $1.2 million today.”

You hear stories like that all the time now. They are bull market stories. The hero regrets having sold too early.

Later on come the bear market stories when he regrets having sold too late.

But let’s enjoy the bull stories now… while we can.

The typical story has its hero… and its villain. The hero bought bitcoin when everyone told him not to. Now he’s regarded as a genius. Even his father-in-law is asking his opinion on everything from politics to cocktail recipes.

From what we can tell, bitcoin is headed to the moon. Or to Hell.

Weightless… frictionless… why not?

Bitcoin is a perfect “investment” for the fake-money era. Lighter than air. Not here; not there. Neither animal, vegetable, nor mineral.

Immaterial. Implausible. Imponderable. And immeasurable. There is nothing to hold it back.

Almost all assets are overpriced or fraudulent – usually both. Something was bound to soar to the top of this gassy heap. Why not bitcoin?

Stocks have been bid up to the sky by fake money from central banks.

Management teams took the Fed’s super-low-interest-rate loans and pretended to be investors – buying back and canceling shares in the corporations they run to boost earnings per share.

Unbelievably, the only net buyer of U.S. stocks since 2009 has been corporations themselves!

Earnings were faked, too, using “non-GAAP” adjustments to make it look like they were more profitable than they really were.

The third quarter of this year may have set a new record. Of the 30 Dow companies, 14 reported “adjusted” earnings, rather than using the old-fashioned Generally Accepted Accounting Principles (GAAP).

And those 14 companies reported adjusted income 26% higher than the GAAP numbers would have shown.

One case, drug maker Merck, stands out. It took a loss of 2 cents a share and turned it into a profit of $1.11.

How did it do that?

We don’t know exactly, but the usual magic depends on declaring certain expenses “one-time-only outlays that might give investors a misleading picture of the regular and usual earnings of the business.”

That gets you through one year. Then, the following year, you find other mistakes that you swear you will not repeat.

In smaller companies – especially in the tech sector – the practice is even more extreme.

Twitter, for example, showed a loss of $21 million in the third quarter. But with a little hocus-pocus on the ledgers, it was able to turn that into non-GAAP earnings of $78 million.

Bitcoin is perfect for this kind of market. It doesn’t have to deceive investors about its profits. It has none.

And, of course, the statistics and metrics we use to keep track of the economy have also been faked.

The feds claim full employment when there are more working-age men without jobs than ever before. Consumer price inflation is seriously miscalculated – as everyone who goes shopping knows.

We don’t shop often. But the other day, we bought a pomegranate. It cost $2.50. The lady at the checkout was appalled. “Do you still want it?” she asked.

“Real” (inflation-adjusted) GDP is still rising modestly, but only if you adjust it by the fake inflation number. If you applied a more realistic figure, it would show the U.S. economy in recession for the last 10 years.

Meanwhile, the world’s governments go further into debt on the fake premise that they will pay it back.

Bitcoin has no debt problem, either. Nor does it have any of the fake qualities of other investments. It is 100% real… or at least 100% not fake.

It has no sluggish, greedy management to mess up the company’s business… no rising material costs to squeeze its margins… no wages to renegotiate… no bonuses to pay… none of the things that pinch profits.

And it doesn’t have to tell lies. The truth is strange enough.

One new crypto “coin” was called UET. Its promoter explained the investment thesis as follows: “You’re gonna give some random person on the internet your money.”

UET stands for Useless Ethereum Token – a reference to the second-largest crypto asset by market value, Ethereum – and has a logo with someone giving you the middle finger.

Nevertheless, it still trades… for approximately nothing.

Here at the Diary, we’ve been skeptical of bitcoin… but ready to be impressed.

Our sons think it’s the real deal – le dernier cri in money circles. They took some of the family money and invested it in cryptos in June. In less than five months, we’re up more than 200%.

There’s nothing like success to stop the learning process. You don’t ask questions when prices are rising.

Still, we can’t help but wonder. Maybe the mysterious creator of bitcoin, Satoshi Nakamoto, was a genius. But it’s unlikely that there are so many others.

It’s certainly been an extraordinary year for bitcoin.

As Bill mentioned above, the world’s first cryptocurrency is up 870% year-to-date. 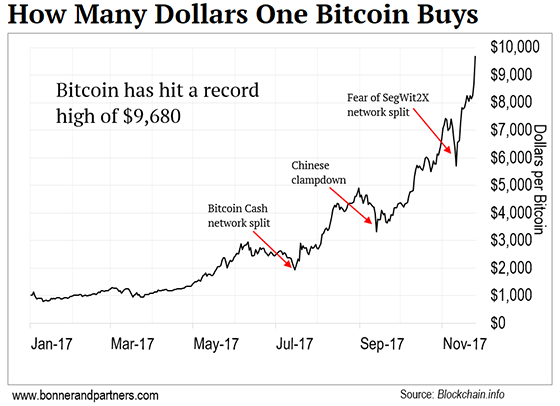 As you can see from today’s chart, it hasn’t been a smooth ride.

This was driven by fears of the network splitting into bitcoin and a new competitor called Bitcoin Cash.

Between September 1 and September 14, bitcoin saw a drawdown of 32% after the Chinese government clamped down on cryptocurrency exchanges.

And between November 4 and November 12, bitcoin saw a drawdown of 23% on worries of another network split, known as SegWit2x.

But so far, the popular cryptocurrency has rebounded from each hurdle. It hit a new high of $9,680 today.

Bitcoin Electricity Costs Soar
Bitcoin isn’t created from thin air with a few keystrokes. New coins have to be “mined” by computers that solve complex cryptographic problems. And in 2017, the amount of power consumed by these miners is rivaling the consumption levels of some countries.

This Will Rewrite Medicine as We Know It
Bill’s chief technology analyst, Jeff Brown, reveals a cutting-edge technology that will permanently cure countless diseases. Millions of lives will be saved. And early investors have a chance to profit immensely.

Why Wall Street Secretly Hates the GOP Tax Plan
The proposed tax overhaul being debated in Congress could be trouble for Wall Street. That’s because the bill would drive up taxes for the wealthy hedge fund crowds in the Northeast. And that has some funds looking toward the exit.

In the mailbag, readers consider if Roy Moore should be a U.S. Senator…

If Roy Moore is guilty of child molestation or sexual misconduct, then by all means, he shouldn’t be involved in public service anymore. If not, then the opposite is true.

I have noticed over the years that you always criticize our nation and our politicians. Rightfully so, in most instances. I do the same thing. The difference is that I care about the U.S.A., and Mr. Bonner seems to hate everything about it. He doesn’t live here, but made a lot of money here.

It is a perversion of our Constitution to say that there is a “separation of church and state” mandate. A few years before I was born, that perversion came into existence via the ACLU.

Placing biblical references on public land is not a violation of the U.S. Constitution. To dictate to our citizens that they must be Christians would violate the intent of the Constitution.

As America continues to move toward implosion – more than likely inevitable – why do you seem to find it so delightful? I don’t understand this. You have a bully pulpit. Why not try to be helpful rather than exploit it for the sake of being the “I-told-you-so jerk”? One reason I am so pessimistic about our future is wise people who just don’t seem to care.

I do enjoy your daily missives and bombasity. However, in your piece about Judge Roy Moore, did I sense you overlapping Judge Moore’s lack of understanding about the “separation of church and state” with your more informed view?

I sense that I did. And I suspect that you, like so many others in our country today, have bought into the lie about what the historical meaning of the “separation of church and state” actually entails, as opposed to the more recent liberal and statist version we swallow today. Check it out. It might be good fodder for a future Diary.

Also, I submit to you that your critiques of Judge Moore’s motives and reasoning surrounding the removal of the Ten Commandments from the courthouse and his desire to bring God’s Word into the public square are an affront to God’s Word in Scripture.

We live in a society and culture today that is hell-bent on removing the authority of God’s Word in Scripture. And we wonder why we see such evil manifested all around us. Even among professing “Christians” today, we see the watering down of Biblical truth across the mantel of political correctness and inclusiveness. To what end?

Thank you for your brilliant and very entertaining Diary essay about Roy Moore. Excellent.

I’m not sure what I’d do if I lived in Alabama. I might wind up voting for Moore, although I do consider him another symptom of our collective political insanity. I think he is innocent of the recent charges against him, but I doubt that that is the most important issue. Your arguments are more germane. Cheers.

We are on the verge of a revolution in healthcare…

That’s the message from Bill’s chief technology analyst Jeff Brown. A bleeding-edge piece of technology is about to turn a corner. When that happens, diseases like cystic fibrosis and Huntington’s could be cured permanently. And early investors have the chance to make a fortune. Details here. 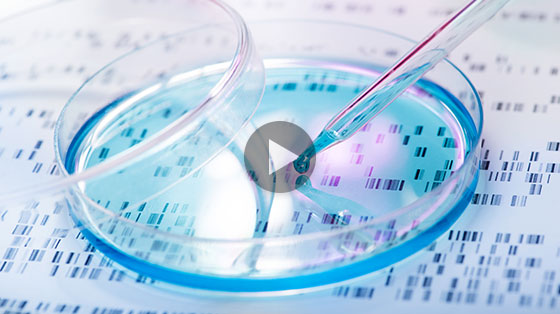