The big deal is that the Fed is raising interest rates.

Even this wouldn’t be a big deal, except that it comes after 30 years of lowering them.

Now, not only is the world economy dependent on EZ credit, its biggest debtor – the USA – is about to go on a borrowing spree.

As we pointed out in our much-underappreciated book, Hormegeddon, almost everything is subject to the law of declining marginal utility.

Debt being chief among them.

A little may be a good thing; a lot is not. And when you have too much debt, something bad always happens.

What will happen now?

That’s what we wait to find out.

Most likely, stock and bond prices – which have been supported for so long… and pushed up so high… by debt – will now fall.

But let us begin our wondering by looking at the stock market itself.

Recently, we said to a friend that we thought it was a “giant fraud.”

Were we overstating our position?

Asked to value a private company, we explained to the owner how to do it: “Just take the last three years of earnings. Average them out. And multiply by four.”

The owner was taken aback.

“It must be worth more than that. We haven’t earned much so far. But we’re correcting some errors. It will be worth a lot more in the future.”

“Well… when you get the errors corrected, you can average the previous three years of earnings and multiply by four.”

If you buy a private company, you will pay four to 10 times earnings, sometimes less. But the 30 public companies listed on the Dow sell for an average of about 25 times earnings. You get a lot more for your money in the private world.

But that’s just the beginning of it…

If you own a private company, you get 100% of the profit. You can do with it as you please.

You will want to reinvest some of your earnings… and save some to cover operating costs and unamortized emergencies. The rest is yours.

Owning a share in a public company, on the other hand, gives you no control over your money. The average dividend yield of a Dow stock is just 2.5%.

Many companies pay no dividends at all – giving you nothing for your money.

When you own a private company, you also have control over how the company spends its money.

And maybe the company needs a private plane to take you there… and membership in a golf club, where you can entertain prospective clients.

You get the perks, in other words, not some other guy.

In a public company, the other guy is a manager. He is supposed to “answer to the shareholders.”

But as we keep saying, “Ignorance increases by the square of the distance in time and space.”

The typical shareholder is a long way from the corporate headquarters. He usually knows nothing about what is going on in the business.

He may not even be aware that he owns the stock at all. He buys index-tracking mutual funds or exchange-traded funds (ETFs), with no idea what is in them.

[Editor’s Note: In Saturday’s Diary, Bill’s colleague Chris Mayer will be examining how index investing is pushing some stocks up to absurd valuations. So keep an eye out for that in your inbox.]

Yes, there are a few high-powered professional investors and activist shareholders who can still hold management’s feet to the fire. But the typical manager gets little supervision.

The shareholders have no way of knowing what is going on. And the board of directors is often composed of cronies, stuffed shirts, and politically correct token members.

In this manner, real capitalism is distorted. It becomes crony capitalism.

The public company manager’s compensation, for example, is not determined by the owners… but by a committee made up of industry hacks.

They do not try to get the best deal they can. Instead, they just make sure the compensation package is in line with other big corporations.

Which, of course, it is! They are all perverted in the same way…

The manager typically cares only about short-term goals; his compensation is tied to them. Then, by hook or by crook, his targets are hit.

One of the most widely used crooks is the practice of cooking the books with non-GAAP accounting tricks. (GAAP stands for generally accepted accounting principles and is a commonly followed set of rules for financial reporting.)

“Non-recurring” expense items are deducted with the simple explanation: “Well, that didn’t work; we won’t do that again.”

The rewards often go far beyond the market rate for management talent.

Jack Welch famously took home $416 million when he retired as CEO of General Electric. By 2006, his net worth was reported at $720 million.

What hired hand is worth that much? What mortal man’s time is so precious?

A new study shows that the more you pay a CEO, the worse he does. No kidding. Forbes:

Across the board, the more CEOs get paid, the worse their companies do over the next three years, according to extensive new research. This is true whether they’re CEOs at the highest end of the pay spectrum or the lowest. “The more CEOs are paid, the worse the firm does over the next three years, as far as stock performance and even accounting performance,” says one of the authors of the study, Michael Cooper of the University of Utah’s David Eccles School of Business.

Mr. Welch was no exception. Subsequent events showed that he had set the company up for failure – by expanding too much in too many directions at too high a cost in borrowed money.

In retrospect, he should have gotten a kick in the pants… not a huge bonus. But by then, the culture had changed. The economy had changed. And the markets had changed, too.

Mr. Welch financialized GE. He turned it from relying on making things and serving customers… to earning the bulk of its money from financing. He turned its face, in other words, from Main Street to Wall Street.

Doing so, he was not inventing a new business… or pioneering a new industry… or finding a new and better way to satisfy customers. What he was doing was exploiting a perverse and insidious trend that had been set in motion by the feds.

Investors have been trained to believe that buying shares in public companies – “stocks” – is a way for them to participate in the great growth of commerce and industry… and that by buying shares, they are “funding” U.S. enterprise with their savings.

And that for doing so, they are rewarded with financial gains. As the economy grows, they get richer.

But Mr. Welch’s tenure at GE – from 1981 to 2001 – coincided with a big change in the U.S. business world. It was adjusting to a tide of fake money, lent at fake interest rates.

It was EZ money finance that allowed Mr. Welch at GE to go on a buying spree and earn his bonuses. It was fake money from the Fed that supported stock prices, not real savings.

And it was Alan Greenspan, Ben Bernanke, and Janet Yellen at the Fed who made sure stock prices went up.

Yes, as they say on late-night TV, there’s more.

As the Fed raises rates, companies are pulling back on borrowing…

Today’s chart tracks commercial and industrial bank loans over the past nearly 20 years.

This is a good barometer for the health of the economy, as bank loan growth to businesses typically goes hand-in-hand with economic expansion. 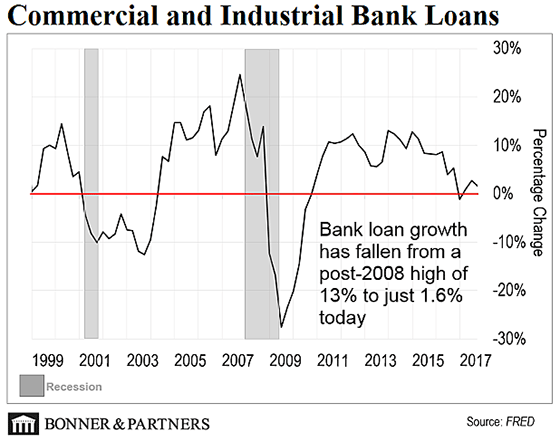 In the past, that kind of growth has coincided with economic recession (gray bars on the chart).

The Highest-Paid CEOs Are the Worst Performers
Paying through the nose for CEO compensation is a dumb idea. A new study of 1,500 companies with the biggest market values shows that highest-paid CEOs do a lousy job as far as stock market performance goes.

All You Need to Know About Cryptocurrencies
How do cryptocurrencies work? And how can you get a hold of them? Here’s all you need to know in one handy primer.

The Biggest Medical Breakthrough Since Antibiotics
2018 could be the year that transforms the medical industry. That’s because a bleeding-edge piece of technology is currently undergoing human trials. And it has the potential to cure thousands of diseases.

That is the greatest explanation I have ever read! Trickle down. I’m going to use it to enlighten friends. Thank you!

You are giving us the academic version of tariffs and free trade. Real life often proves academics wrong. How else to account for a bunch of economic Nobel Prize winners nearly ruining themselves, and the country, by applying their collective wisdom to the market some years back?

Like any war, a trade war is never good. But the threat, if credible, gets attention. That, I think, is the intent of Trump’s plan. A country with a high trade deficit is in a much more powerful position in such a negotiation than the ones benefiting from the status quo. That is a reality.

I don’t follow how easy credit after 1971 led to buying more imports than domestic products. Didn’t cheaper goods from overseas, and the emergence of new attitudes towards quality/price/dispose-and-replace, drive that change? Thanks for your illuminating writings.

Our trade deficits are the problem, and Trump realizes this. We are sending our wealth to China – $400 or $500 billion every year – and they lend us the money by purchasing U.S. Treasuries to buy more of their products to create prosperity in China.

We have to start manufacturing our products, even if it means they will cost more.

Despite Bill’s usually worthwhile observations, I’ve never been moved to contact you before. And I don’t always agree with some of his criticisms – for example, of government. But his comment, “in most of life – you win by letting the other guy win, too,” is among his best.

Could this guarantee Trump’s reelection?

The president has only just finished his first year in office, but there’s already talk of Trump 2020. And according to our colleagues at Casey Research, a “silo” in eastern Texas could guarantee Trump’s second term. See the story for yourself right here. 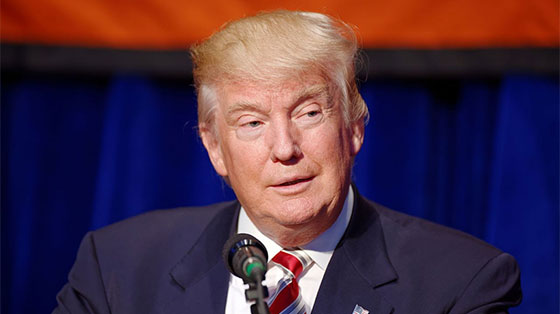