BALTIMORE, Maryland – “It’s easy to criticize,” the President of the University of Vermont seemed to be looking in our direction. “But cynicism doesn’t help build a better world.”

It’s the season for weddings and graduations. We had one of each this past weekend… a wedding in Delaware and then a graduation in Vermont. Both brought tears.

The wedding took place on an old Dupont estate that has been converted into a country club. Elizabeth’s goddaughter, a beautiful redhead, got married to a handsome and charming young black man.

This cross-race marriage would have been shocking in the Maryland of our youth. On Saturday, it seemed perfectly natural. Times change.

We couldn’t stay for the drinking and dancing, however. Our youngest son was to graduate from the University of Vermont on Sunday; we had to hit the road.

The ceremony in Burlington was our fifth one. Saint John’s College… Davis and Elkins… Boston University… University of Virginia… We’ve been to “commencement” celebrations at them all. And all were full of fun, fraud, and foolishness. The University of Vermont was a standout in all three ways…

But we’ll come back to that tomorrow…

Let’s at least begin the week “on message.” The Diary is about money. Today, we’ll stick to the subject.

Old friend Mark Hulbert has done some research on the likelihood of a crash in the stock market.

Writing in Barron’s, he points out that the risk… or, more properly, the incidence… of crashes, historically, has been very small:

…consider that the 1987 and 1929 crashes were the two worst one-day plunges since the Dow Jones Industrial Average was created in 1896. Given that there have been more than 32,000 trading sessions since then, the judgment of at least this swath of history is that in any given six-month period, there is a 0.79% chance of a daily crash that severe.

And there’s no reason to believe that the frequency of future crashes will be significantly higher. Xavier Gabaix, a finance professor at New York University, has derived a crash-frequency formula that he believes captures a universal trait of all markets, not just equity markets or those in the U.S. According to that formula, the odds of a 12.8% crash in any given six-month period are 0.92%, almost as low as the actual frequency in the U.S. stock market over the last century.

This means that the average investor over the last three decades has believed a severe crash to be more than 24 times more likely than U.S. history would suggest, and that investors currently believe the risks to be 28 times more likely.

Whoa! Are investors idiots, or what?

Your editor is among those who happily over-estimate the risk of a crash.

And now that the market has recovered again… he expects another one.

Statistically, as Mark points out, the likelihood of a crash coming on any given day is small. But that is a little like telling a turkey not to worry because the likelihood of Thanksgiving is only 1 out of 365.

Eventually, all turkeys and all investors get whacked. And, generally, the longer a market goes without a correction, the more it needs one.

Besides, there is something a little fishy about these numbers.

In the last 20 years, there were the aforementioned  sell-offs in the stock market – one in 2000, heavily concentrated in the Nasdaq… and the other across the board in 2008. But people don’t think of investing in terms of avoiding the specific day of crash.

Investors don’t really care if a crash happens on a Wednesday or a Thursday. If they think a crash will happen any time within six months, they usually want to stay out of the market… realizing that they can’t time these sorts of things with any precision.

So if we look at it in these terms… there were 40 six-month periods in the last 20 years. And crashes happened in two of them… or one in 20.

Also, the statistics Mark cites do not really gauge the “risk” of a crash. They speak only to the frequency.

Imagine the drunken imbecile who puts a bullet into a revolver, spins the chamber, and puts the gun to his temple.

“There’s only one chance in six that this will kill me,” he says.

Statistically, he is right. The odds are in his favor. But what a bad bet!

The true measure of risk involves more than just statistical probability. The frequency needs to be multiplied by the gravity in order to get the true picture.

The typical investor is in his 50s. If the next stock crash is followed by a big bounce… like the other two crashes in the last 20 years… he will be glad he paid no attention to our warnings and just kept his money in stocks.

Further Reading: Bill doesn’t think the next crash will be like ’29… He says it’ll be much, much worse.

It’ll be an epic collapse carrying far beyond the stock market, as the very money we use every day disappears before our eyes. It’s a collapse for which most Americans are wholly unprepared.

And that’s why Bill was so concerned he put together an urgent warning. He wants everyone to know exactly what’s coming… how to prepare for it… and how you might even be able to turn it to your financial advantage. So watch here now.

The middle class is getting squeezed.

Typically, middle-class consumers shop at stores like Nordstrom’s (JWN) and Kohl’s (KSS). Both of these retailers are down over 23% this year. Even Target (TGT) is down 18% since the middle of April.

Compare that to heavy discounters like Wal-Mart (WMT) and Dollar General (DG), which are both up over 14% this year.

The chart below shows the discounters’ massive outperformance. 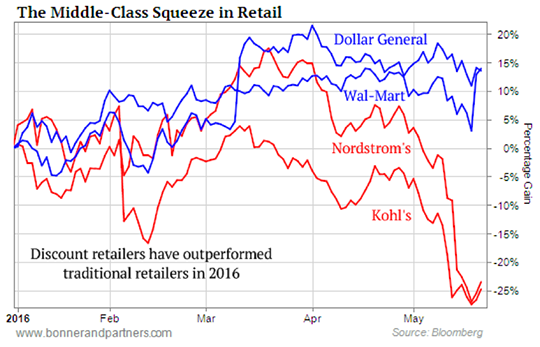 War on Cash Passes Another Milestone
2015 was the first year that Britain used cash for fewer than half of all payments by consumers. But a recent survey suggested that customers with these type of cards are twice as likely to report being victims of financial fraud.

This Group Is the Biggest Tax Evader
The Panama Papers exposed thousands of people who set up offshore tax havens to evade taxation. This one occupation, by far, is the most cited career for tax evaders.

The Most Important Lesson for Getting Rich
With three unique stories, one market expert teaches the most important lesson of investing… and the key to getting rich with stocks.

Bill’s Diary entry about the revived revolution at the ranch touched off a flurry of feedback.

But first, a special note of thanks to Bill from a very appreciative Diary reader…

I opted out of your service because I couldn’t see any possible way that it could benefit me. Well one tip from your site helped my family more than you will know.

My husband is retired military and we always kept all our money in the bank. Our account was hacked through a credit card company and then they accessed our bank accounts.

You suggested we put away some cash and we did. Not a huge amount but enough to pull us through this crisis.

I think when we recover financially I owe you the payment that you refunded to me.

Thank you so very much. We live on a fixed income, and I don’t know what we would do without this little bit that we kept out of the bank account.

God bless you. Thanks ever so much.

Sorry to hear about your troubles. This is what happens when people with money buy land from people who stole it from those who lived on it originally claiming eminent domain.

Ownership of anything that is earthly (land, creeks, rivers, lakes, trees, etc.) is all an illusion, a perception that you, because you have more money than someone else, deserve to have that item more than the person who lived there before you.

Regarding the uprising at the ranch: this is the perfect time to initiate the Atlas Shrugged response. Bill should sell all the cattle, burn down all the buildings, and destroy all the roads and infrastructure. And disappear. Let the Originarios discover how difficult the real world can be.

You seem to forget that this one planet in the entire cosmos that we know of was made for "us"!  We were not given pieces that were our personal properties. We as a global community were given the entirety to use.

My ranch is much smaller than yours, but still it does not belong to me. Check it out in the Statutes. I have the use of the land only. I am essentially its caretaker.

If the government wants to do something else with it, I am only one vote among many and I lose. It has nothing to do with money or how I earned it. It is a good faith agreement.

My farm was stolen from the Native Americans. Nothing you steal changes the ownership of the stolen property—it just has a new caretaker—and they have every right to steal it back when they become more powerful than you—and you know they will.

I think I can make the argument that my ancestors were Swedes, then Danes, then the name sake of Leicestershire England. Some of my family lived in what is now, Westfalen, Germany before moving to the States in 1750. What part of Sweden do you suppose I can reclaim?

Dear Mr. Bonner, per your article today of "Bad News from the Ranch," sell your cattle and bail. You were taken. YOU DONT HAVE WATER and you certainly don’t have much goodwill capital left if you ever had any to begin with.

Give these people what they deserve. They want it and you should let them have it!

Good luck in your fight. It’s high time someone takes on the activist downtrodden. They appear from everywhere and are merely tools of the lawyers who use them.

A revolution is going on. Of course the indigenous people of Argentina have a right to the land their ancestors were there long before they got invaded. Just because you think you bought the land legally does not by any means, mean that you own it.

In the end you cannot take it with you so you do not own it. Greedy piece of work you are. Same shameful behavior by people with money all over the world.

Sorry to hear you are having so much trouble, hope it gets sorted soon. And no one should have to apologize for working hard and having money and property! All the best.

Do be careful and vigilant. This may not be over yet.

Doug Casey says a financial hurricane is coming to America in 2016.

In this urgent presentation, Doug explains how this economic crisis will play out…

And how you can make thousands with a powerful crisis investing approach most Americans have never heard of. 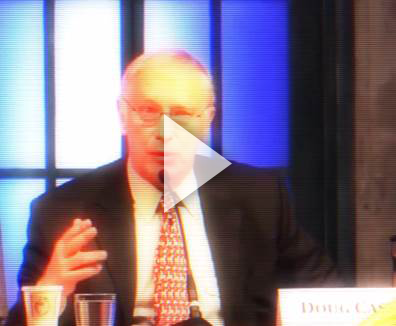