Editor’s Note: For today’s weekend guest essay, we turn to our proprietary “Doom Index.” Remember, the Doom Index is a system developed by Bill and Bonner & Partners’ head of research, Joe Withrow.

The Doom Index remains at 6 again this quarter, as we continue to see a “tale of two economies.” 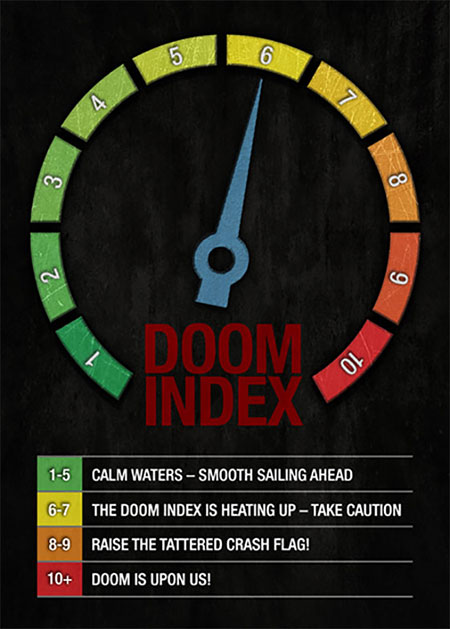 Today, we’ll share some of the highlights from the data that makes up our Doom Index.

Let’s start with the financial side…

Stocks remain as overvalued as they have been since the dot-com bubble, according to traditional valuation metrics… even with this week’s fall.

We get an idea of this by looking at one of Bill’s favorite metrics, the cyclically adjusted price-to-earnings (CAPE) ratio.

The CAPE ratio looks at the price of stocks relative to their average earnings, adjusted for inflation, over the past 10 years. This allows us to “smooth out” the year-to-year swings in earnings to get a better “big-picture” view. 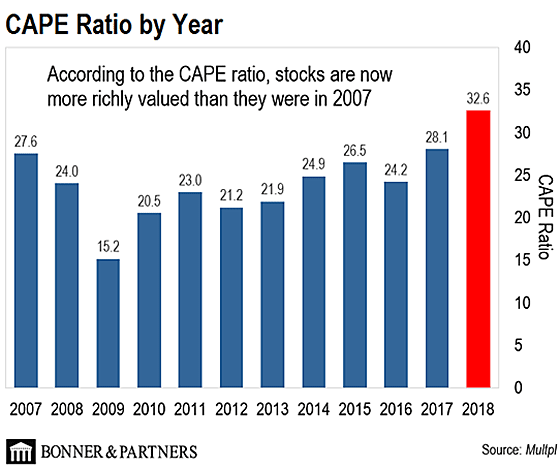 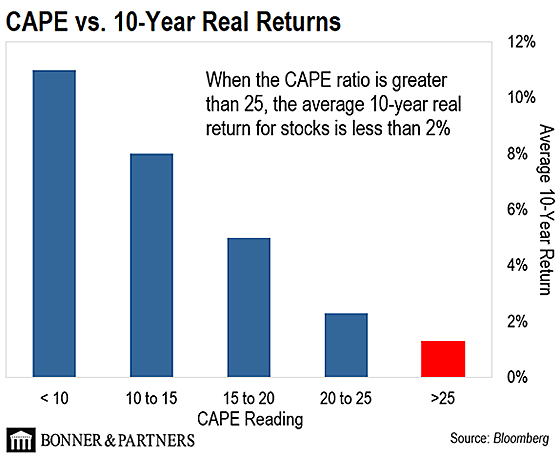 Another indicator we track is the percentage of corporate bond downgrades versus upgrades. Generally speaking, are America’s corporations becoming more creditworthy or less so? This gives us an idea of the health of the credit market.

In Q3, we saw more corporate bond downgrades than upgrades – which has been the case for 12 of the past 13 quarters.

These downgrades come at an inopportune time. Roughly $4 trillion worth of corporate debt is coming due in the U.S. over the next five years. And $1 trillion of that is of non-investment-grade, or “junk,” status. 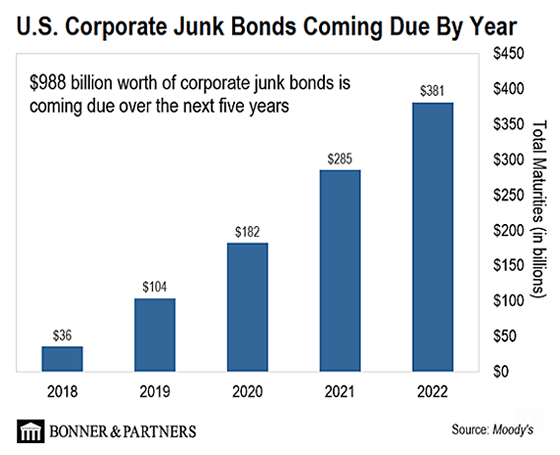 And with just $2.3 trillion in cash and cash equivalents on the books, U.S. corporations do not have enough money to pay off all this debt without affecting day-to-day operations. So much of this debt will have to be refinanced.

But with the Fed tightening its monetary policy and interest rates rising, it will be difficult for financially shakier companies to secure financing. If defaults start to pop up, we can expect to see the credit markets freeze… and that’s when bad things happen.

But that potential scenario is still a little way into the future. Junk bonds held steady for the second consecutive quarter, suggesting that bond investors are not yet worried about – or perhaps have not yet noticed – the cracks forming around them.

With credit growth at 5%, it tells us that money is still being lent, so new credit is still coming into the system.

Now, let’s move over to our real economy metrics…

The index surveys more than 300 U.S. manufacturing firms and gives us a snapshot of the overall health of the manufacturing sector. It monitors employment, production, and inventory levels, among other things. 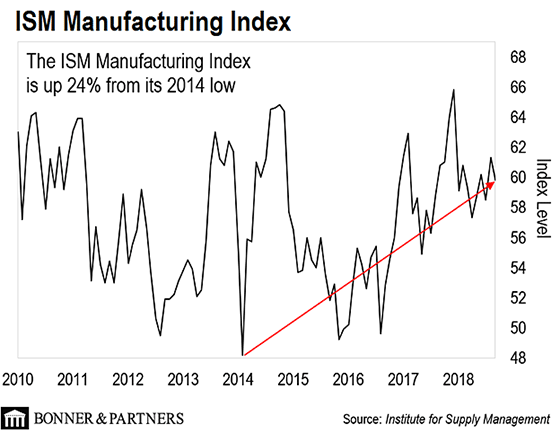 Meanwhile, railcar utilization, a proxy for the amount of goods being transported, hit its highest level in nearly four years. And non-farm payrolls ticked up ever-so-slightly.

And of course, the mainstream media is raving about how strong these numbers are.

But there could very well be a fly in the ointment…

In August, the Port of Oakland in California reported a record import volume, mostly from China. The 9.2% surge in volume marked the busiest August in the port’s 91-year history.

And national data suggests that the Port of Oakland’s record volume was not a one-off occurrence. Similar spikes occurred in other major ports across the United States.

The U.S. monthly trade deficit with China exploded higher in August and September. And U.S. imports from China accelerated 14% over last year…

So what accounts for this spike in U.S. imports?

This suggests that U.S. companies were front-loading orders to beat the new round of tariffs.

This conclusion was confirmed by Bloomberg Intelligence analyst Rahul Kapoor, who said, “We have a rush game with the tariff.” Kapoor also noted that cargo was being left behind at Chinese docks because America-bound ships were so full.

This front-loading to beat the trade war may have had a significant effect on the robust manufacturing and railcar utilization numbers we saw during the third quarter.

We wrote to you back in August about how the data shows that the Main Street and Wall Street economies are diverging… and how eventually, something will have to give.

Our suspicion was that the latter was more likely… But we didn’t have a tangible catalyst in mind at the time. Now, that catalyst may be coming into focus.

There is strong evidence suggesting that the robust economic data of Q3 was partially inflated by U.S. companies rushing to beat the trade war.

But now, the U.S. tariff package on $200 billion worth of goods from China has taken effect. And as Bill has written many times, it’s free trade, not tariffs, that creates new wealth in an economy.

If the trade war drags on, it will ultimately be a drag on Main Street’s economic growth. If that’s the case – if economic numbers decline to close out the year – investors may sour on the lofty valuations of U.S. stocks.

Will the real economy continue to chug along? Or will the trade war gum up the works and bring about the end of this bull market? We’ll know more when fourth-quarter data comes in at the end of the year.

For now, our crash alert flag will remain in storage for at least another quarter, per the Q3 Doom Index reading.

In our last report, we suggested that a reading of 6 was a “soft warning” level. But perhaps “caution” would be a better word than “warning,” as conditions do not yet appear to be in place for the big crash to occur.

However, we should expect to see bouts of heightened volatility – a telltale sign that this bull market is long in the tooth.

So while it’s not yet time to liquidate stocks and batten down the hatches… caution and sound risk management are highly advised at this time.

P.S. The Doom Index is telling us that U.S. stocks should hold steady for a while longer. But it’s never too early to find ways to protect the wealth you already have.

Bill and his coauthor on The Bill Bonner Letter, Dan Denning, recently released a new report. They call it “America’s #1 Portfolio Protection Plan.” It details an unseen threat to U.S. stocks, and gives you actionable steps to protect your wealth today. You can order your own copy here.