PARIS – “Your flight has been canceled.”

Those were not the words we were hoping to hear when we got to Dulles International Airport last night. But Air France is on strike. So we quickly changed plans… and traveled to Paris on United.

That wasn’t the end of it… because the French train crews are on strike, too. C’est la France!

Ever resourceful, our U.S.-based assistant found a driver who would take us out to Normandy, where our car has been parked for the last two months, faithfully awaiting the return of its master.

The car is very patient with us. The 12-year old Nissan Patrol sits for months… sometimes an entire year… waiting for us. Then, when we finally show up, the battery is dead.

But that problem will be overcome later today, we hope, and we will be on our way to Ireland, taking the ferry overnight. Stay tuned.

Meanwhile, as we mentioned yesterday, bitcoin seems to be useful. When other money fails… and gold is hard to get… bitcoin gives people a way to escape from the trap of a rapidly disintegrating paper currency.

As long-term readers of this Diary know, we are connoisseurs of disaster.

Give us a 1922 deutschmark… an excellent vintage! And it’s hard to beat. If you had bought a house in Berlin in 1921, you could have paid off your mortgage in 1923 for the price of a cup of coffee.

Or, how about a Zimbabwean dollar from 2006? That was a great year. Plenty of liquidity. We used to have a 10 trillion Zim dollar note in our wallet, just to remind us not to trust paper money.

But the South American blends are good, too.

Both Brazil and Argentina have produced some fine catastrophes. In Argentina, the inflation rate hit about 12,000% in 1989. And in Brazil, one of our colleagues recalls what it was like living there in the ’80s:

Dad would get paid twice a day. We’d meet him at the office. And then, we’d take the money right over to the grocery store. We had to get there as soon as possible because they marked the prices up all day long. If you waited, you’d get a lot less for your money. And there might not be anything left to buy.

There are many different vintages of disaster. There are natural disasters, such as the explosion of Vesuvius, which wiped out Pompeii in the first century, AD.

There are military disasters, such as Athens’ foolish war against Sparta in the 5th century BC, Japan’s attack on Pearl Harbor in 1941, or the U.S.’s attack on Iraq in 2003.

There are political disasters, too – such as the French Revolution or the coup d’état in Russia in 1917.

Our favorites are the financial disasters… which often lead to disasters of the other sort.

And as we write, a classic catastrophe is developing in Venezuela. The bolívar – the Venezuelan currency – is expected to lose about 99.99% of its value this year.

Obviously, you don’t want to store your wealth in bolívars. Instead, you’ll want to get rid of them as soon as possible. Our report yesterday explained that those who could do so were moving to bitcoin.

Rich people can avoid financial disaster by diversifying their wealth outside the national currency and outside the country. They open bank accounts in Miami or Switzerland, for example. And now, they have another option: cryptocurrencies.

The Financial Times reports that 5,000 people are leaving Venezuela every day. At that rate, the country will be completely empty by 2038. This is not just a matter of money, in other words.

Financial disaster often leads to social, political, military, and health disasters. Were it not so, the coming U.S. financial crisis would be merely entertaining. After all, who cares if rich people lose money?

For poor people, alas, the stakes are higher. More than 600,000 Venezuelan refugees already live in Colombia.

They scrounge for food. They pick through trash for something they can eat… or use. They work at pick-up jobs, or as prostitutes, and sleep rough under bridges or in parks.

“We are dying of hunger,” said a refugee to the FT. “Three members of my family have already died of starvation.”

Most hospitals in Venezuela have no medicine, and little or no running water. Lack of food, medicine, and sanitation makes people more vulnerable to illness – especially communicable diseases.

After a 40% drop in output, more than four out of five people are said to be impoverished. “Extreme poverty” has tripled in the last four years. Law and order are breaking down, too, both in Venezuela and in neighboring countries.

Those who do manage to get across the border to Colombia or Brazil often find little hospitality.

There are so many of them that local services are overwhelmed. Jobs are scarce. And few people are happy to have so many desperate refugees on their doorsteps.

How do these crises happen? Slowly… and then all of a sudden. The feds spend too much money. Eventually, they run out of other people’s money. So they “print” more.

Then, they are trapped by the bad money, too; the easiest way out is simply to print more and more… until the whole economy collapses.

That process is already well underway in America (more tomorrow!)

It’s great for connoisseurs of disaster; bad for everyone else.

Our advice: Open a bitcoin account, just in case. And keep a “bolthole” – a little farm, or at least a place in a stable and largely self-sufficient community – where you can wait out the crisis.

Editor’s Note: Readers have asked Bill for advice on how to prepare for the next financial crisis. Now he delivers concrete steps you can take today. Here’s what to do…

To learn how to open a cryptocurrency account and buy bitcoin today, refer to this free report. And if you’d like to join cryptocurrency expert Teeka Tiwari in actively trading the most explosive crypto plays, go right here.

What about finding your very own “bolthole”?

Subscribers to The Bill Bonner Letter can download this report to discover six overlooked, undervalued “bolthole” towns right here in America. If you’re not a subscriber to Bill’s monthly newsletter, go right here.

Short-term interest rates are on the rise…

That’s the story of today’s chart, which tracks the yield on 2-year Treasury notes from 2008 to today. 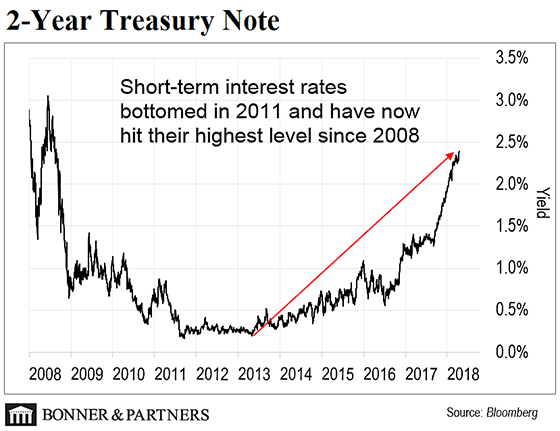 As you can see, short-term interest rates bottomed in 2011… but have now moved sharply higher.

Short-term rates are important to watch. That’s because borrowing costs tend to “feed” off them. As Treasury yields rise, interest rates on corporate and consumer loans usually follow.

How Fund Managers Are Preparing for the Robots
Machine learning and artificial intelligence are taking Wall Street by storm. The future of asset management might look very different from what it looks like today. Here’s how the biggest names are preparing…

Yes… You Pay Tax on Bitcoin
As Bill mentioned, bitcoin is a way to insulate your wealth from central banks and intrusive government. But if you turn a profit, expect the tax man to come knocking…

How to Bulletproof Your Portfolio
Stocks have been more volatile thus far in 2018 than they were in all of 2017. In these turbulent times, you need a plan. Chris Mayer, one of Bill’s top analysts, shows how you can chaos-proof your portfolio.

In the mailbag, kudos for Bill and a question about the future…

I have enjoyed reading your Diary for many years, Bill. I don’t always agree with your rants, but you present them in such an interesting and entertaining fashion. Your storytelling skills are superb. Whether people love or loathe your ideas, one thing stands out: You have been faithfully consistent with your message for as long as I can remember. How was the massage?

How cold does it have to get before anyone warns us about crop failures and food shortages? How many earthquakes have to occur and destroy cities before people are warned that lots of earthquakes are expected as the Earth gets colder? Should you inform your readers what to expect during this mega disaster that is predicted to kill almost half of the world’s population and has already begun to hit the world? The time to prepare is running out, and nobody is warning people and telling them how to prepare for it. Do you think you can – or want to – do anything to help people? Someone needs to get the warnings started. I think you can.

Further Reading: Nobody knows precisely what the future holds. But Dan Denning, Bill’s coauthor on The Bill Bonner Letter, shares a few steps you can take today to prepare for an uncertain future. Go right here.

As Bill mentioned, buying some bitcoin is a good way to protect your wealth from government meddling…

But if you’re still unsure about buying cryptos directly, there are other ways to profit. Jeff Brown, Bill’s top technology expert, has uncovered three ways to potentially make 21 times your money without ever logging on to a cryptocurrency exchange. Here’s how. 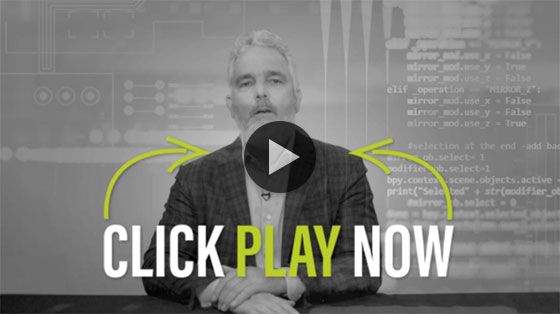