At 29, she is the youngest woman ever elected to Congress; she will doubtless be there for decades to come.

Eighteen months ago, she was working as a waitress. Then, even though her opponent outspent her 15-to-1, she won the race to sit in the House of Representatives.

Ms. Ocasio-Cortez has a pleasant look about her. We’d probably like her if we met her. But she is clearly a danger to herself, her constituents, and to the nation.

More about her in a minute… First, we check in on the stock market.

Stocks were up again yesterday, for the third day in a row.

“It looks like the bottom is in,” say the Wall Street shills. “Time to buy the dip.”

Readers are reminded that in a bull market, you buy the dip – when you can still buy stocks at a reasonable price. When stocks become expensive and then start to go down, it’s time to change the strategy.

It looks to us like a bear market began in September, 2018. Since then, stocks are down. And since they are still very expensive, and could fall much lower, a better move would be to “sell the bounce.”

As Joe Withrow demonstrated yesterday, stocks tend to rally immediately following a selloff. But the bounce is usually short-lived. Then, the bear truly takes hold.

Still, you never know. U.S. President Donald J. Trump thinks “his” economy is great. Yesterday came this tweet from him:

Economic numbers looking REALLY good. Can you imagine if I had long term ZERO interest rates to play with like the past administration, rather than the rapidly raised normalized rates we have today. That would have been SO EASY! Still, markets up BIG since 2016 Election!

Mr. Trump doesn’t have to worry about the Fed. Its real interest rates are still close to zero. And it has no intention of raising interest rates back to normal… not if it means a selloff in the stock market.

And since a selloff in the stock market is exactly what it means, there will be no normalization of Fed policy.

Now, back to today’s dot in need of connecting…

When the mainstream flim-flam financial policies fail, people look for scapegoats and solutions on the edges.

Now, they turn their sore eyes to New York’s 14th district, where Ms. Ocasio-Cortez has been elected to Congress. The product of the Puerto Rican Enlightenment, she believes there is no problem that a government program can’t solve.

Got healthcare issues? She would offer Medicare for All.

Need a job? She proposes a Job Guarantee.

Want to go to college? Get ready for Tuition-free College.

Worried about global warming? How about a large-scale “green infrastructure” program?

Wait a minute… You’re probably wondering, how can we afford all these things?

Well, in a few months, we won’t worry about such problems… not with the economy melting down.

Besides, the new Congresswoman from Queens has a solution: Tax the Rich! Squeeze them until the pips squeak!

Yes, it’s a “Green New Deal,” she calls it. And a cornerstone of it is the idea of raising income taxes on the super-rich to 70%.

It might only apply to people who earn more than $10 million a year, so most people would be for it.

Still, most sober observers dismiss the idea. “It will never pass,” they say. “It’s crazy… It’s absurd… It will harm the economy…”

But crazy plans that hurt the economy have a way of becoming the law of the land. Especially when the laws of the land are already crazy and absurd.

And when the existing laws of the land cause bankruptcy and chaos, people look for crazier, more absurd ones.

That’s how the first New Deal got put into practice. In the panic and despair of the 1932 elections, people were ready for a change. Franklin D. Roosevelt offered to shuffle the deck. And when in office, he pulled a few aces out from his sleeve and put into place a series of costly programs.

Our guess is that the next crisis will be severe and long-lasting, too. Stocks will fall hard. The economy will go into recession.

The Trump Team will pull out all the stops to make it go away (that is, it will spend beaucoup money it doesn’t have). The Fed will push rates into negative territory and buy up stocks as well as bonds.

But come the elections of 2020, the U.S. economy will be deep into stagflation – with rising prices (caused by runaway federal disaster spending) and little, or negative, growth (caused by the huge overhang of debt left over from previous bailouts and stimulus programs).

By 2020, people will be getting pretty tired of it. Donald Trump says it is “his economy” and “his stock market;” so he and his fellow Republicans will take the blame when “his disaster” doesn’t go away.

And the rich – who gained so much from the crackpot fake money system – will be held to blame, too.

Economists will point out that raising marginal rates on the rich to 70% will backfire, producing less income, not more.

But the masses won’t care; they will be eager to punish the rich, not just exploit them.

No one will have time to sit through our explanation of what went wrong… and how the Fed mismanaged the economy… and how the fake money system was doomed to fail… and why a boom founded on fake-money credit was bound to explode into a monetary/economic meltdown.

Nope… Instead, they will want simple-minded solutions. And Ms. Ocasio-Cortez and her fellow progressives will have them. Free tuition! Free medical care! Jobs for everyone!

Her programs may seem lame and loopy today, but they’ll be a hit – we predict – in the future. With the Republicans discredited by the financial disaster, radical Democrats will be elected all over the country.

And then, the intellectuals will explain why their programs “make sense.” In fact, they’re already on the case.

Celebrity economists Peter Diamond and Emmanuel Saez say the “optimal” rate is more like 73%, while Christina and David Romer put it at 84%!

Yes, gentle reader, as goofy and fumbling as federal policies are today… they could get even worse.

As far as we know, Ms. Ocasio-Cortez was a competent server. Which is too bad; the nation lost a decent waitress and gained what it least needed: another delusional, incompetent, and menacing member of Congress.

MARKET INSIGHT: THE BEAR COULD BE BIDING HIS TIME

If history is any guide, this bear market is just getting started.

Yesterday, we showed a chart of the S&P 500’s performance during the past six bear markets. We suggested that stocks were not out of the woods yet, even with the recent rally…

Today’s chart maps the average length of those six bear markets… And it also suggests that we likely haven’t yet seen the worst of the S&P’s downturn that began in September. 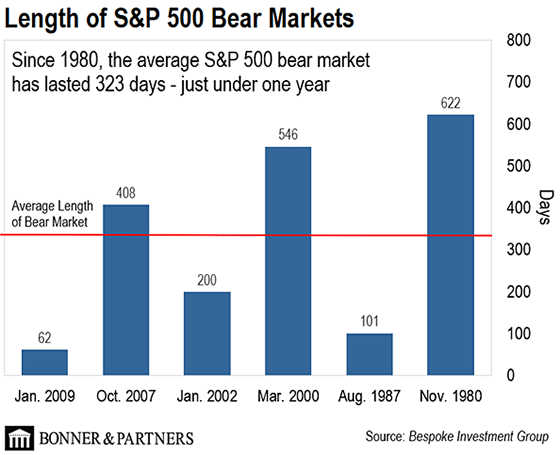 As Bill wrote recently, nobody knows precisely what the future holds. But there are trends and patterns that investors can learn from. It’s possible this could go down in recent history as the third-shortest bear market since the 1980s… but the averages suggest otherwise.

If history rhymes, it’s much more likely that the snap-back rally we have seen since December 24 will fade… and this bear market will fall further and longer before the next bull can commence.

Demand for U.S. Treasuries Drying Up
In order to finance its ever-growing budget deficits, the U.S. government needs to borrow more money. It does this through the sale of U.S. Treasuries. But as the debt sale gets underway in 2019, there’s a troubling sign. Demand is drying up…

Yes, Companies Are Selling Your Location Data
Your cell phone is constantly communicating with nearby cell phone towers. In essence, your phone is broadcasting your physical location to telecom companies 24/7. But surely, this information is kept secure under lock and key? Nope. Your location data ends up in the hands of some shady companies… and it can be purchased for a few hundred dollars.

In the mailbag, it’s dear readers’ favorite topic: President Trump. Is POTUS the “greatest president ever”? Or is Donald Trump a modern-day Pinocchio?

I don’t see you running for president or doing a better job. In fact, for not being a politician, he’s the best president ever in all of our American history. Stocks and the economy are up again. First, thank God, then Trump.

After reading some of your responses, I think some of your responders need a lesson in reality. Pinocchio is not out to save anyone but his ego. He lies and exaggerates constantly. He has dissed every department in our government. He has ridiculed other government leaders. He has broken our negotiated and signed agreements. He heaps hate on everyone but dictator types. He does not listen to any argument against his shoot-from-the-hip gut feelings.

And a tax break to increase manufacturing? Give us a break. If there was demand, they could have increased manufacturing with effective zero interest rates for years. Did they? No. Are they spending the tax breaks doing so? No. The tax breaks were nothing but a gift to big business, especially the pass-through that Pinocchio has in place. Speaking of which, not increasing manufacturing indicates to me there is no demand for it. Demand is down. Look at the price of copper – demand is down.

Okay, he has an entrenched Deep State, but what is he doing about it but entrenching it more? Yes, he is shaking up government, but not in a nice way. Never mind what he says, watch what he does. Think of the unintended consequences, and think, think, think. And to all who claim they are religious, ask yourself, what would Jesus do?

Are we about to witness the biggest new trend of our lifetime?

Former money manager E.B. Tucker believes over $4 billion will flood into this industry in one day. It’s unprecedented – which is why he’s revealing all the details during a special investment briefing tomorrow at 8 p.m. ET.

The only way to get an invitation to this free event is to sign up now. You can register your email address right here… 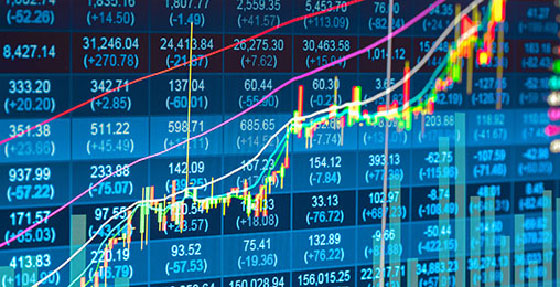