Where the remote Bermudas ride
In th’ ocean’s bosom unespy’d,
From a small boat, that row’d along,
The list’ning winds receiv’d this song.

What should we do but sing his praise
That led us through the wat’ry maze
Unto an isle so long unknown,
And yet far kinder than our own? […]

Thus sung they in the English boat
An holy and a cheerful note,
And all the way, to guide their chime,
With falling oars they kept the time.

HAMILTON, BERMUDA – The English came here by accident, shipwrecked in the 17th century. We came on purpose… to attend an investment conference.

More on that as the week moves along.

Friday’s bounce in U.S. stocks proved disappointing. The market opened with a flood of orders… and sold off the rest of the day.

The old-timers would say it felt like a bear market. After such a big drop on Wednesday and Thursday (Wednesday’s fall was the third-steepest one-day drop of the year), a bounce was almost inevitable.

But a weak bounce, they say, indicates a lack of conviction and usually presages more selling.

Since then, yields are up. Bond prices are down. Is it now time for equities, too?

From the Financial Times:

…with headwinds growing in the U.S. and risks spreading globally, the record-breaking nine-year bull market is surely entering its twilight period.

But for illumination and entertainment, let us turn away from the stock market. Instead, we’ll look at the art market.

Something remarkable happened at a Sotheby’s auction earlier this month.

There, too, some dubious values were shredded – literally.

In the art world, as in the world of cryptocurrencies, an anonymous provocateur has made a lot of people rich. “Satoshi” gave the world bitcoin. “Banksy” gave the world his distinctive form of vandalism.

Banksy, whoever he is, began making his mark – a playful, clever parody of art and politics – in Bristol, England in the 1990s.

He stenciled simple images in black on the side of public buildings. In 2000 or so, we noticed the damage in London, where he continued his trade.

His fame grew, and a lively commerce in his works developed. They were very easily reproduced. But, just as Satoshi created a limit on bitcoin, Banksy invented a way to limit the supply of his art.

He created an agency – called Pest Control – to certify, by no means reliably, when the work was authentic. A prankster and polished ironicist, he fed the art market’s desire to feel trendy and self-referential.

When the money goes, everything goes… and anything goes.

Money is supposed to stand in for real resources – especially time. When fake money takes over, you don’t know what anything is worth. And when the real return on the money you save is zero – or less – almost anything might be a good alternative.

So if sane investors could buy bonds at negative interest rates – implying that they were willing to wait until hell freezes over to make any money – why shouldn’t compos mentis art lovers spend fake money on fake art?

Banksy mocked the silliness of it in 2014, when Sotheby’s auctioned off a gilded frame alleged to be by the artist himself. In it, he had stenciled, “I can’t believe you morons actually buy this sh*t.”

The same might be said for hundreds of stocks and bonds – especially those in the tech sector.

As in the dot-com bubble of 1999, many of these stocks are selling far beyond any reasonable expectation of compensatory earnings. Like squirrelly works of art, people just buy them because it makes them feel cool… and they think they might go up in value.

And the odds were good. The Fed is still lending at or near the rate of consumer price inflation… and the European Central Bank and the Bank of Japan are still offering money at negative nominal rates.

With so much free money gushing into lightweight art and hollow stocks… what else could they do but float?

But eventually, the joke isn’t funny anymore – not when the fake money disappears.

On Friday, commentators talked about money “rotating from stocks to bonds”… as if it were just crossing the street. But fake money doesn’t just move next door.

It leaves town… and never comes back.

A guy buys a share for $50 one day. The next day, he can’t find anyone willing to take it for more than $40. The $10 difference didn’t rotate anywhere. It vanished.

And so, too, a whole market can be pumped up with fake money… and then deflated, like a punctured tire. The money never existed, except as electronic air.

Then, when enough people touch the “sell” key… it’s gone.

Love Is in the Bin

That seems to be what Banksy was trying to say, in his own mischievous way, recently. Sotheby’s put one of his works on auction – a reproduction of his famous Girl With Balloon stencil – in a suspiciously heavy frame.

At auction, it was sold for $1.4 million. But when the hammer came down, an alarm went off and a shredder that had been built into the frame was activated. As the crowd gasped, the “art” was cut to pieces.

We don’t know how the buyer felt about this. Sotheby’s – the market maker – must have immediately called its insurers. Now in shreds, was it worth anything at all?

But the buyer wouldn’t have bid for it at all if she had no desire to be in on the joke.

And in the ensuing media limelight, the prestige and status value of the work may have actually gone up. The “Banksy” in question was a knock-off by an anonymous artist of a rendering by another (perhaps the same?) anonymous jester.

Who knows? The new owner took it in good grace when the artist renamed it Love Is in the Bin. Now, the piece is internationally known… with a provenance recorded on video.

For the first time ever, a mystery artist, remotely controlling a paper shredder, produced an original work right in front of the eyes of the startled crowd.

The buyer might have gotten a good bargain after all. Maybe the result is worth even more than she paid for it.

But we doubt investors will do so well. They won’t feel so cool when they lose money. And once shredded by the bear market, their stocks and bonds won’t be worth a damn.

Editor’s Note: As Bill wrote above, he’s in Bermuda this week. Our editor will be presenting before an audience of subscribers later this week. But if you can’t make it to Bermuda, don’t worry. You can gain access to the live stream of Bill’s presentation right here.

Warehousing and storage jobs have exploded higher in the U.S.

That’s the story of today’s chart, which tracks total jobs in warehousing and storage by year going back to 2009… 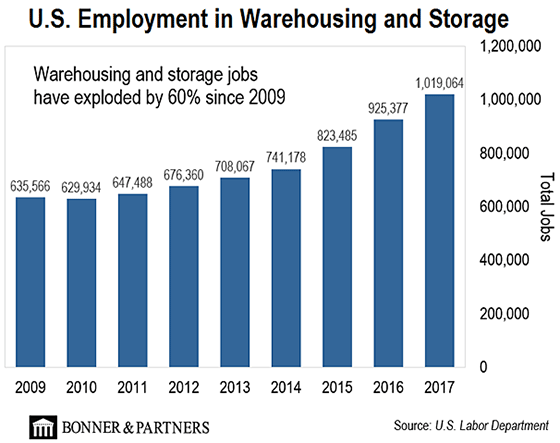 This suggests that the “death of retail” meme is a misnomer. Retail is not dying… It’s just moving online.

Because of that, products are no longer sitting in department stores and storefronts waiting for buyers to walk in… They’re sitting in warehouses waiting for online shoppers to click “Buy.”

Third-party research confirms this. According to data from eMarketer, a New York-based market research firm, worldwide e-commerce sales were $1.3 billion in 2014. In 2017, that figure was $2.3 billion – a 77% jump.

And this trend shows no signs of slowing.

While Sears – one of America’s dominant 20th-century retailers – has filed for Chapter 11 bankruptcy, Amazon, the dominant company in e-commerce, has opened 26 new warehouse fulfillment centers since 2017.

Are Stocks Actually Cheap?
As Bill correctly noted, when measured using traditional valuations, stocks are as expensive as they’ve ever been in the last 10 years. But according to at least one measurement, stocks aren’t expensive… They’re cheap.

Online Censorship Just Took an Unprecedented Leap Forward
With little fanfare, and with almost nobody noticing, online platform companies like Facebook and Twitter purged more than 800 “alternative media” outlets from their platforms. The digital police state may be closer than we realize…

Bitcoin’s “Apple Moment”
In the early 2000s, Teeka Tiwari saw something in tech company Apple. He took a large position in Apple with the fund he managed. The company went on to deliver thousands of percent returns. Now, Teeka sees a similar opportunity… in bitcoin.

In the mailbag, talk turns to Trump and the Fed. And at least one dear reader believes Trump may actually be on Bill’s side…

Trump is on the move, too. He’s pointing his finger at the Fed, preparing to make it the “fall guy.”

At least he’s on your team now. You have been blaming the Fed, and rightfully so, for as long as I have been reading you!

Bill, Trump’s biggest enemy is his mouth, fed by his little-boy ego. I’ll support him if he shuts up.

My friends at the University of Michigan and Michigan State University are frowning at this report. From our perspective, the Fed and Treasury have a track record of interdiction at the wrong times.

There is some truth in global/foreign government money interference. There’s some truth in private and globalist banking manipulation of democratic foreign money and geo-political intentions to undermine America.

True enough, printing and injecting monies is fashionable and good for political and geo-political agendas in the likes of the previous administration(s). Artificial influx of monies, artificial numbers, artificial gains = huge corrections. Tax cuts work. Except, the opposite is true on the psychological side. Negative media reporting, false speculation, etc. To be continued…

Meanwhile, a Dear Reader encourages Bill to take a closer look at communism…

Quite a lot of East Germans majorly regretted losing their communist status for a long time! How can you write this essay without comparing the advantages and disadvantages of both communist and capitalist systems?

Good news… You don’t have to go to Bermuda. 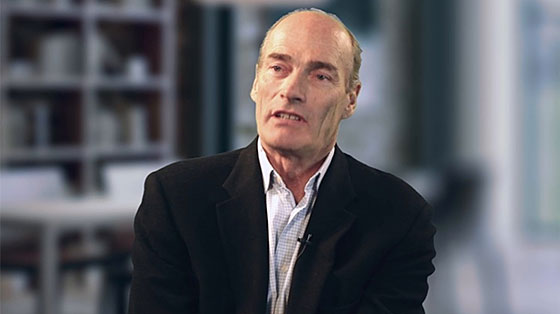